Societies have different beliefs that are considered as the basis of their existence. They are the morals that govern the behaviour patterns and as far as the community is concerned, they also serve as the grounds of what is right and what is wrong. In philosophy, there are certain theories that have been formulated to describe extensively on the ethical virtues that the community upholds. They justify morality and immorality. The theories include; relativism, utilitarianism, divine command theory, deontology and virtue theory.

This paper will focus on the five ethic theories by describing them and major solely on one theory that supersedes the others and justifying the reasons why it is commonly considered.

Cultural relativism is the descriptive view that different groups of people or cultures, have different ways of evaluating what is right and what is wrong. In different cultures, even when we would anticipate to agree on some issues of morality, diversity is evident (Ruth, 2010). Ethical relativism, an action is right or wrong depending on the moral norms that are practised in a society.

Ethical relativism argues that the ethics of a society evolve with time and change to fit circumstances. This paper will focus on the five ethic theories by describing them and major solely on one theory that supersedes the others and justifying the reasons why it is commonly considered.

Utilitarianism states that an action being morally right or wrong is dependant wholly on its consequences. An action is right if the outcome is best and wrong if the outcome is bad. In this theory, an action is right if it promotes the happiness of the performer of the action and everyone affected by it (Boylan, 2009). An action is wrong if it brings the reverse of happiness, that is, pain and sadness. This theory makes it possible for the right thing to be done from a bad motive. The utilitarianism theory is often associated with John Stuart Mill, a philosopher who stated that “actions are right to the degree that they tend to promote the greatest good for the greatest number.

Divine command theory views that moral obligation consists in obedience to God’s commands. An act is moral if God commands us to do it and it is immoral if God prohibits us from doing it (Brown, 2001). Therefore to say that it is good to tell the truth is semantically equivalent to saying that God commands us to tell the truth. Similarly, to say that it is evil to steal is the same as saying that God prohibits us from stealing. The divine command theory is however wildly improbable for reasons demonstrated by the Euthyphic dilemma. As it states, “is an action morally good because God commands it or does God command it because it is morally good?” By saying that God commands an action because it morally good, threatens the independence of God. It means that the unprejudiced ground of morality is outside of God, and He is indebted to adhere to his standard, and thus He is not sovereign.The characteristic Christian rejoinder to the Euthyphro Dilemma is to ground goodness in God’s nature. Therefore, it is God’s nature to do good and He never acts divergent to His nature and also, the ground of morality is not some peripheral ordinary to which God must observe.

Deontological ethics can also be referred to as duty-based ethics. It arbitrates morality by scrutinising the nature of actions and the agents will instead of the goals achieved. For deontology, whether a situation is right or wrong depends on the action that resulted in the situation for example, a deontologist would argue that it is wrong to lie to a murderer about the location of a victim. As long as we are following our duties, we are behaving morally and vice versa. In order to make the correct moral choices, we must understand what our moral duties are and what correct rules exist to regulate those duties. Deontological theories have been named as formalist due to their central principle lying in the conformity of an action to some rule or law.

The first philosopher to define deontological principles was Immanuel Rant, who held that nothing is good deprived of experiences with the exception of a good will, which is one that wills to act in concurrence with the moral law and out of respect for that law, rather than out of natural dispositions. The important thing is whether the person is expressing good moral virtues or not. The issues whether the intention is right, the correct rule is being followed or whether the consequences of the action are good, are not relevant. A virtue atheist is likely to advise you to act in the same way as a virtuous person in the given situation. The character of a person is the outcome of his or her character traits which can either be good, bad or somewhere in the middle. Virtues are the admirable character traits while the opposites of virtues.

Ethical relativism indorses right and wrong rooted in an individual’s culture and not an individual’s beliefs whereas virtue ethics acquaints a person’s character as indication of inherent goodness, rather than gauging the results of actions executed by that person. It supports the theory that a bad person can have good actions. The motives of an action regulates the value or goodness of that person in spite of the outcome of the actionEthical relativism discards absolute moral values because of a lack of proof. People’s behaviour finds provision from where and how they live, unlike the virtue theory where people’s behaviour finds provision from their character traits and goodness.

According to utilitarian theory, the one thing that brands an act morally right or wrong is whether or not the consequences are beneficial. On the other hand, virtue ethics is of the impression that a morally right act in some state calls for a moral choice is what a virtuous person would do in that state. For example, if a person is sick and goes to the hospital for treatment, the doctor is morally right to kill the patient and give his organs to other patients who need them to survive. This, is in accordance to utilitarian theory. However, this is wrong because it is taking away someone’s right to live for the motive of making other people happy.

Even though deontology and utilitarianism are categorised as “ethics of conduct,” they differ in their ethical theory. Deontology indorses an action based on a moral law or code, while for utilitarianism an action that gives the best consequences or happiness to the action is right. Virtue ethics is categorised as “ethics of character” and it is focused on how people should be instead of the actions people should perform (Moore, 2009). Virtue ethics should be the ethical motivation in a person’s life. He or she should use levelheadedness abilities to regulate their duties based on virtues and also the universal rules and schemes that guarantee justice and fairness for everyone. Listening to one’s intuition in order to determine the greatest good as well as the virtues that will best serve the society is the best way to ensure this justice and fairness. A human being should not have right over another person’s life because everyone is equal. 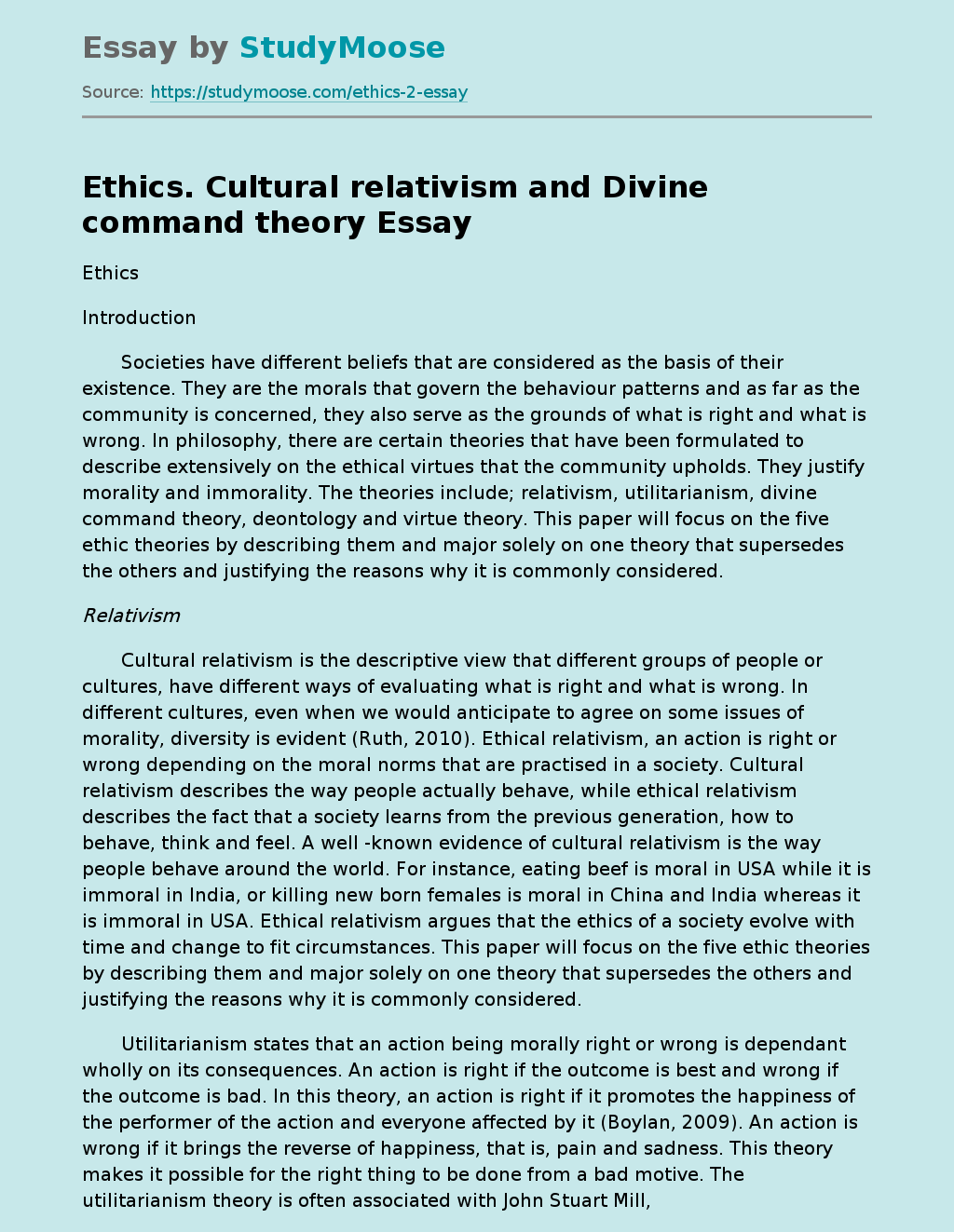