How does Shakespeare create dramatic tension in Act 4: Scene 3?

Shakespeare generates an atmosphere filled with dramatic tension and apprehension creating an emotional and psychological conflict between the characters, using a variety of different techniques, including his use of language and stage directions in his romantic but tragic play ‘Romeo and Juliet’.

The most obvious situation where Shakespeare displays this type of tension is when Juliet demonstrates her strength whilst developing into a self-confident, faithful, and capable woman, previously being an obedient and sheltered child. Juliet requests the Nurse and Lady Capulet to let her spend the night prior to her wedding by herself, ‘I pray thee leave me to myself to-night, for I have need of many orisons’ (Act 4: Scene 3: line 2-3) displaying glimpses of her determination and strength, by purposely lying to the adults, giving the audience an impression of betrayal and disloyalty towards her parents.

Don't use plagiarized sources. Get your custom essay on
“ How does Shakespeare create dramatic tension in Act 4: Scene 3? ”
Get custom paper
NEW! smart matching with writer

During this point Shakespeare hasn’t given they Nurse any lines to respond to Juliet, expressing the fact that the tension between the two of the women is growing, and has begun to disperse since the Nurse feels guilty, knowing that it was somewhat her fault that Juliet was about to commit bigamy.

Juliet continues ‘…upon my state…full of sin…you let me now be left alone…in this so sudden business…’ (Act 4: Scene 3: line 9 and 12) at this point being proactive demonstrating disrespectable behavior towards her mother, blaming her for the fact that she never bothered postponing the wedding, resulting to Juliet’s current situation. Juliet describes her situation relating it to religion, as ‘my state full of sin’ using the noun ‘sin’ relating herself to evil and immortality, explaining that she is feeling affronted and offended, referring back to her betrayal towards her parents ‘in this so sudden business’.

The strong adjective ‘sudden’ describes the unexpectancy and anticipation, followed by the adverb ‘so’ to such an extent explaining the future prospect of her marriage.

Juliet isn’t in the position to disobey her parent’s demands once they have agreed to Paris’s proposal of marriage, and so takes the only option that seems open to her; faking her own death. Shakespeare’s technique of using props also adds tension as Juliet repeatedly questions herself about the atrocious and indecisive act she is about to perform. The tension increases when she reaches out for the poison ‘Come vial’ (Act 4: Scene 3: line 21) using the imperative ‘come’ suggesting that she is welcoming her death whilst hesitating with uncertainty about the consequences. At this point the tension increases since the audience is eager to discover her intensions, illustrating her astonishing sovereignty, as she makes her ultimate decision to drink the potion.

In this scene she could be fearfully staring at the vial with increasing anxiety, hesitating to drink the poison that would revolutionize her future, giving the impression to the audience that she is willing to leave her family and is prepared to take full responsibility into her own hands, without relying on ‘….God knows…’ (Act 4: Scene 3: line 14). Similar to Lady Macbeth in Shakespeare’s play ‘Macbeth’, where she takes advantage of her husband, displaying her strength as she develops the confidence to make her own decisions to gain uncontrollable power. Similarly, Juliet is also no longer playing the traditional, subservient role of a respectful daughter and by demonstrating her strength she goes against what is expected of a woman during the Elizabethan period.

She continues questioning herself ‘What if this mixture do not work at all’ (Act 4: Scene 3: line 21) doubting her trust between the Friar and continues ‘No, no. This shall forbid it’ (Act 4: Scene 3: line 23) referring to the dagger, symbolizing the absolute certainty and conviction of her death, increasing the tension. In this scene she could be shaking her head, whilst saying the words ‘…No, no….’ in an uncompromising and demanding voice. The adjective ‘This…’ could be said in a more pleasing but rasp voice whilst she cautiously stares without blinking at the weapon of death, since she has now found a solution if the potion concedes to react. The tension increases, since she has now established a more excruciating way to die, being glad to have found a solution to her dilemma, whilst displaying her increase in confidence. The interjection ‘no’ expresses her denial and refusal to believe that she will survive and carry on with her life without Romeo. The tension strengthens, as Juliet confidently proves that she has the ability to accomplish her destiny, exemplifying her determination to endure the agony of death, regardless of what it takes to reunite with Romeo. The use of the strong verb ‘forbid’ continues to emphasize her strong sense of determination and willpower, prohibiting and refusing to allow her to live, without her husband.

Although Juliet places her trust on the Friar, she continually hesitates before taking the potion, irrationally questioning herself ‘What if it be poison…subtly…ministered…to have me dead’ (Act 4: Scene 3: Line 24-25) displaying the lack of trust. The use of rhetorical questions add tension and explains to the audience that Juliet is once again uncertain and doubtful about taking the potion and placing her trust on the Friar. The adjective ‘subtly’ exemplifies the fact that she portrays the Friar deceitful and devious, ingeniously ‘ministering’ the poison into the potion to eliminate her, increasing the tension. Juliet hesitantly finds a coherent solution ‘I fear it is; and yet methinks it should not’ (Act 4: Scene 3: Line 28) the use of repetition ‘I fear it is’ creates tension as it is also monosyllabic and a short line. Juliet could be saying the first part of the line in a quite and fearful voice desolately glancing at the potion and saying the second part with a hint of assurance, displaying her confidence. This gives the impression that Juliet is battling her emotions and sanity, trying to understand and come to a decision whether or not to trust the Friar. Juliet’s growing affection to reunite with Romeo is desperately urging her to take immediate action, using any source of assistance, making it clear that her loyalty, trust and devotion lie only between her and Romeo.

Minutes before drinking the potion, Juliet makes it apparent to the audience that she hasn’t made a definite decision whether or not to risk her life taking the potion and face the chances that Romeo might be unable to rescue her. She is extremely fearful ‘…come to redeem me?….a fearful point!…’ (Act 4: Scene 3: Line 32) demonstrating her fear of isolation and seclusion. Her use of rhetorical questions as she discusses her death followed by the exclamations mark creates suspense and shows the increasing anxiety within her thoughts. The exclamation mark ‘a fearful point!’ explains that Juliet has spoken suddenly to express her trepidation and uneasiness. It also adds tension and shows the increase of pace in her speech, as her anxiety and nervousness increases. The adjective ‘fearful’ conveys to the reader that Juliet is distress caused by the approaching danger understanding that something undesirable and unpleasant will occur due to the future consequences of taking the potion.

Shakespeare’s descriptive language and Elizabethan vocabulary also adds tension as Juliet begins to agonize, losing her sanity ‘…be stifled in the vault…die strangled…conceit of death’ (Act 4: Scene 3: Lines 33, 35, 37) using the verbs ‘stifled’ and ‘strangled’ expressing the fact that she will eventually die in a most atrocious and dreadful way. Juliet can be presenting these lines in an extremely timid and hesitant manner, quivering with dread, displaying fretfulness and anxiety as her confidence and independence is gradually devoured. She continues ‘…buried ancestors packed…….but green in earth…….festering……with loathsome smells….’ (Act 4: Scene 3: Lines 41-43, 46) imaginatively describing the surroundings of the vault, giving a clear image to the audience whilst increasing the tension.

The verb ‘packed’ exemplifies the abundant corpses and also describes them ‘green’ and ‘festering’ giving the impression that the bodies are unsullied, most of them being horribly decomposed. This clearly leads to the cause of Juliet’s hallucinations as she becomes delusional ‘Stay, Tybalt, stay!’ (Act 4: Scene 3: Line 57) as she converses with her dead cousin, illustrating the fact that she is agitated and perturbed, not being able to control her emotional state, similar to Macbeth as he hallucinates seeing Banquo, whilst he constantly questions himself about his betrayal and disloyalty. This line is monosyllabic and includes imperatives ‘stay’ suggesting that she’s giving an extremely important order, begging her cousin not to haunt and torment her or Romeo’s lives, increasing the tension. The exclamation marks suggest that she’s startled and most probably delivers these lines using a desperate voice.

In conclusion, Shakespeare has presented numerous areas displaying dramatic tension in this scene, as Juliet dramatically transforms into an assertive woman, previously being an anxious and nervous teenager. The most obvious is when Juliet goes against what is expected of a woman during the Elizabethan period, displaying the fact that she’s able to think for herself, make her own decisions and having the courage to act independently whilst scheming her impetuous future to be with Romeo. Her trust between her family and loved ones collapses once Romeo is banished from Verona, resulting to her irrational but audacious actions to reunite with him. In general, Shakespeare portrays Juliet as a courageous woman of beauty and strength, battling against the powers of her family and a path full of perplexing obstacles, to lead a content life with her beloved husband. Unfortunately, her tragic ending reflects upon her commitment and dedication towards her marriage as she desperately followed her heart, guiding her towards her death; the ultimate destiny.

How does Shakespeare create dramatic tension in Act 4: Scene 3?. (2020, Jun 02). Retrieved from https://studymoose.com/shakespeare-create-dramatic-tension-act-4-scene-3-new-essay 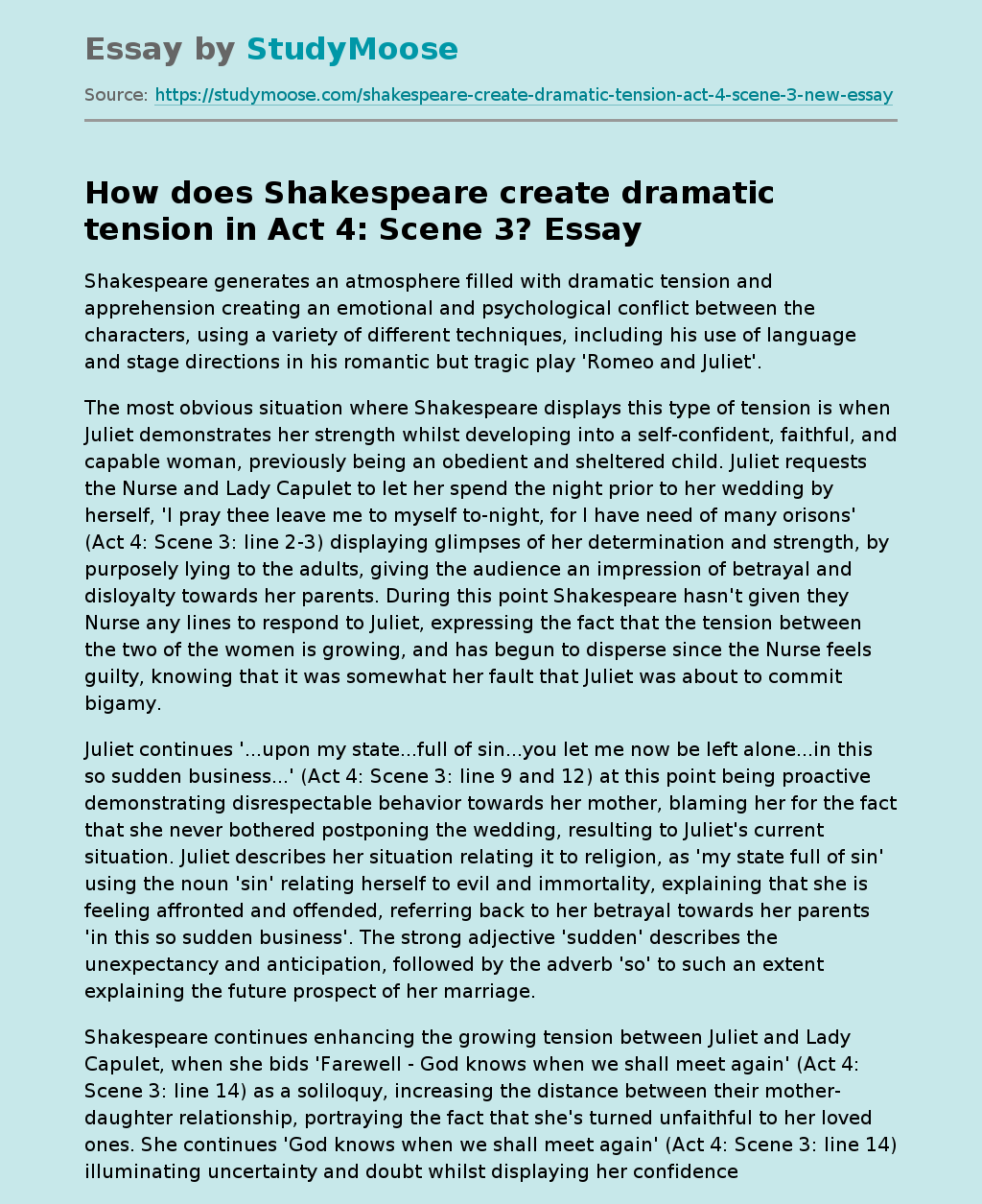