Arthur Miller creates a lot of dramatic tension in the courtroom scene of Act Three. Throughout this essay I will discuss how tension is built through melodrama, anti climax, character vulnerability, motives and positioning. Focus will be on language, stage directions and effect on the audience. Initially, I would like to review the melodrama in act three and examine how it creates tension and how this impacts upon the audience.

The main part of the courtroom scene is based on melodrama and involves Abigail and all of the other girls, that have admitted seeing the devil, shout out about a yellow bird on the beams spreading its wings.

Don't use plagiarized sources. Get your custom essay on
“ Create Dramatic tension ”
Get custom paper
NEW! smart matching with writer

Of course they had lied to everyone so that lots of people were accused of being witches and for using witchcraft against them in order that they could see the devil. The reason why the audience are so captivated with the courtroom scene is because Abigail’s secret, that she is the one using witchcraft, is almost revealed to everyone.

All those people who were in jail, having been accused of being witches by Abigail and the other girls, should have found out that they could be freed because Abigail and her friends had invented a tissue of lies.

Not surprisingly, John Proctor is driven to the point of insanity and gets himself arrested for meeting with the devil. He laughs insanely and then delivers this quote: “A fire, a fire is burning! I hear the boot of Lucifer, I see his filthy face! And it is my face and yours Danforth!” The man he refers to, Danforth, was a religious man, but after this incident quits his job.

The main anti-climax event was a when Abigail’s secret was going to be revealed by her friend Mary, but in the end her secret remains hidden from the people of Salem. As the author builds the tension for the audience Abigail lies her way out of the situation by claiming that she can see the devil in the form of a yellow bird.

The characters vulnerability is the next topic for discussion. A lot of the characters in this play are vulnerable because they are hiding secrets, for example John Proctor having a relationship with Abigail. Abigail is very upset when John Proctor is arrested for adultery because he had an affair with her whilst he was still married to Goody Proctor. When Goody found out Abigail, who was her maid, was kicked out of the house. Abigail still loved John Proctor and, as we found out, would do anything to get him back. However, John Proctor still loved his wife and would do anything to win her back.

Another example of character vulnerability was when John Proctor saw his daughter dancing in the forest with Abigail and the other girls. However, he did not tell the court this as he did not want to get his little girl in trouble and tarnish her with the same brush as the others. Likewise, as a lot of the characters have motives behind their behaviour, for example Abigail blaming Goody Proctor so she will get punished and hopefully, in turn, John would become Abigail’s again, this leads them to be more vulnerable and wary of those around them.

Character positioning is probably the most tension building factor in Act Three. Abigail and John Proctor are looking at the judges rather than facing Goody Proctor. This builds up dramatic tension because Goody doesn’t know that if she tells the truth then her husband would be arrested and Abigail would go free. The dramatic tension in this scene continues to build as she takes an inordinate amount of time before she decides to lie for her husband.

Religious Ideology means that they all believe in a God and that he is to be honoured and obeyed. They all try to follow the Ten Commandments, for example thou shall not steal, thou shall not commit adultery and thou shall not lie. This Religious Ideology is an important factor in The Crucible as the judge and the villagers are torn between the religious law and common sense when it comes to establishing who is involved with the devil. This causes dramatic tension in that Abigail is breaking the law by lying, but the judge can’t do anything about it as he has no proof. All he can do is obey the law. Arthur Miller uses these different techniques extremely successfully in Act Three. He builds up a lot of tension, which keeps the audience captivated on a number of emotional levels. 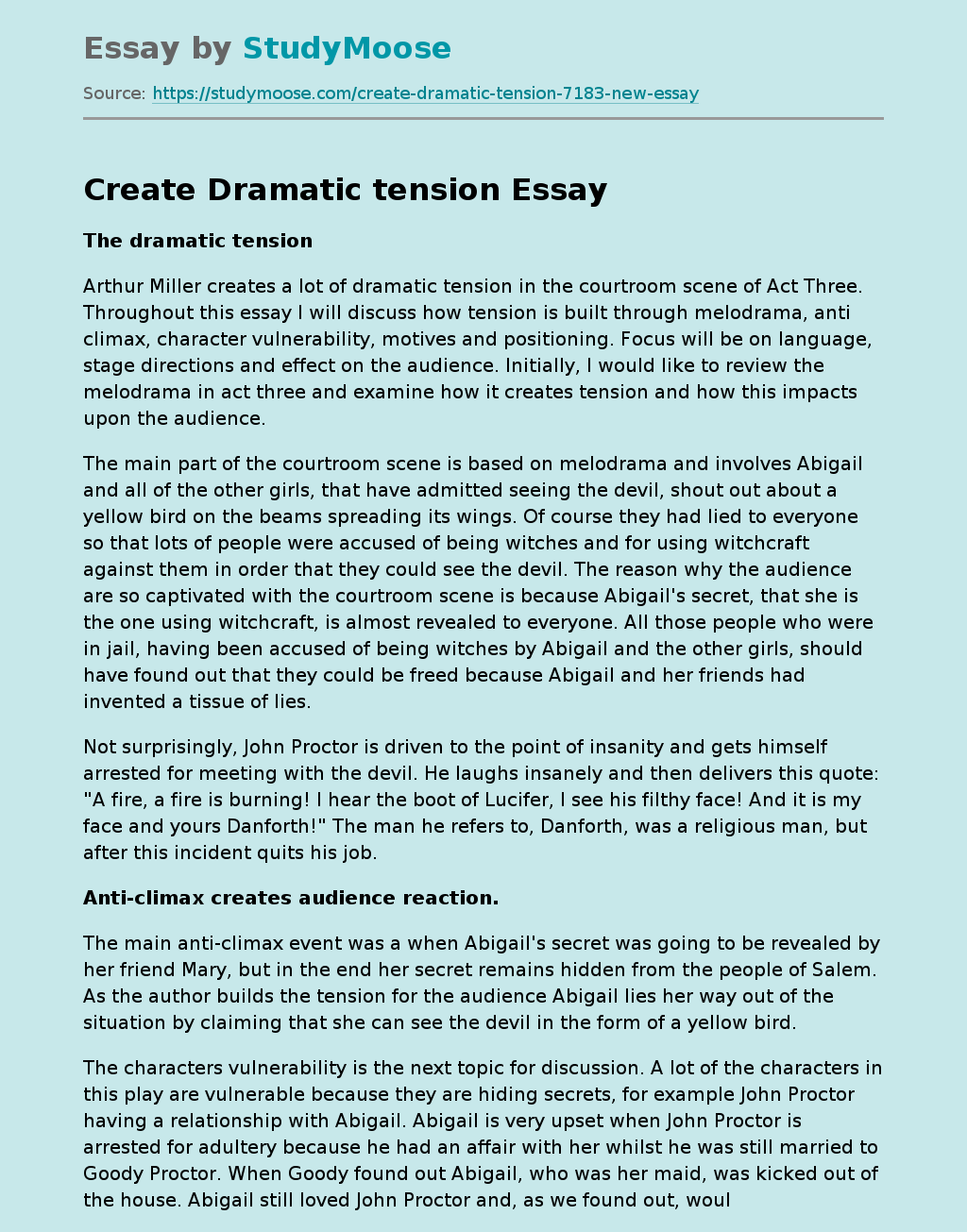