How Shakespeare creates tension In Romeo and Juliet?

William Shakespeare cleverly keeps tension in Romeo and Juliet by going immediately into the play, in the prologue he summarises the whole play, including the fact that Juliet a Capulet and Romeo a Montague are the lovers and that they die but the tension is kept because he does not say how the lovers die and that keeps the audience in suspense because they would want to know how the lovers die. He also keeps the tension in the play by bringing in comedy characters for example the nurse.

Don't use plagiarized sources. Get your custom essay on
“ How Shakespeare creates tension In Romeo and Juliet? ”
Get custom paper
NEW! smart matching with writer

The nurse is one of the main comedy characters she keeps the tension in the play by delaying important for Juliet; the nurse says teasing Juliet “Henceforward do your messages yourself” which shows how Shakespeare is making the nurse keep the tension. Shakespeare also creates tension in the play by presenting Romeo as inconsistent. All his friends tease him about how easily he falls in love; they do not take him seriously for his love for Rosaline.

Friar Lawrence calls him a “young waverer” when he hears that Romeo is in love with Juliet, he was shocked when he first heard about Romeo’s love for Juliet , he says “Holy Saint Frances, what a change is here!, is Rosaline, that thou didst love so dear”, he thought Romeo loved Rosaline so much that nothing could compete with her.

The audience are shown that Romeo can be unreliable in love.

Even more tension is added because Juliet is very anxious that Romeo might be a false and untrustworthy lover, especially as she revealed her true feelings without knowing he was listening ; “oh Romeo, Romeo! Wherefore art thou Romeo”, she also said “if thou swearst thou mayst prove false” and begs him to say he loves her and to “pronounce it faithfully”. Juliet also wants Romeo to prove his love for her by marrying her, he agrees and they arrange a meeting to get married and the tension is created they decide to get married without there parents knowing.

Tybalt (Juliet’s cousin), known as a fighter with his obsession of the feud between the Capulet’s and Montague’s also adds tension to the play, in a public place he sees Mercutio and Benvolio (friends of Romeos) and challenges Mercutio to a fight, just then Romeo enters, (after being married an hour ago) he and Benvolio tries to stop them fighting but they don’t stop and Tybalt wounds Mercutio fatally and leaves quickly. Mercutio in pain ill-wishes both the Caplets and Montague’s, cursing them saying “A plague o’ both your houses”, he is also saying this was not his fault. He dies some time later. Romeo angry blames himself for what happened to Mercutio and wants to avenge him, he says “In my behalf my reputation stained-Tybalt, that an hour hath been my cousin, O sweet Juliet thy beauty hath made me effeminate”.

Romeo is saying that being with Juliet had softened his temper and made him soft-hearted, and now he was going to strike back and kill his friend’s killer. Tybalt returned and he and Romeo started fighting, Tybalt dies. Benvolio quickly tells Romeo to flee the country before he awaits death; “Romeo away be gone”. Romeo says “O I am a fortunes fool” he is angry at himself for losing his temper, he is also worried because he was just married earlier on to Juliet and is meant to meet her. Romeo disappears as citizens appear. The Prince enters with the Montague’s and Capulet’s, he makes Benvolio tell him what happened, and then he says “who now the price of his dear blood doth owe? The Montague’s defended Romeo and the Capulet’s defended Tybalt so the Prince decided that Romeo was exiled from Verona and if he was seen he would be killed. The tension is kept because Romeo just killed Juliet’s cousin and now he is exiled how was he going to see Juliet again.

How Shakespeare creates tension In Romeo and Juliet?. (2020, Jun 02). Retrieved from https://studymoose.com/shakespeare-creates-tension-romeo-juliet-new-essay 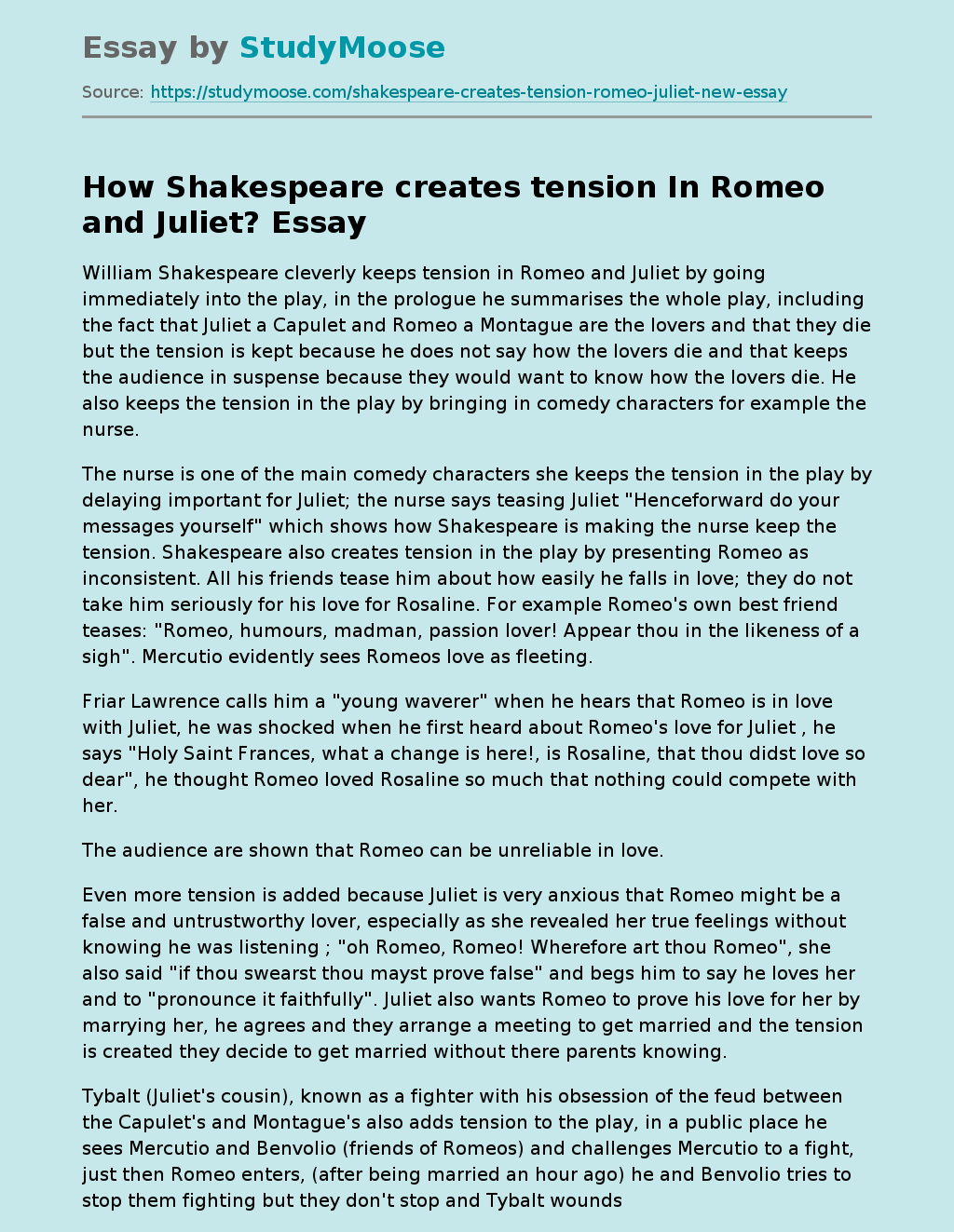