"Naming of parts" by Henry Reed, and "War is Kind" by Stephen Crane

“War…ouhh….What is it good for…absolutely nothing!” sang Edwin Starr in 1965. He felt the same vibe that both Henry Reed and Stephen Crane felt in their poems, “Naming of Parts” and “War is Kind.” Although these authors may not have said it as straightforward as Starr did in his hit single “War,” they still had just as much hatred of war. Both Reed and Crane have developed their perspectives on war through their writing styles, their usage of figurative language, and their attitudes toward war in general.

Don't use plagiarized sources. Get your custom essay on
“ “Naming of parts” by Henry Reed, and “War is Kind” by Stephen Crane ”
Get custom paper
NEW! smart matching with writer

Henry Reed and Stephen Crane both have very different writing styles. Reed’s style in “Naming of Parts” is built upon juxtaposition. Guns and gardens, soldiers and bees: the poem relates the unrelated in order to draw a clear line between the horrors of war and the fruits of nature. However, the poem goes further than just contrasting opposites. The structure and language of the poem combine to show how one should become the other in hopes that the harmonious image of this Eden transforms the unnatural feat of war.

His overall structure also serves to make nature better. Each stanza is split between the dry, unimaginative language of the first speaker, probably the drill sergeant, and the poetic language used by the second speaker to describe nature.

In every stanza, the gentle and peaceful language of the second speaker is quite dominant over the monotone voice of the drill instructor. This shows that war disturbs the balance of nature. Stephen Crane, in “War is Kind,” develops his style by using vivid imagery and irony.

Through doing this, he leads the reader directly to his perspective of war. He feels war is a horrible way to solve problems and uses irony to tell us that war is blatantly stupid. Nothing good has ever come from it and nothing ever will. The American flag, “The unexplained glory, flies above them” to symbolize that the glory they were fighting for was not earned righteously, it was stolen by “these little men…born to drill and die.”

Both authors also heavily use figurative language to help create a picture of what they saw in their minds as they wrote these poems. Henry Reed’s entire poem is entangled in figurative language. He shows us a perfect balance of the world of nature in the sections of the poem that describe the garden. The garden is a symbol of life and beauty: a magical place, “silent” and “eloquent.” In the garden, we see the personification of branches which “hold in the gardens their silent, eloquent gestures.” We are told of blossoms that “are fragile and motionless, never letting anyone see / any of them using their finger.” We also witness bees “assaulting and fumbling the flowers.” These examples of figurative language create a picture in our mind to which Reed can build his theme upon. Crane uses more subtle figurative language to get his point across in “War is Kind.” The excellent use of irony draws us to his imagery and metaphors. The metaphor in the middle of the second stanza helps point in the direction of the true meaning of the poem. “And his Kingdom – a field where a thousand corpses lie,” proves that all of the dead bodies after the war do not belong there. This world is God’s creation and war was not part of His plan.

In “War is Kind” and “Naming of the Parts,” both authors’ attitudes toward war are similar but only on the basic level. They both believe war is a tremendous waste of time for it solves nothing at all. For Stephen Crane, this deeply ironic poem is not only an attack on war and all of its horror but also a statement against violence of any kind. This includes the violence that we observe daily, mans inhumanity to man, and the rage and fury within our own hearts, which are equally as destructive. The poem comments on “those little souls who thirst for fight”, who find virtue in something as horrifying as slaughter and excellence in a field of a thousand corpses. In “Naming of the Parts,” Reed tells of the instructor that insists that the men “not let [him] / see anyone using his finger”. At the end of the same stanza, the blossoms are seen “never letting anyone see / any one of them using their finger”. Although not directly stated in the poem, perhaps the soldiers should take a cue from the blossoms, and in turn nature, not to use their fingers, especially on the trigger. This contributes to his negative view of war. He structures nature to be more powerful than these soldiers and in turn society. Nature’s “silent” and “eloquent” state of being show that war should never be used as a solution to a problem.

Although both of these poems were in some way about the topic of war, each author has developed their own way of conveying how they feels through their unique writing styles, how they use figurative language, and their own attitudes about war. Imagine what the world would be like if only we stopped and actually thought what we were doing. Maybe then we would realize, like Edwin Starr and these two authors did, that war is not the solution to the problem, but instead the root.

"Naming of parts" by Henry Reed, and "War is Kind" by Stephen Crane. (2016, Jun 21). Retrieved from https://studymoose.com/naming-of-parts-by-henry-reed-and-war-is-kind-by-stephen-crane-essay 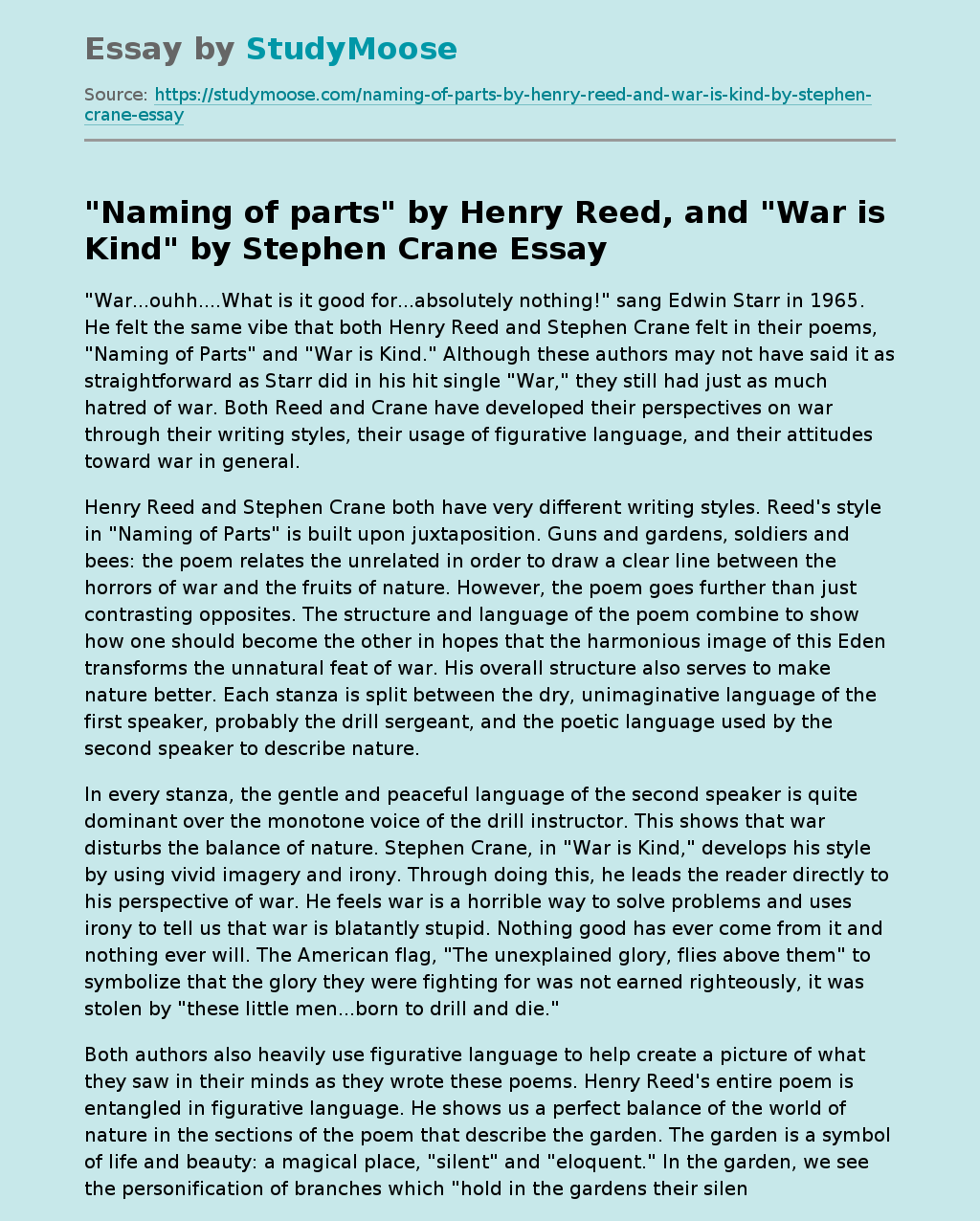