In Stephen Crane’s short story of “A Dark Brown Dog”, he writes about a young boy who finds, neglects, and befriends a ragged puppy, with a rope dragging the ground, when they meet. The boy takes fun in abusing the puppy, but when he tires of this he makes his way home. The puppy, even though the boy was not nice, starts to follows the boy home. When arriving home the boy defends the puppy to claiming him as his own.

Don't use plagiarized sources. Get your custom essay on
“ “A Dark Brown Dog” Analysis ”
Get custom paper
NEW! smart matching with writer

The boy’s father agrees to allow the boy to keep the puppy. The boy and the puppy grow very fond of each other. The puppy was abused but always showing his love even after his abuse. Then the story takes a very sad, gruesome turn for the young dog. The story tells of a very young boy who lives in a fifth story apartment in a very run down area of a big city. The father is portrayed to be a violent man that regularly is in a drunken rage.

His wife and family are the victims of his rage. “A Dark Brown Dog” describes how the young boy finds safety under the kitchen table on regular bases. The story draws attention to the father coming home and going into his usual drunken rage on the wife, kitchen utensils, and furniture, then the father takes joy in turning his rage on the pup.

When the boy comes home during the rage he goes for his safe place but the puppy does not understand the rage and becomes the victim of the drunken rage.

The story tells that the father takes great fun in kicking and hurting the pup. His final fun and torture he picks up the puppy by the leg and swings the pup around in the air several times. The young boy tries to detest the cruel punishment, but it does not work as the father then throws the pup out the window of the fifth story apartment. The story details the neighborhood that no one really thought it was unusual that a puppy was being thrown out a fifth story window. In a literary analysis of “A Dark Brown Dog” written by Braden Davis, he states that his interpretation of the story is from the slavery times known as the Jim Crow era. Branden states that “the boy, his father, and the dog were symbols in this classic retelling of the reconstitution period known as Jim Crow”. (1) Braden’s analysis was a very deep reading on what he saw behind the story. But after reading deeper into the life of Stephen Crane it is very easy to see that “A Dark Brown Dog” is the story based off what Crane witnessed on the streets.

The young boy lived in a very run down part of the city in a fifth story apartment; tales of the father coming home and abusing not only the dog but his family as well. Argument is based off the Biography of Stephen Crane, he lived a bohemian lifestyle for a while living in poverty and had firsthand experience with street life. Crane also was known for living in the “bowery” section, which was a down trodden tenement districts. Crane’s other stories had recognition for writing brutally honest stories about life experiences. Crane was also known for his plot less stories due to him writing about experiences he was either involved in or witnessed with his own eyes. Being known for writing what he saw and experienced gave Crane his recognition in his book “Maggie: A Girl of the Streets” was said to be a very brutal story of a prostitute that lived on the streets. Crane’s eye for detail gives “A Dark Brown Dog” full life; that this was just a short story based off of what he experienced while living on the street.

He wrote about the life of a little boy that he watched and the tragedy that the boy had to deal with in his young life. Speculation could also raise questions that this could have been a story from Crane’s life as well. His biography told he was the youngest of 14 children. Although his father was a reverend and his mother was a busy woman with her children and was said to be a writer herself. Being in a household with this many children could have led to a lonely existence that left him on his own to see the world as cruel and uncaring. This story was a tale told of abuse and neglect from a broken drunk that took pride in showing his dominance of his family and an innocent animal. Braden’s analysis was based on the time and situation but read into more than looking at what was on the surface of the story. The research of the biography tells that with the history that Crane had and the life that he experienced himself. 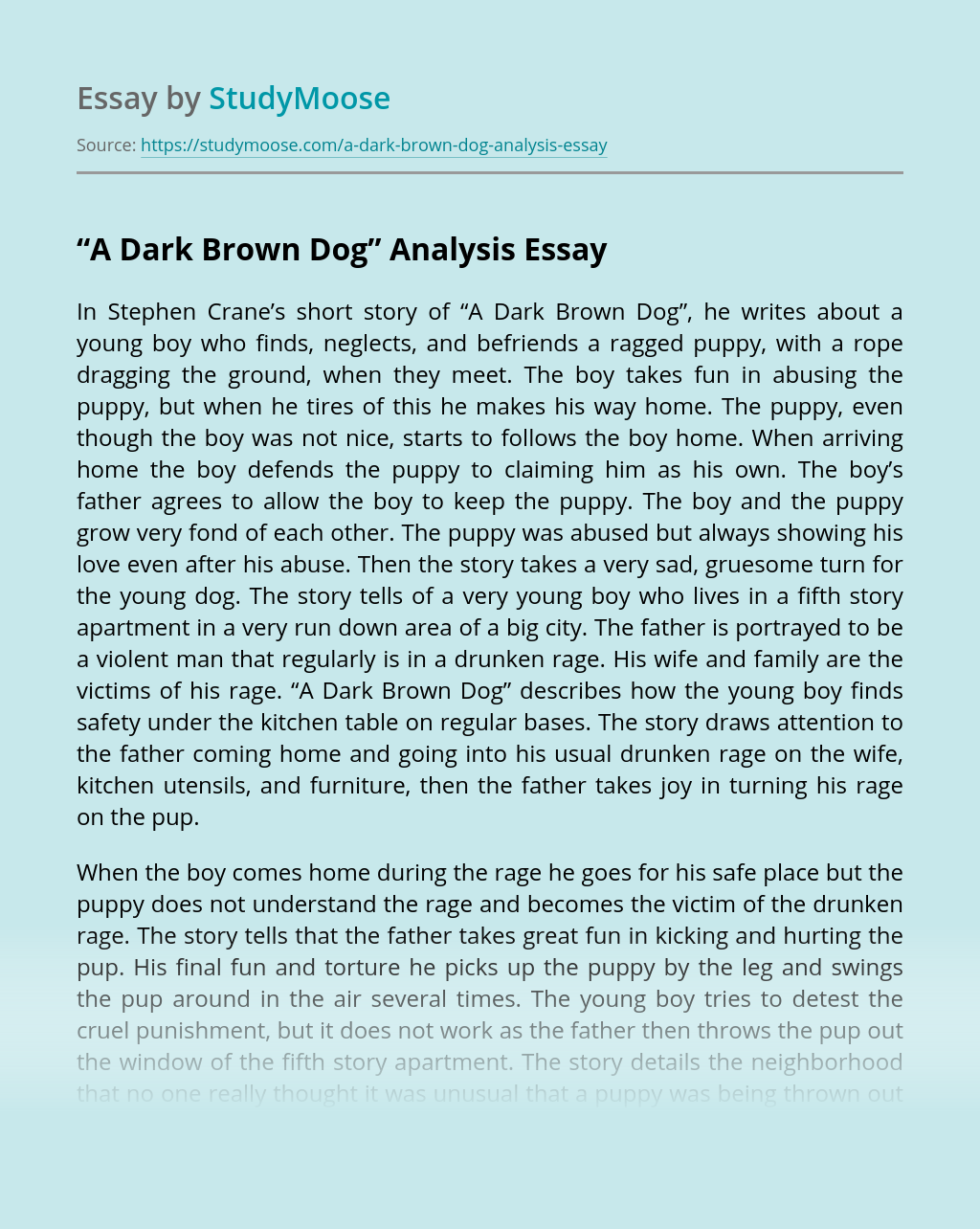