Naturalism in Stephen Crane's Maggie: A Girl of the Streets

Naturalism in Stephen Crane’s “Maggie: A Girl of the Streets” “Maggie: A Girl of the Streets,” is a novella written by Stephen Crane and published in the year 1893. This work was published during the time of the Industrial Revolution, when factories were appearing everywhere. Their workers were often not paid enough to lead a decent life, and suffered from their situation. They were not very civilized and sometimes aggressive in their behavior.

Perhaps because of this radical change from a more agricultural lifestyle to one of industry and factories, some pieces of literature were starting to transition from the classification of Realistic writings to works that are now categorized as works of Naturalism.

Don't use plagiarized sources. Get your custom essay on
“ Naturalism in Stephen Crane’s Maggie: A Girl of the Streets ”
Get custom paper
NEW! smart matching with writer

While the two categories are related, Naturalistic works often are based in urban landscapes and focus upon the poor and less educated; whereas the character focus and settings of Realistic works were ordinary people living in both cities and small towns.

Crane’s novella was written right as the literary movement of Realism ended and Naturalism began, and understandably includes elements of both movements.

Crane’s story, though, can be concretely set in one category. His story occurs in urban New York. The plot of it is set on a community of its poor residents who cannot change their situation. The themes and tenets used in this work, as well as the aforementioned setting and plot choices, concretely set this novella in the classification of a work of Naturalism. Crane uses foreshadowing to allude to storylines that are created and events that occur later in the story.

In the opening of the novella, we are greeted with a scene of a bloody and intense fight. Those involved are mere children, who are fighting intensely and drawing all the blood they can from their adversaries. The names of the neighborhoods from which the boys are from: “Rum Alley” and “Devil’s Row”, imply to the reader that the inhabitants are both heavily dependent on alcohol and rough in their personalities. The fact that young children are fighting battles like animals echoes the similar themes of Naturalists portraying the city as a jungle, and its’ inhabitants equal to the animals that occupy it.

Crane uses both similes and metaphors to add intensity and detail to his work. His work is peppered with colorful language that allows the reader to perceive an occurrence or characteristic with greater intensity. Crane implies that Maggie is a flower through stating that she “blossomed in a mud puddle” (ch. 5). When referring to the speed with which Maggie at her food, Crane states that she ate “like a small pursued tigress” (ch. 2). Later, Jimmie confronted Pete at the bar, and “snarled like a wild animal” when he threatened Pete into a fight (ch. 11).

Soon before the fight, Jimmie, his companion, and Pete stood close together and “bristled like three roosters” (ch. 11). From these similes and metaphors can be pulled Crane’s portrayal of the city. The use of animal comparisons to refer to the actions of people expose the animal-like and barbaric nature of those described. Crane and other Naturalists used this technique of describing the city as a jungle to present to their readers the reality of city life. The lifestyle and living conditions of the poor were animal-like. They fought one another in a struggle to survive.

Whoever was larger was always considered superior over the small. When Pete approaches the brawling children and hits one on the head to stop him from fighting, the young boy “scrambled to his feet, and perceiving, evidently, the size of his assailant, ran quickly off, shouting alarms” (ch. 1). Crane’s use of diction is also telling of the lifestyle of those living in the Bowery. The characters speech is consistently made up of curses and broken words. It shows that the inhabitants are either poorly educated or uneducated, and lack a civilized lifestyle.

The male inhabitants, at least in this story, are constantly challenging another to a fight if he feels insulted by something the other does or says. These traits further demonstrate the uncivilized and animal-like existence of those living there. Crane’s use of characterization helps the reader form ideas or hypotheses about the way a character will act throughout the story. In Chapter One, as Pete is approaching the brawl on the street, he is given the following description: Down the avenue came boastfully sauntering a lad of sixteen years, although the chronic sneer of an ideal manhood already sat upon his lips.

His hat was tipped with an air of challenge over his eye. Between his teeth, a cigar stump was tilted at the angle of defiance. He walked with a certain swing of the shoulders which appalled the timid. He glanced over into the vacant lot in which the little raving boys from Devil’s Row seethed about the shrieking and tearful child from Rum Alley. “Gee! ” he murmured with interest. “A scrap. Gee! ” He strode over to the cursing circle, swinging his shoulders in a manner which denoted that he held victory in his fists.

He approached at the back of one of the most deeply engaged of the Devil’s Row children. Ah, what deh hell,” he said, and smote the deeply-engaged one on the back of the head. This description of Pete portrays him as a person with a lot of confidence and one that sees himself as having authority over others and can do what he would like. “Maggie” is a story that is pessimistic. It is not only a story of a character who ultimately succumbs to her situation by becoming a prostitute because she feels she has no other way if supporting herself, but also one of the horrible conditions of the lower class. The residents of the area are “stuck” in the same situation of those who before them and cannot change.

This is especially seen in Jimmie, because when he gets older, he adopts the same traits his father had. The story also is detached. Crane is merely telling the story. He does not intrude upon the writing by stating that anything was right or wrong. In every situation that could render an opinion or analysis by the author, Crane does not interject with his ideas or thoughts about what is happening: he merely tells the story as it happened with no feeling toward it. He states something as it is and does not embellish it.

When Tommie dies, it is stated exactly as it is: “The babe, Tommie, died” (ch. ). No sad reminisces about his life or the “tragedy” of his death is given. He does not judge the characters. Naturalist writers often gave very detailed accounts of situations in their stories, but left judgment and interpretation to the reader. Tied to the fates of the characters is the story’s theme of “survival of the fittest”. The baby, Tommie, dies because he is too weak to survive. The same is the case for Maggie: she is dependent upon Pete for support. When she no longer has a relationship with him, she succumbs to her lowly situation and dies before her mother and Jimmie.

Jimmie and his mother survive because they have the toughness to endure the rough lifestyle that living in the city requires. Violence and aggression are persistent themes throughout “Maggie. ” The novella opens with a violent fight scene. When Jimmie returns home from the fight, his mother is furious and angrily scrubs him raw while washing the blood from the fight off of him. Pete, when breaking up the fight that Jimmie was in, just hits one of the kids on the head instead of speaking. Jimmie fights Pete when he discovers he has ruined his sister.

While Pete leads Maggie through a crowded sidewalk, he threatens to fight some who are in their way. This aggression is another way that Crane implies to the reader that the city is a jungle and those who reside in it are animals. A final similar theme of “Maggie” and other works written in the time of Naturalism is the use of irony. The first instance of it occurs after Jimmie tells his mother Maggie had “gone to the devil,” which is a phrase the novella uses for having premarital sex. She curses Maggie for a bit, the says “”Ah, who would t’ink such a bad girl could grow up in our fambly” (ch. 0).

This is a statement of great irony, because the environment Maggie grew up in was horrible, and her family was by no means a good one. A second instance of this occurs when Jimmie comes home to report “Mag’s dead” (ch. 19). His alcoholic and abusive mother wildly mourns the death of her daughter. A group of mourners arrive at the apartment, and one of the women tells her “”Yeh’ll fergive her, Mary! Yeh’ll fergive yer bad, bad, chil’! Her life was a curse an’ her days were black an’ yeh’ll fergive yer bad girl? She’s gone where her sins will be judged”” (ch. 19).

She responds by stating she would. This again reflects irony by the fact that, in the household she grew up in it was hard not to commit a sin. (Word Count: 1617) Crane’s novella reflects themes and techniques commonly used in Naturalistic writings. The writers whose works were considered from the era of Naturalism all had common themes and tenets that characterized their stories. Through the use of these literary devices the authors were able to paint a picture of the lives of the members of the lowest class and bring their readers to realize the reality of the world in which they lived.

Naturalism in Stephen Crane's Maggie: A Girl of the Streets. (2016, Dec 26). Retrieved from http://studymoose.com/naturalism-in-stephen-cranes-maggie-a-girl-of-the-streets-essay 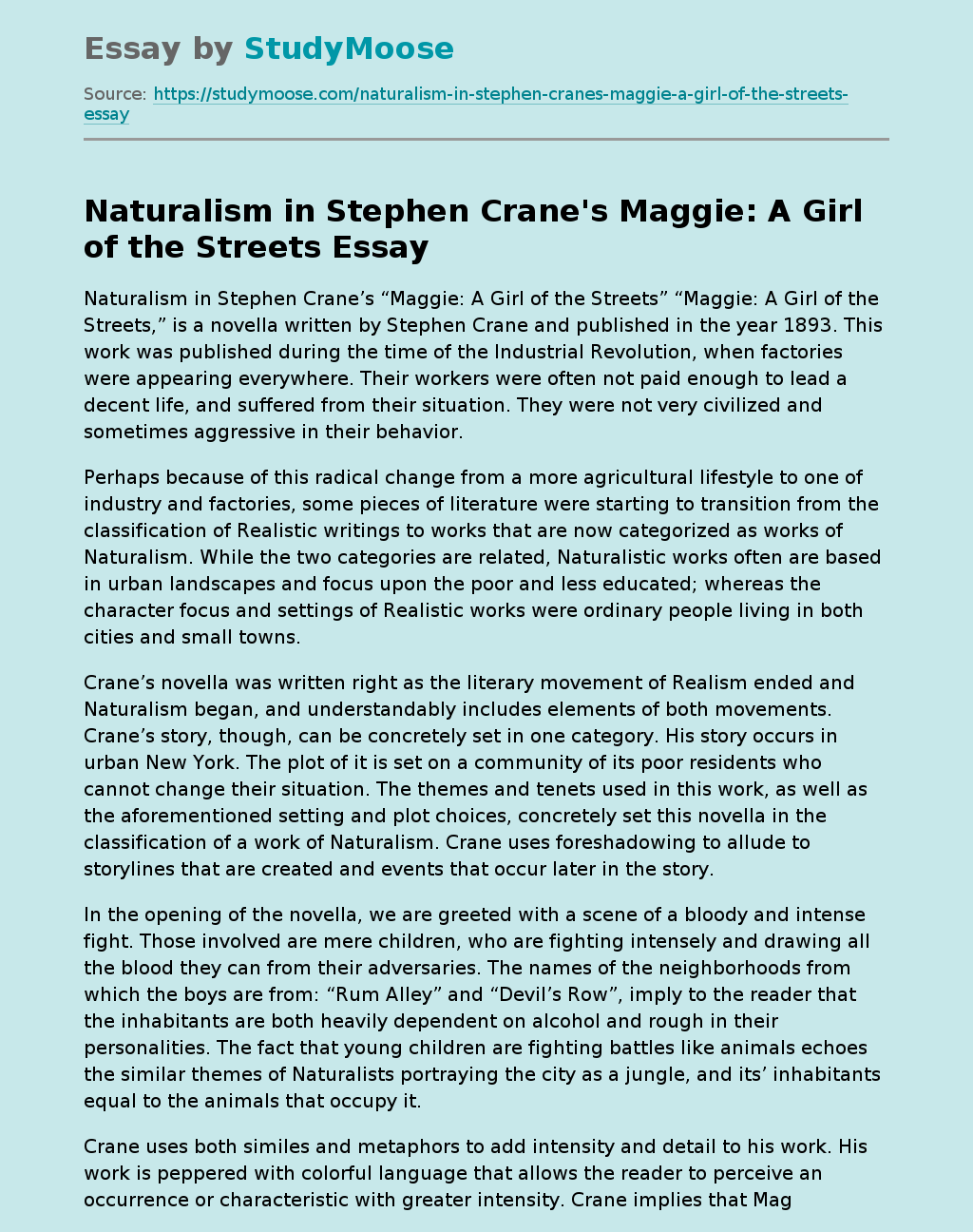