Existentialism vs. Naturalism in Native Son

When I was recently suffering from the dreaded sweet tooth syndrome, I hadn’t the slightest clue that the result would lead to a personal and universal philosophical debate worthy of comparison to Richard Wright’s Native Son. I found a bag of Dove milk chocolates in my cupboard, and proceeded to snack mindlessly. If you have ever had a Dove chocolate bar, you may know that the foil wrappers include adorable anecdotes, encouraging you to “take a well-deserved bubble bath”, or reminding you that “when two hearts race, both win”.

Don't use plagiarized sources. Get your custom essay on
“ Existentialism vs. Naturalism in Native Son ”
Get custom paper
NEW! smart matching with writer

After merely two chocolates (I swear), I came across a wrapper that I found somewhat hysterical in nature.

“Follow your instincts,” it beckoned, and I wanted to laugh out loud. What did this even mean? I began to think about the novel I was reading, Native Son. The main character, Bigger Thomas, was somewhat of a slave to his instincts. But were they even his? And thus, my own curiosity over existentialism and naturalism began.

Though Richard Wright’s Native Son encompasses several traditional values of existentialism, the style and themes presented are primarily a reflection of the naturalistic movement in philosophy and literature.

The philosophical studies of human beings, existentialism and naturalism, share a vital amount of similarities. But the distinctions between the two must be emphasized in order to better comprehend which style Richard Wright employed. Upon dissecting the style, themes, plot, and characters in Native Son, it is clear that naturalism was the predominant philosophical approach. Existentialism has been defined as a philosophical movement or tendency, accentuating individual existence, freedom and choice.

The existentialists conclude that human choice is subjective, because individuals finally must make their own choices without help from such external standards as laws, ethical rules, or traditions. Life’s events are not predetermined, but rather are a series of moments. “Human existence, then, cannot be thought through categories appropriate to things: substance, event, process. There is something of an internal distinction in existence that undermines such attempts, a distinction that existential philosophers try to capture in the categories of ‘facticity’ and ‘transcendence.

’ To be is to co-ordinate these opposed moments in some way, and who I am, my essence, is nothing but my manner of co-ordinating them,” according to “Existentialism as Philosophy”. Because individuals make their own choices, they are free, but because they freely choose, they are completely responsible for their choices. The existentialists emphasize that freedom is necessarily accompanied by responsibility. Furthermore, since individuals are forced to choose for themselves, they have their freedom—and therefore their responsibility —thrust upon them.

They are “condemned to be free. ” “The term naturalism describes a type of literature that attempts to apply scientific principles of objectivity and detachment to its study of human beings,” says Donna M. Campbell in “Naturalism in American Literature”. Naturalism is more of a philosophical study than literary technique. Naturalistic writers regard human behavior as controlled by instinct, emotion, or social and economic conditions, and reject free will, adopting instead, in large measure, the biological determinism of Charles Darwin and the economic determinism of Karl Marx.

Naturalism in literature is, in essence, an approach that proceeds from an analysis of reality in terms of natural forces like heredity, environment, and physical drives. Naturalism has its roots in the renaissance, its backgrounds in the Middle Ages. Authors in the Naturalist movement tended to deal with the harsh aspects of life. The subject matter in naturalist works differs from realism in that it often deals with those raw and unpleasant experiences which reduce characters to shameful behavior in their struggle to survive. These characters are mostly from the lower middle or the lower classes.

They are poor, uneducated, and unsophisticated. Naturalism and Existentialism have several similarities. Both philosophical means of studying human nature “belongs to intellectual history”. They strive to bring a strong sense of objectivity and “coldness” to their studies. They are based upon reasoning and logic, and want to see human beings scientifically. The key difference between naturalism and existentialism is the exercise of free will, and the individual’s ability to find meaning in their life. Naturalist perspective argues that humans cannot dictate their own lives.

Their belief is that an individual’s life is determined by its environment, heredity, circumstances, and so forth, whereas existentialists are based upon the concept of the individual acting out of free will. The purpose of life is to reject outside authorities or impacts on one’s life. Therefore the essential question referring to Native Son is; does Bigger take control of his own life, or is his life established by his surrounding circumstances? The plot of Native Son contains examples of both existentialism (arguably) and naturalism. Primary models of existentialism would be the Bigger’s murders of Mary Dalton and Bessie.

His reaction is not one of regret, but one of euphoria; “He had done this. He had brought all this about. In all of his life these two murders were the most meaningful things that had ever happened to him. ” Bigger’s possibilities have always been stunted by racism, but after these murderous acts, he is “free” to act (and to live with the consequences of these actions) for the first time. Even though these consequences ultimately mean flight and imprisonment, this feeling of self-assertion and personal control nonetheless remains liberating and intoxicating for Bigger.

This action brought Bigger “outside his family now, over and beyond them”. Other important existentialist passages surround the mother figures in Bigger’s life. The first is his mother, who sings a spiritual song early in the story. Bigger becomes annoyed with this, showing his need to move past religious authority to find his own meaning. The rejection of religion is a very common feature of existentialism, particularly for philosophers such as Sartre and Nietzche. Nietzsche proclaimed “Gods too decompose. God is dead. God remains dead. And we have killed him.

” Sartre elaborates on this bold statement by saying that “nothing will be changed if God does not exist; we shall rediscover the same norms of honesty, progress and humanity, and we shall have disposed of God as an out-of-date hypothesis which will die away quietly of itself. ” The second instance is Mrs. Dalton, who he somewhat compares to his mother. In their conversation in the Daltons’ kitchen, Bigger notices that Mrs. Dalton seems to want him to do “the things she felt that he should have wanted to do,” rather than the things his mother imposes upon him.

Despite his dislike towards Mrs. Dalton, she gets Bigger to start thinking about his own desires, and how he wants to live. Naturalism, on the other hand, makes up quite a majority of the book. Bigger, whom the focus revolves around, is a naturalist character. He fits all of the technical traits of a naturalistic “hero”; they are “Frequently but not invariably ill-educated or lower-class characters whose lives are governed by the forces of heredity, instinct, and passion. ” Even Bigger’s actions that give him a sense of meaning by going against the norm are cases of him following instincts.

And his instincts are based off of passions that are determined by his environment and past. For example, Bigger often feels enraged, ashamed, and fearful. All of these emotions come as a result of him feeling as though he is overstepping a social boundary, or he thinks he is being mocked for his race or social status. “The moment a situation became so that it excited something in him, he rebelled. That was the way he lived; he passed his days trying to defeat or gratify powerful impulses in a world he feared.

” When he stifled these feelings, he was playing into his surroundings, and when he acted upon them, he was a product of his environment. The primary tone and style in which the novel was written reflects naturalist ideals. While reading Native Son, I felt an eerie detachment from the story and the characters. It is not entirely cold, but the style effectively forces the reader to realize that this is a unique type of hero. Through a methodical examination of the human nature of the story, it accomplishes a naturalistic way of making the reader come to this conclusion.

“Today Bigger Thomas and that mob are strangers, yet they hate. They hate because they fear, and they fear because they feel that the deepest feelings of their lives are being assaulted and outraged. And they do not know why; they are powerless pawns in a blind play of social forces. ” This examination of human beings displays a very scientific approach to cause-and-effect instances in human nature, as well as the inability to exercise free will over circumstances. In Wright’s essay, “How Bigger was Born”, he discusses Bigger as chiefly a combination of many real relationships and political metaphors.

“Bigger’s relationship with white America, both North and South,…I had to depict,…I had to make known once again, alas; a relationship whose effects are carried by every Negro, like scars, somewhere in his body and mind. ” Because Native Son is Bigger’s story, and Bigger is a naturalist human being, the novel is naturalistic as well. Any example of existentialism can be argued as yet another result of Bigger’s lifelong struggles. The “instincts” Bigger followed, whether or not dictated by a chocolate wrapper, were essentially naturalistic.

Existentialism vs. Naturalism in Native Son. (2021, Nov 09). Retrieved from http://studymoose.com/existentialism-vs-naturalism-in-native-son-essay 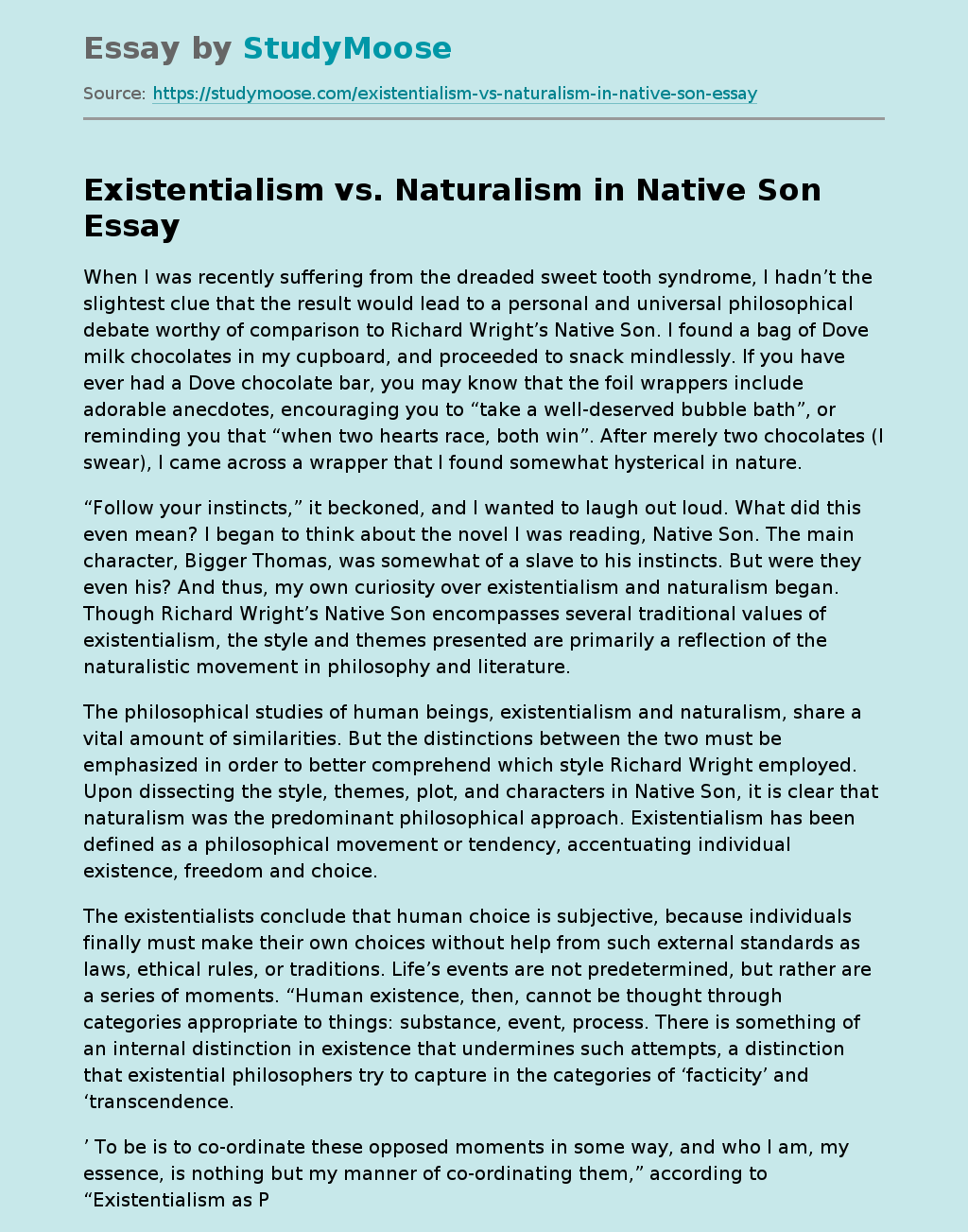