Notes of a Native Son Summary

James Baldwin uses a lot of ethos in his essay to show his position as a black man encountering the hardships during his era. Despite being a generation of now free men, Baldwin tells his everyday situation and responses he received that show that he was not close at all to being free in the society. It is with this story we get to see his idea of fighting the injustice begin to bloom, and led him to become a well-known writer exploring the social issues in the mid-20th American era.

Don't use plagiarized sources. Get your custom essay on
“ Notes of a Native Son Book Review ”
Get custom paper
NEW! smart matching with writer

Baldwin made it clear that before he developed a certain hatred towards the whites, he never felt that there was a difference between his white friends and his black friends and everyone was treated the same. This is still a situation we see today where children would play with other children regardless of their background but as they grew up, society puts the stereotypes in their heads and saw the world differently, in which Baldwin would grow up to see the world different as well.

If there is a revolving theme around this story, it is the theme of birth. In the beginning, there was a physical birth of James Baldwin’s sibling, moments after his father died. This could metaphorically translate as his father’s legacy being carried down through another child.

The ending was a birth of an idea, of how his father’s death and all the experiences Baldwin had encountered translated into an idea of fighting the injustice he was receiving.

One word that stood out to me in the passage was perdition. Baldwin’s father claims that Baldwin’s naïve perspective of the whites was going to send him to perdition. Perdition has an extremely strong meaning, and in the Christian context, it is used to describe people who chose to turn away from God and thus cannot be saved nor forgiven, in a way being sent to the eternal pits of hell. Baldwin’s father is sending out a warning of what is yet to come for Baldwin, who would see how his view about the world will be changed forever by his life in New Jersey and that one American Diner situation. Baldwin would see the world the same way his father had seen, with the same bitterness his father carried till his death. Baldwin said that he had contracted a blind fever, which I believe that the blind fever was a metaphorical way of describing the emotional build-up of the treatment he received as a black man.

Notes of a Native Son Book Review. (2016, May 07). Retrieved from https://studymoose.com/notes-of-a-native-son-book-review-essay 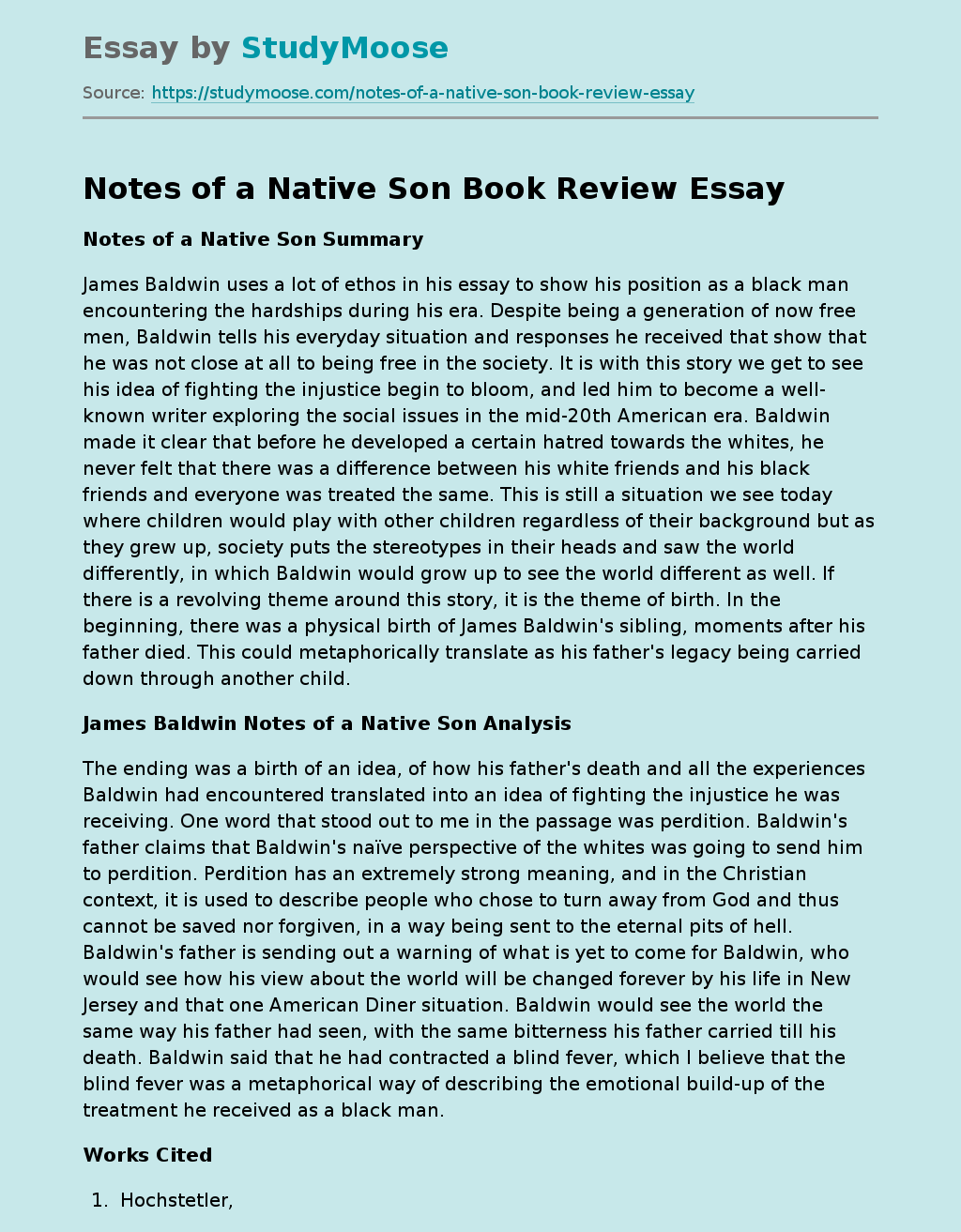