How does Baldwin's real-life experience connect to his short story, "Sonny's Blues"?

The writer was a poor boy growing up. He was also a Negro, so things were bad for him and his family in white America. He probably felt sad every day of his childhood so he turned to books for entertainment and maybe escape. When he started reading, he found that he liked it and wanted to create stories for other people to enjoy, but he was a poor Negro boy who could not expect help from the whites, so he taught himself to write.

Don't use plagiarized sources. Get your custom essay on
“ How does Baldwin’s real-life experience connect to his short story, “Sonny’s Blues”? ”
Get custom paper
NEW! smart matching with writer

That is similar to Sonny, who taught himself to play the piano. In the final scene, Sonny performs some improvisational jazz.

What is improvisational music? What do we learn about Sonny through his performance? Explain. Improvisational music is when the band members just start playing tunes that come out of their heads. These are tunes they have never played or seen before. There is no music for them to read or write down; they just play from their heart.

When Sonny starts, it seems like he is unconfident. He does not believe in himself very much until he gets into his rhythm and then he really gets down. It’s like he finally sees that people are going to accept him and not make fun of him.

Professor Henderson observes that Baldwin adds depth and meaning to “Sonny’s Blues” through the effective use of symbolism. Identify words or passages that demonstrate Baldwin’s use of symbolism, such as of light and darkness, past and present, etc.

When the big brother says that he felt a big block of ice in his stomach that would not go away, it was Baldwin’s way of describing how the character had a very bad feeling about what happened to Sonny. Then the author writes that boys grow up fast but they can’t get their full potential because they bumped their heads on the roof of their possibilities.

Baldwin means that Negroes could not ever hope to achieve what the white people did in life, that there was a ceiling (limit) for them that was lower than the one for white people. “All they really knew were two darknesses,” Baldwin writes, talking about the dark movie theaters that Negro boys would go to, and also their drab, unhappy lives that were full of darkness. Here he means darkness is sadness, depression and lack of a way out. When the boys are in the movies, they can pretend to be somebody else, and no one can look at them in a bad way. Much of Baldwin’s short story is connected to emotions and feelings expressed in jazz music.

Research jazz music. Is it important to understand jazz or know its history to understand its significance and meaning in the Baldwin’s story? Why or why not? Jazz is really old music, like from more than 100 years ago. It started up because the Negro people got tired of the same old sad songs, the blues. They wanted something with a faster beat; something that would make them part, but jazz is kind of depressing if you really listen to it closely. You might have a party at your house or go to a bar, but your house and the bar are still in a very poor part of town, and at the end of the night, you still do not have very much.

The music made people have some fun, but there was a tone of sadness under all the music. I think it is important to understand where jazz came from in order to understand this story better. Jazz music is like this. Imagine you have a bird in a little cage where he can’t fly or move around much. He must be very sad. Then you put him in a cage that is a little bit bigger, so that maybe he can hop from one bar to the next. The bird enjoys the hopping, but he still knows he is a prisoner. Compare and contrast the characters of the two brothers in “Sonny’s Blues. ” What sort of person is the narrator?

How does he feel about his brother? What do we know about Sonny and his feelings for his brother? Explain. The older brother is a good boy. He does his job, pays his bills and keeps his nose clean. He went into the Army because that was all a Negro man could do in the old days. When he got out after the war, he went to university to become a teacher. Back then, there probably weren’t too many white teachers in black schools, so the big brother might have had an easier time finding work as a teacher in a school for blacks than as a lawyer or a doctor. His little brother Sonny is always getting in trouble.

He doesn’t go to school, he uses drugs, and he doesn’t do what he is told to do. That is because he does not like life, because the white people are so unfair. After a while and a lot of suffering, Sonny discovers something he is good at. He learns to play the piano, and he is able to do something creative and positive, be successful and have the people’s respect. Write an essay exploring the motivation behind Baldwin’s choice of narrator for “Sonny’s Blues. ” Why do you think he chose the older brother to narrate the story? How would the story be different if narrated from the perspective of the younger brother? Mr.

Baldwin made the older brother the narrator so the reader would not feel like Sonny was a dangerous man. The older brother seemed to apologize for Sonny while at the same time try to convince himself and the reader that Sonny really was not a bad guy. Sonny is really a hero and yet an anti-hero. He is someone that seems dangerous, lazy and extreme until you get to know him. The problem is that Sonny does not let people know him. If Baldwin made Sonny the narrator, then the story would be angry and rebellious. Sonny’s inner fears and thoughts would have come out, and readers would have thought he was just a delinquent with no value or future.

If the book was written today then maybe it would be different, but 50 years ago, people did not want to read about an angry black man. The ending would have also been more difficult, because how could Baldwin write about Sonny’s triumph if Sonny is the one talking about it? People would have thought Sonny was conceited. In what ways does “Sonny’s Blues” tell a universal story? What is the theme of the story? In what ways is this theme emblematic of the times and in what ways does it transcend time and place for a more universal message?

This is a story about a bad boy that cut himself off from his family and went where no one wanted to follow him. He got in trouble and went to jail. He was a lost boy, and it looked like there was no hope for him. Only one person did not give up on him totally, and that was the older brother. Though he worried about Sonny and sometimes was tempted to give up, he never really did. So this is like a story about someone who has a big problem in life and everyone thinks that there is nothing he can do to improve his situation. This story reminds me of the movie “Awakenings” with Robin Williams and Robert DeNiro.

In that movie, DeNiro has a disease and he cannot talk or move or do anything. People think his life is over, but the doctor refuses to give up. He finds a special medicine and DeNiro comes to life for a while. In the end, DeNiro falls back into his catatonic state, but there is hope there. We learn that DeNiro is not a bad person but someone full of life and feeling and desire, and we hope that the doctor can find a new medicine to make DeNiro whole again. Explore the theme of “wisdom through suffering” in Baldwin’s short story “Sonny’s Blues. ” My grandmother always used to say that a little suffering was good for the soul.

Now I understand her better. The brothers have had more than just a little suffering in their lives. They are practical and realistic; they know that the white people of the establishment are not going to help them or give them a fair chance, so they understand they must do everything for themselves. They do not keep any illusions about a magical solution to their problems. As time goes by, the characters mature and realize they can be okay without all the things that white people enjoy. They learn to live with their situation, enjoy the good things they have and accept the things they cannot change. That is wisdom.

How does Baldwin's real-life experience connect to his short story, "Sonny's Blues"?. (2020, Jun 01). Retrieved from http://studymoose.com/baldwins-real-life-experience-connect-short-story-sonnys-blues-new-essay 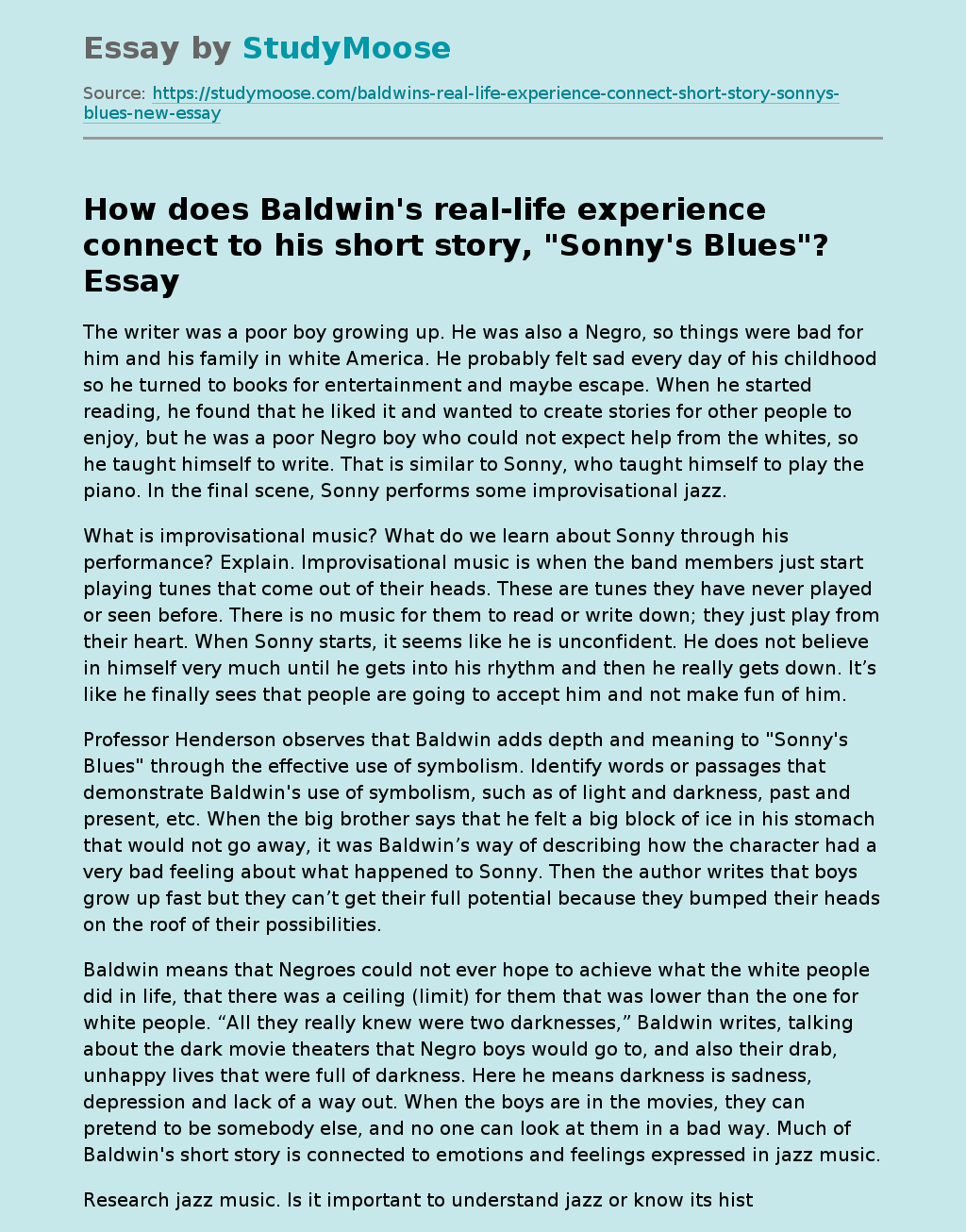