In James Baldwin’s short story “Sonny’s Blues” a young man questions his brotherly obligations after finding that his younger brother has been arrested for using drugs. In the attempt to rectify his younger brother’s behavior and life, the young man faces his own feelings for his brother and comes to terms with the life his brother Sonny lives. The developments of certain elements-plot, character, point of view, setting, symbolism-in the story help accentuate the narrator’s struggles and theme(s) of the story.

Don't use plagiarized sources. Get your custom essay on
“ Sonny’s Blues by James Baldwin ”
Get custom paper
NEW! smart matching with writer

One of the most important elements of this story is the setting.

Taking place in the drug-plagued, poverty-stricken, and frustrated streets of Harlem in the 1950s, the setting aids any reader in understanding the obstacles and hardships the narrator and his brother faced growing up in Harlem. From the narrator’s description of the setting, we can infer that the violence, drug abuse, and indigence in the narrator’s community, Harlem, has had a deep emotional impact on him and his brother.

Proficient in: Discovering Oneself

Furthermore the setting can also be argued to have somewhat attributed to Sonny’s difficulties.

The point-of-view also plays a pivotal role in providing an insight into the lives of the narrator and Sonny and the environment in which they were raised. The story is told in first person by Sonny’s brother, an unnamed narrator. Although the story’s title might invoke the sense that Sonny is main character, making the narrator a subordinate character, the story is as much about the narrator as it is about Sonny.

Through the narrator’s perspective, we see the torn city of Harlem and the hurdles that Sonny has faced and will face.

The narrator is more aware of Harlem’s dangerous and violent side. In numerous instances, he describes the poverty and crime that are rampant in the community. More importantly, the narrator’s point-of-view enhances the emphasis on the relationship between him and his brother. Furthermore, the narrator is an excellent narrator because he is able to give us a reliable glimpse into to Sonny’s life and his own. The development of the plot stands out as one of the most crucial elements of the story. From the very beginning, the narrator discovers that Sonny has been arrested for his drug use. This action engenders the narrator to reflect on his relationship with Sonny. The discovery of Sonny’s arrest quickly conveys to us a point that is so central to the story. Following the introduction of plot is the conflict. The conflict of the story centers around the narrator and Sonny arguing about Sonny’s decision to become a jazz musician. This conflict,however, has happened before the situation in the introduction of the story but is mentioned further in the story. Sonny’s desire to become a jazz player is seen as a waste of time by the narrator.

Consequently, tension is formed between the brothers because of their lack of agreement on the issue. The tension between the brothers gets even more complicated when Sonny moves into the narrator’s apartment. During this part of the story, the narrator and Sonny try to come to terms with themselves and each other. The climax of the story is when the narrator and Sonny argue in the apartment. This is the most important part of the story because both brothers have a brutally honest argument. The narrator discusses Sonny’s drug use, his misunderstanding of Sonny as a musician, and Sonny’s frustration in life.

This argument between the two brothers resolves when Sonny invites the narrator to come hear him play. The story concludes as the narrator sends Sonny a drink. The narrator finally understands how important music is to Sonny. The story leaves the readers with the impression that both brothers may finally find peace with each other. Another critical part of the story is the symbolism. Baldwin’s use of the light and darkness as two forces that are constantly clashing with each other is very symbolic in what it conveys.

” This very cup highlights the troubles and uncertainty Sonny currently has in his life. It symbolizes Sonny’s effort to redeem himself of the suffering he has caused and endured. Given its unique structure, “Sonny’s Blues stands out as one of Baldwin’s most critically-acclaimed works. Collectively, the elements of the story paint a picture of the atmosphere during one of Harlem’s renown periods. In conclusion, these elements of “Sonny’s Blues” enhance the story’s meaning and shed light on the difficulties Sonny and his brother faced. 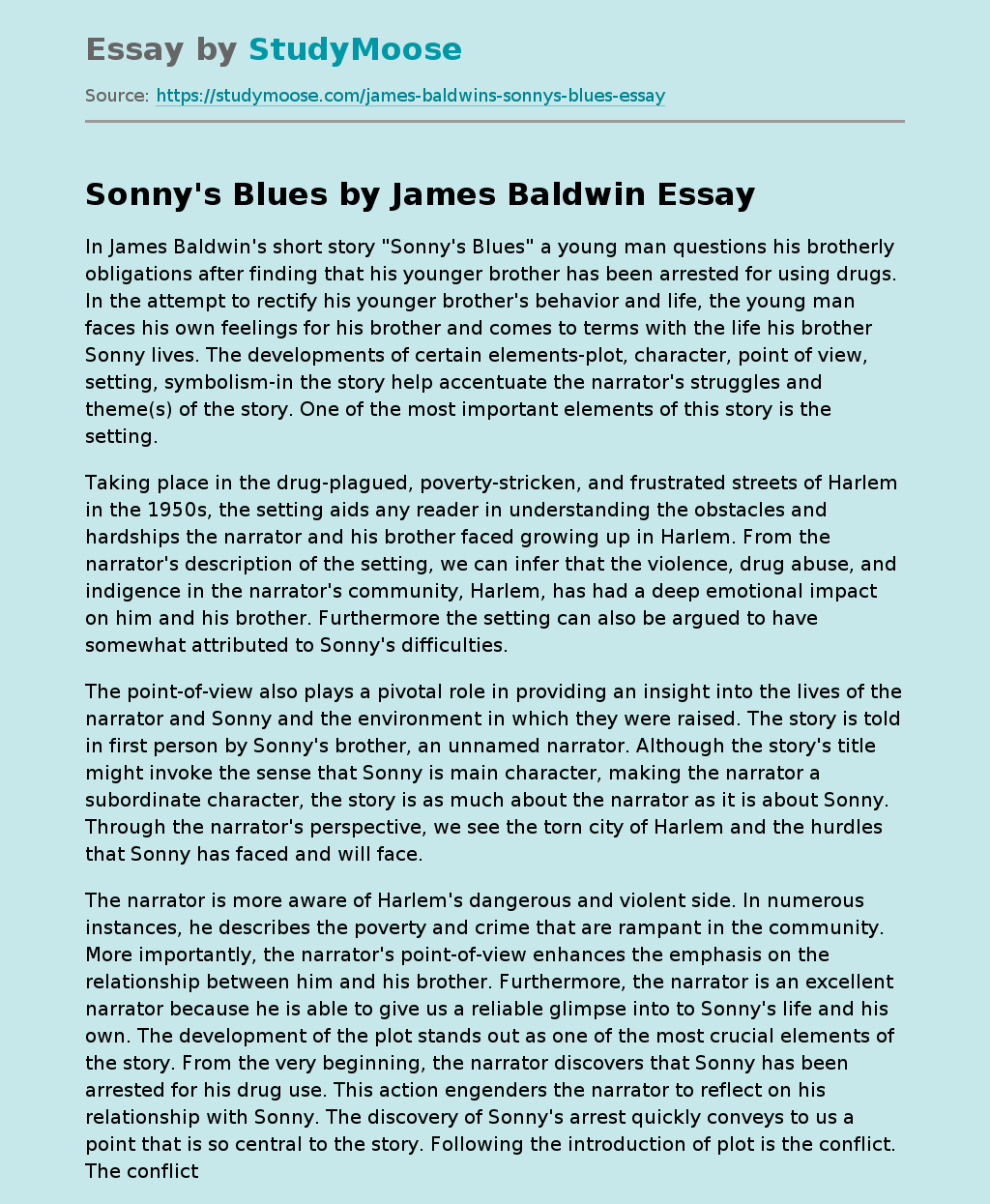