"The Rockpile" by Jessica Ruelle

“The Rockpile” was written by James Baldwin, a black American writer of the 20th century. This short story takes place in a street of Harlem around the 1930’s. James Baldwin shows us, through the life of a black family, the conflicts that can appear in human relationships, but also the presence of temptation and sin. This essay will analyse the themes that are mentioned above, but also how, by some particular literary style effect, the writer plunges his readers in his own world.

Turn in your highest-quality paper
Get a qualified writer to help you with
“ “The Rockpile” by Jessica Ruelle ”
Get high-quality paper
NEW! AI matching with writers

One of the main themes is family relationships. We are in a Protestant family in which the father does not seem to be very often at home. But he still has a predominance in his family’s life. John seems to be really scared of him, more than Roy. This is probably due to the fact that Gabriel does not love John as much as he loves Roy, because John is not his son. Gabriel knows what is wrong and what is right, because he represents God, he is a Reverend.

Therefore, he should be a good father, but he beats John and Elizabeth. In fact, it seems obvious that they are in danger from the moment Gabriel is back home. “John stood just before him; it seemed to her astonished vision just below him, beneath his fist, his heavy shoe. The child stared at the man in fascination and terror” (p.15).

John stands before Gabriel as if he was before God, the one who punishes you for your sins.

Elizabeth uses Delilah as a shield twice: the first time when she comes down to tell Gabriel what happened, and the second time after she has told him what she thought about him. Another point is that both of the parents overreact to what happened to Roy. They react as if he was going to die when he just has a superficial scar. The children have got not enough freedom. The only freedom they enjoy is to sit on the fire escape when they father is not at home; if he was home, they would not have any freedom at all. To summarize, this family is characterized by the presence of a wicked father, but also by excessive reactions, and finally by the lack of freedom of the children.

Another main theme is the one of temptation and sin. Roy is tempted to go and play at the place where the rockpile stands, and this for different reasons. First of all, his mother told him not to go there. When you forbid children to do something, you can be sure they will do it, because they do not know why it is forbidden. Besides, the rockpile has something mysterious in itself, “it was a strange place to find a mass of natural rock jutting out of the ground”(p.9). Every child is fascinated by mysterious things. When Roy’s friend come beneath the fire escape to call him, Roy can’t resist and he leaves. This may symbolically replicates the structure of the very first sin commited by Adam and Eve in the Garden of Eden.

There is also a contrast between John and Roy’s family and the people outside: everybody outside seems to be a sinner, except the church-members: “…below them, men and women, and boys and girls, sinners all, loitered; …”(p.10). But there are sinners in their house too: Elizabeth was pregnant before she met Gabriel: “…her children and Gabriel’s: Roy, Delilah, Paul. Only John was nameless and a stranger, living unalterable testimony to his mother’s day in sin”(p.15). But nobody blames her. John, who is not a sinner, is blamed instead of Elizabeth and of Roy. He is like Jesus; he is sacrificed for the other’s sin. Temptation is present in the story and is represented by the rockpile. Besides, sin is everywhere, even in a Christian house.

James Baldwin uses black American language to plunge us in the reality of Harlem. His readers are literally transported in that street, in that house. He uses an omnipresent narrator, which means the narrator knows everything. Besides, we know from the beginning what is going to happen: the narrator warns us. James Baldwin really takes us by the hand and shows us his world, using his own language.

As a conclusion, this short story shows us how life could be in a Protestant family living in Harlem in the first part of the 20th century. Because of Roy’s fault, it shows the presence of sin in almost each character, and the cruelty of Gabriel not considering John as his own son. The literary style of James Baldwin reinforces the power if this meaningful text. The one who lets temptation enter in his life is weak, but we are nothing but human beings, are we not?

"The Rockpile" by Jessica Ruelle. (2016, Jul 16). Retrieved from http://studymoose.com/the-rockpile-by-jessica-ruelle-essay 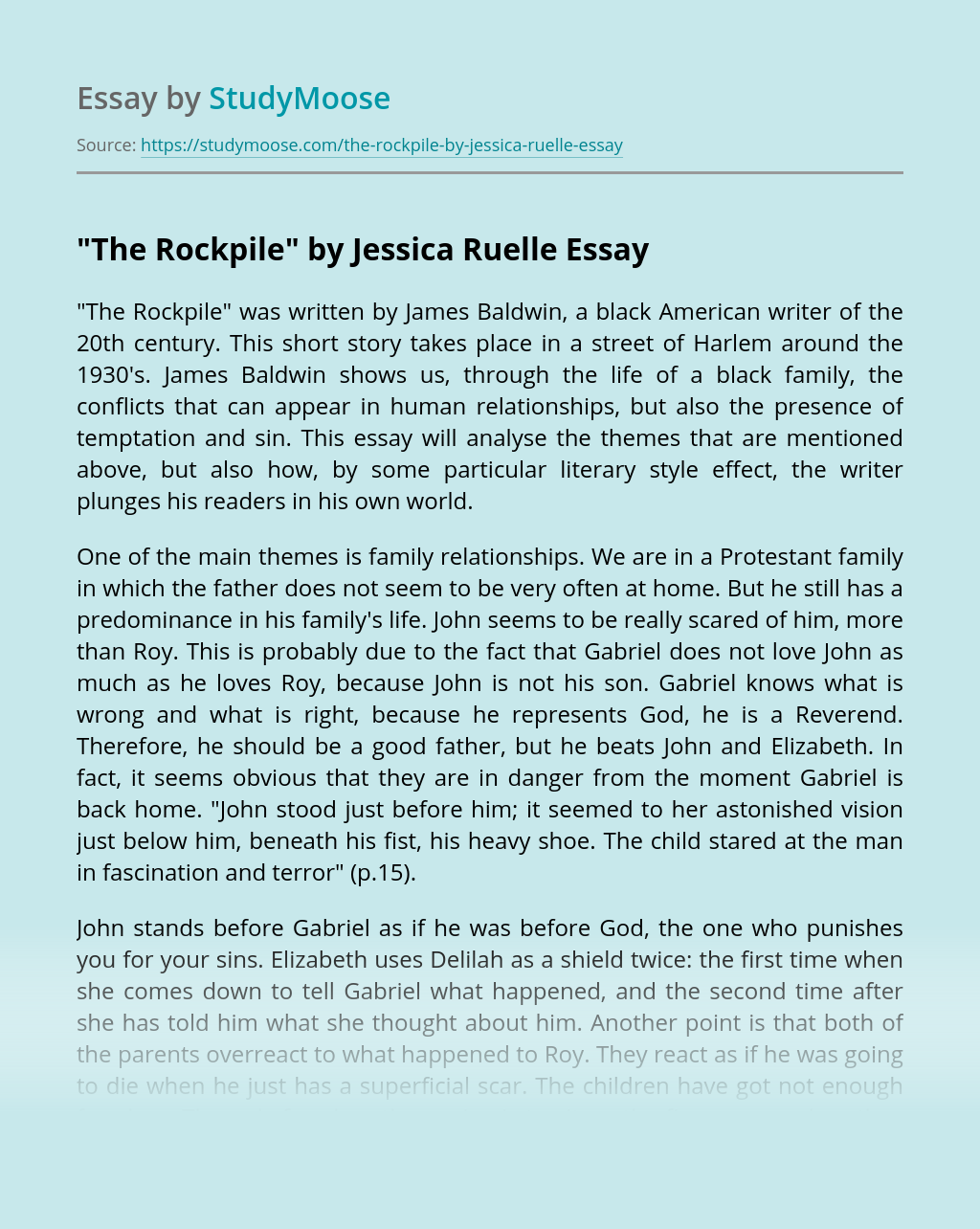 Turn in your highest-quality paper
Get a qualified writer to help you with
“ “The Rockpile” by Jessica Ruelle ”
Get high-quality paper
Helping students since 2015
Stay Safe, Stay Original