One of the most intriguing works by Irish writer James Joyce is “Araby” in which a young boy, who is the narrator, leads a carefree life in a Dublin neighborhood before falling in love with his friend’s sister. He is always watching her steps, every single morning. When they finally speak, the girl mentions the existence of an exotic bazaar in town, named “Araby”. The narrator then becomes obssessed with the idea of going to the bazaar to bring the girl a present.

Turn in your highest-quality paper
Get a qualified writer to help you with
“ Araby – James Joyce ”
Get high-quality paper
NEW! AI matching with writers

Nevertheless, disappointment is an important theme of the novel. The young boy is ultimately faced with reality when he goes to Araby and realizes that he cannot afford the things that are sold there. In others words, Joyce deals with the dichotomy of fantasy versus reality in “Araby”, giving it a rather pessimistic approach, where reality and its negativity prevail. In order to better comprehend Joyce’s “Araby”, it is important to understand the author’s biography and the time in history in which “Dubliners” was written.

Joyce was born in a poor family in February of 1884. His father had several jobs and his mother was a devout Catholic. A young Joyce eventually moved to Paris, where he worked as a teacher and journalist, and later, during World War I, he took refuge in Zurich, Switzerland. Since Joyce spent great part of his adult life outside of Ireland, “Dubliners” is written through the eyes of a “refugee”, as a member of Dublin’s society who is also an outsider.

Through “Dubliners” and its short stories, including “Araby”, Joyce describes life in Dublin, how religion influenced and dominated Irish society and how a national identity came to be. At that time, Ireland, a country that had suffered the horrors of the Great Famine in the past along with the death and emigration of millions of its people was now struggling culturally and politically to create its own identity and breakaway from British political control and cultural influence. The conflict between Catholics and Protestants was at its peak, as the entire island was under United Kingdom’s rule.

In other words, Ireland and its society were going through a turbulent period in history, which affected Joyce’s use of language in “Dubliners” as well as the themes cointained in his works, such as religion, the hardships of reality and Anglo-Irish relations. “Dubliners” is a unique compilation of stories because it follows a chronological pattern. “Araby” falls in the category of “childhood”, because its narrator is a young boy and also due to the fact that one of its central themes is growth and maturity.

In order for such growth to take place, “Araby” follows a clear sequence of events, which is described by William York Tindall in “A Reader’s Guide to James Joyce” as “illusion, disillusionment and coming to awareness” (19). These three elements that result in the character’s growth are well defined in the story. Mangan’s sister and the bazaar both represent illusion. Disillusionment is present when the narrator goes to “Araby” and realizes that it is not what he had expected.

Finally, disillusionment is shown in the end, when he comes to the conclusion that he is not able to buy Mangan’s sister a gift, which in turn, leads to the final moment of epiphany, a concept that will be further discussed. Another essential aspect to “Araby” is the presence of images and symbols throughout the story, in particular those with religious conotations. Since religion and the church played an important role in Irish society and Joyce was Irish himself, religious themes are abundant in some of Joyce’s works, “Araby” being one of them.

Religious imagery is present in the very beginning of the story, when the narrator mentions that the former tenant of the house where he lives was a priest. The house itself also contains religious symbol, in this case, in the garden: ” The wild garden behind the house contained a central apple-tree and a few struggling bushes under one of which I found the late tenant’s rusty bicycle-pump” (373). It is evident that the apple-tree in the story evokes images of the Adam and Eve passage in the Bible, where they were tempted to eat the “forbidden fruit” which was an apple.

Mangan’s sister, the “object” of the narrator’ affection, is perhaps the most significant religious symbol in the story. The narrator is devoted to her much like a religious person is devoted to God or a Saint. The connection between Mangan’s sister and religious worship is shown in the passage where the narrator goes marketing with his aunt, while passing through the crowded and disorganized streets: I imagined that I bore my chalice safely through the throng of foes.

Her [Mangan’s sister] name sprang to my lips at moments in strange prayers and praises which I myself did not understand My eyes were often full of tears (I could not tell why) and at times a flood from my heart seemed to pour itself out into my bosom (179). The narrator’s feelings to Mangan’s sister are so intense to the point of being compared to a religious experience. When he mentions Mangan’s sister name in “strange prayers” he is describing the powerful effect that she has on him, like the power of a prayer to a religious person.

To the narrator, her name in the strange prayers has the same force as the name of Jesus or Mary in a traditional Catholic prayer. Cleanth Brooks, Jr. and Robert Penn Warren reinforce the link between the narrator’s desire and religion in their work, titled “The Chalice Bearer” by affirming that “(… ) when he [the narrator] speaks of his confused adoration, we see that the love of the girls takes on, for him, something of the nature of a mystic, religious experience. The use of the very word confused hints of the fact that romantic love and religious love are mixed up in his mind” (95).

The narrator, thus, is yet to discover reality. He is still trapped in a world of illusion where the lines of pure, religious love and physical desire are somewhat blurred. The bazaar, called Araby, furthers the narrator into illusionment. The name of the bazaar evokes images of a far and exotic place: “The syllables of the word Araby were called to me through the silence in which my soul luxuriated and cast an Eastern enchantment over me” (375). It can be argued that the bazaar also represents a religious symbol in the story.

Such view is supported by William York Tindall: “The Church, after all, is a more or less Oriental foundation, and the ecclesiastical suggestion of Araby (“not some Freemason affair”) is supported by metaphor” (20). In other words, Araby can be regarded as a religious institution that takes over the life of the narrator. His anticipation of the visit to the bazaar becomes a focal point of his life, interfering with his everyday activities: “I answered few questions in class. I watched my master’s face pass from amiability to sternness… I could not call my wandering thoughts together” (375).

The story ends with dissapointment and frustration when the boy arrives at the bazaar and realizes that most mof the stalls are closed, and even if they were open, he would not be able to buy Mangan’s sister a gift. The narrator finally understands that life is harsh. In other words, “Araby” presents a moment of epiphany. Nevertheless, Joyce goes against the traditional concept of epiphany in “Araby. ” Epiphany is usually associated with enlightment and positive growth whereas in “Araby” epiphany is linked with negativity.

Such idea is supported by Florence L. Walzl in “A Companion to Joyces’ Studies. She argues that: ” His [the narrator] inability to buy even a trinket for the girl and his perception of the inanity of the flirtation he has just witnessed climax in an epiphanic vison, not of light, but of darkness” (175). With such statement, Walzl acknowledges that the pattern of “illusion, disillutionment and coming to awareness” in the story comes “full circle”. Instead of enlightment, the narrator’s epiphany causes him to become bitter: ” Gazing up into the darkness I saw myself as a creature driven and derided by vanity; and my eyes burned with anguish and anger” (377).

Since religious symbols are a constant presence in the story, it has been argued that the narrator’s disappointment is, in reality, disappointment with the Church and the values that it represents. This position is shared by Florence Walzl in her conclusion of her analysis: At the narrative level, “Araby” manifests disillusionment in young love; at a symbolic level, it represents disillusionment in the theological virtue of charity. Faith, hope and love are diminished in this first triad of tales of childhood (176). In conclusion, “Araby” is a story of a young love.

As such, it presents moments of illusion throughout most of the story. However, illusion is shattered by the narrator’s dark epiphany. A closer analysis of “Araby” reveals that there is more to the story than a young boy’s first love. The abundance of religious imagery shows the readers that the story is very much about criticism of the Church’s role in the lives of the Irish people and its effect on a nation that was struggling politically to be free from the United Kingdom’s influence and ideologically, with the animosity between Catholics and Protestants. 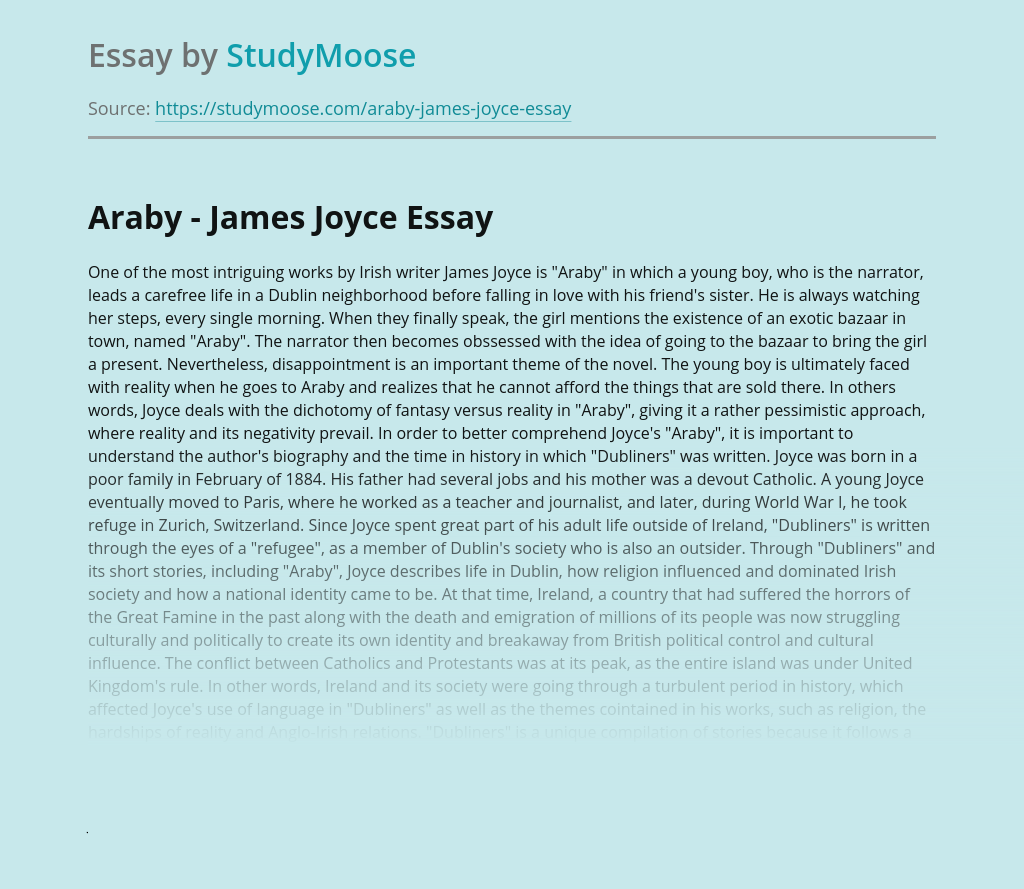 Turn in your highest-quality paper
Get a qualified writer to help you with
“ Araby – James Joyce ”
Get high-quality paper
Helping students since 2015
Stay Safe, Stay Original