Araby, by James Joyce is a story about a young boy experiencing his first feelings of attraction to the opposite sex, and the way he deals with it. The story’s young protagonist is unable to explain or justify his own actions because he has never dealt with these sort of feelings before, and feels as though someone or something totally out of the ordinary has taken him over. The boy can do nothing but act on his own impulses, and is blind to the reasoning behind him.

Araby is such a powerful study on childhood because of the way Joyce so vividly recounts the frustration a child feels when they are unsuccessful at trying to be an adult too fast. The story begins with images of blindness, a symbol of the boy’s youth and ignorance. Joyce describes the street the boy lives on, North Richmond street, as being “blind.” It is from these blind shadows of the boys ignorance that the object of his affection, his friend Mangan’s sister, emerges.

Joyce describes her figure as being “defined by the light of the half-open door” (Joyce, 27) a symbol of the boy becoming enlightened by these new, adult feelings.

As she enters the story, the images change from darkness to light and his feelings change from immature childhood concerns to those of an adolescent. Eventually, the boy’s language becomes more poetic and adult, and his thoughts turn completely to her. “Her image accompanied me even in places the most hostile to romance,” he admits “her name sprang to my lips at moments in strange prayers and praises which I myself did not understand.

The boy idealizes Mangan’s sister, obsessing over her, and is overcome with joy when she speaks to him. She tells him about a bazaar being held called Araby, and asks him if he is going. “I forgot whether I said yes or no” says the love-struck boy to the reader, he is overcome with a mixture of fear and excitement as she chats calmly with him, explaining she can’t go because she will be away on a retreat when the bazaar is being held. She does not have to say anything else, the boy has found his opportunity to gain her affections, he tells her he will go to the bazaar on her behalf and buy her a present. He can hardly contain his excitement at this chance he’s been given to prove to do something nice for her, and to do something mature and adult like traveling to a bazaar and picking out a present alone.

The boy takes this new responsibility, this new adventure to mean that he’s entered a new phase of life. Time suddenly seems to slow down in the story as the boy waits for Saturday to arrive. “I could not call my wandering thoughts together” he complains “I had hardly any practice with the serious work of life which, now that it stood between me and my desire seemed to me child’s play, ugly monotonous child’s play.” (Joyce, 29)

Everything getting in the way of his journey begins to torture the poor boy, he sits in agony as the clock ticks, as he waits to be allowed to leave, he can barely contain his frustration. This sort of anticipation shows to the reader that the boy is not as mature as he feels himself to be, if he were an adult making a journey for a girl he liked, the entire process would not seem so exigent. When his uncle finally arrives home he is distracted and has forgotten about the boy’s desire to go to the bazaar. He starts talking about an Arab poem he knows and keeps the boy even longer, finally giving him the money and allowing him to go.

The boy’s arrival at the bazaar, like his quick transition to adulthood, is a false awakening. By the time he arrives at the bazaar he can not purchase anything, the vendors are tired and closing up shop, and have little desire to see what this young boy can buy from them. He is being treated as a child and is aware of it. His quest for adulthood and independence seems somewhat futile, this trip didn’t assert anything. He feels the disappointment of seeing Mangan’s sister empty-handed pour over him.

As the boy leaves the bazaar the light goes out, once again returning to the symbols of light and darkness in the beginning. The boy is returning to ignorance and childhood. “Gazing up into the darkness I saw myself as a creature derided by vanity; and my eyes burned with anguish and anger” reflects the boy, finally realizing that the whole quest was frivolous, the girl was a fantasy. So, in this end paragraph, although the darkness is a return to childhood, he has gained some self-realization. His ability to recognize his youth and his ignorance is a growth. 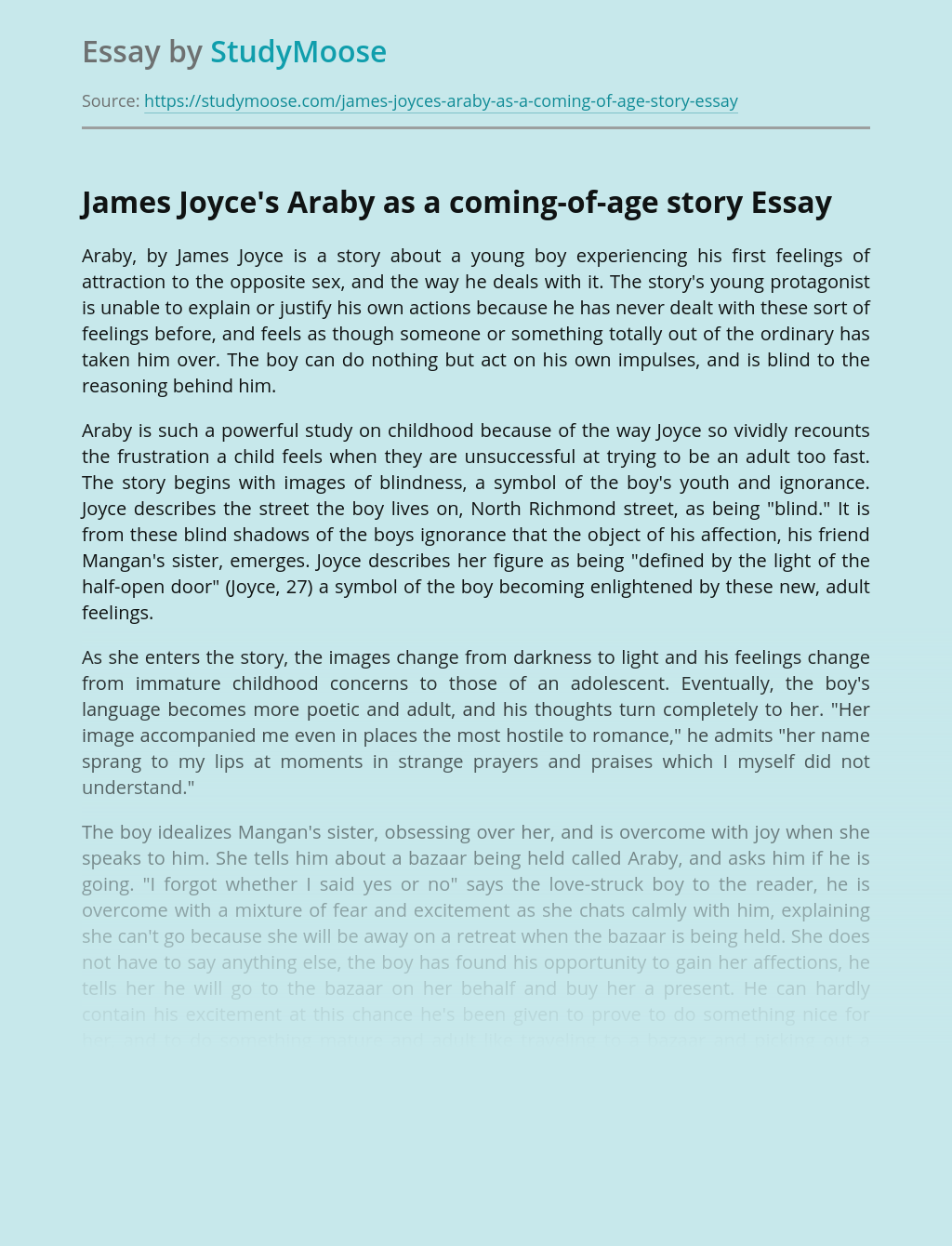