LeBron James uses specific strategies, especially Pathos, to achieve his purpose of explaining his decisions in the past years of his basketball career. His choice of language appeals to the emotions of his fans and basketball spectators as a whole as he attempts to win back the trust and respect of his hometown fans. He does this in paragraph one, for example, by emphasizing that Ohio is his home, and that it is always going to have a place in his heart and motivate him to succeed.

He uses repetition to get his point across when he states, “It’s where I walked. It’s where I ran. It’s where I cried. It’s where I bled.” This places an effect on his audience in which they accept James as one of their own, for it shows his special relationship with his city. It seems to, subtly, tell the story of an average boy growing up in a small town and instills the image into his audiences’ minds that Ohio raised him and that the people there are family.

LeBron assures his audience that he has matured and that he has finally realized that his “relationship with Northeast Ohio is bigger than basketball.” He speaks of his actions as a learning experience, and compares it to “college for other kids.” James uses ethos here to give credibility to his choices. This ensures his Cleveland fans that his past decisions were not disrespectful as they originally thought, but actually imperative to his growth as a basketball superstar.

In addition, James decides to solidify the fact that he loved what he did in Miami with his teammates on the Miami Heat, and that that is something he will cherish as he moves on to the next stages of his career. His diction, which includes, “We are brothers for life” shows the respect he has acquired for his team in Miami. This shows his sincerity in his approach to the situation.

Also, James decides to mention his family. He specifically mentions that when his agency ended in Miami, he would not go anywhere but Cleveland in order to be able to raise his family in his hometown. Once again, James achieves his goal of gaining the trust of his fans by stressing that Ohio is his home. He specifically includes his family to prove his loyalty to Cleveland fans and Ohio as his home state. James uses repetition again towards the end of his essay when he says his calling to Cleveland “goes above basketball.” He wants not only to reaffirm his commitment to the team and fans, but to the city as a whole. He discusses his care for the community and his responsibility in making Ohio a great place to grow up. The concluding paragraph brings all of his points together when it states that James is “ready to accept the challenge,” and most importantly, that he is “coming home.” His goal of appealing to his Cleveland fans’ emotions succeeded as he ensured them that they are his motivation, and that playing in their city makes him happy. 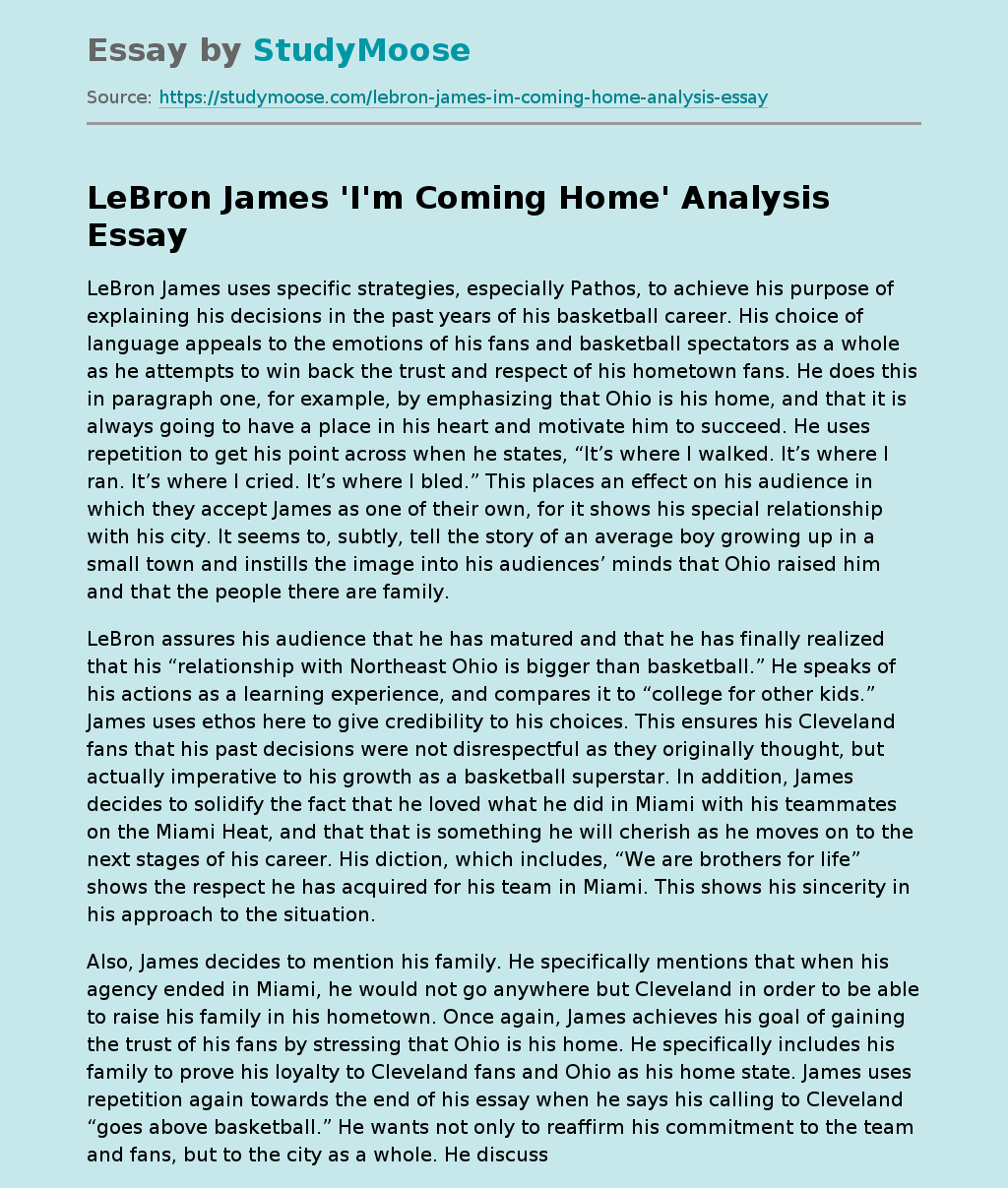