Coming of age is a prominent theme in ‘Her First Ball’ by Katherine Mansfield. It is expressed in the plot, wherein an adolescent girl attends her first ball and is fascinated and thrilled by it all. Her hopes are then let down by an older gentleman who cruelly reminds her that she will soon be an old lady with no happiness and excitement left in her life. Mansfield depicts the theme of growing up in title, language, literary devices and characterization.

Don't use plagiarized sources. Get your custom essay on
“ Coming of age is a prominent theme in Her First Ball by Katherine Mansfield ”
Get custom paper
NEW! smart matching with writer

The title, ‘Her First Ball’, clearly states the subject of the story while maintaining the implications of growth and ageing. The use of the pronoun, ‘her’, instead of the name, Leila, shows how ubiquitous this process- how every woman has had a first ball that is a milestone in their journey to adulthood. This reiterates the notion that Leila, like everyone else will grow up and will no longer be the ecstatic young girl in awe of everything, whether it be for better or worse.

The word ‘first’ implies youth and the change that comes with ageing. It suggests many more balls and experiences to come and marks this incident as a milestone in her life.

Another technique Mansfield uses to express the theme of growing up in the story is the language. The language in ‘Her First Ball’ is extremely descriptive and ornate. She uses irony in ‘I can’t see a single invisible hairpin!’. This adds to the humor of the story. This also suggests the idiocy and stupidity of the youth, lost in the thrilling chaos of the ball.

Mansfield also uses elaborate phrases to capture the magnificence of the ball and how Leila feels about it such as the alliterative phrase, ‘gleaming golden floor’. The words ‘gleaming’ and ‘golden’ both represent an epitome of beauty and splendor that is contrasted with descriptions from Leila’s school. The phrase ‘ dusty smelling hall- with calico texts on the wall’ provides a juxtaposition between Leila’s past and her present to show beyond doubt the changes in her life as she ages.

An additional aspect of language that brings out the significant experience of the ball is the register used in ‘Her First Ball’. It is one of informal 18th century British English. Mansfield uses words and phrases such as ‘Twig’, ‘Oh, I say’ and ‘Pardon’. This adds to the authenticity of he story and emphasizes the setting and time.

The tone used in ‘Her First Ball’ changes often in the story, which adds to the notion of change and growth. Although, it’s a third person narrative, it captures Leila’s feeling very effectively in the tone. At the start of the story, the tone is one of excitement and anxiety. Leila feels unsure yet thrilled about how the ball will be and also feels slightly out of place being a country girl. She expresses her doubts and the tone is also one of wistfulness and longing to be like everyone else. As the story progresses, the tone becomes more ecstatic and admiring of the ball. The hall, the people and the experience is absolutely thrilling to Leila.

This excitement is represented in the tone until she converses with the fat, old man. He reminds her that this is only temporary and this happiness will soon be replaced with a feeling of sadness and longing to be youthful once again. This brings upon a new tone into the story- one of dismay and dread. Leila knows it’s inevitable and her visions of a life of joy and come crashing down. However, the tone soon changes to one of renewed happiness and everlasting joy. The music changes to something better and she loses herself in the dance, forgetting the words of the fat man; forgetting him altogether. The frequent changes in tone conceivably represent the changes in life that come with ageing and development.

The music plays an important part in the story, mirroring the feelings of Leila. ‘with rabbit ears thumping the cold piano’ is a description of Leila’s boarding school dance lessons that were uncomfortable and a drag to her. This contrasts with ‘a soft, melting, ravishing tune’. The words chosen describe the music as an art or even as a food- ‘soft’, ‘melting’. This shows the overwhelming joy Leila feels in the fantastic ball. However, after the fat old man reminds Leila of her fate, ‘the music seemed to change; it sounded sad, sad’. The music that once ‘rose upon a wave’ now ‘rose upon a sigh’. This illustrates the quick changes in mood symptomatic of the youth, the gullibility and naivety as well. Even more so, Leila doesn’t even recognize him with the advent of another dance and has forgotten her dreadful encounter, which adds to the notion of the growing up and the mercurial changes in adolescence.

Perhaps the most potent techniques to show the theme of ageing are the literary devices used. Mansfield uses an array of similes, metaphors and imagery to capture the scene and Leila’s emotions. The metaphor ‘all became one beautiful flying wheel’ expresses Leila’s intense happiness and high spirits. The old man, the antagonist, is described with the simile ‘ his coat looked as if it was dusty with French chalk’. It shows his lack of involvement in the ball and in it’s customs that comes with age. Another sign of this is when Leila’s partners ‘were not more interested’ and joyful about the ball as she was. This shows the inevitable mellowing down that Leila will, like everybody else, achieve. The author also uses visual imagery at the end of the story to show how the reminder of the inexorable affects Leila. Although she is initially dissatisfied, she soon notices that ‘the stars they had long beams like wind’. This phrase with striking visual imagery marks the end of her short period of unhappiness and signifies her change in mood to once again being delighted.

This leads to an important idea in the story, that adds to the characterization of Leila. The old man’s attempt to remind her of her destiny, however cruelly done, is quite true. Leila remembers this for only a short period of time before returning to her admiring self. This shows that the reminder of her future has fallen on deaf ears and that Leila is so intent on having a good time she forgets her worries and perhaps that she simply doesn’t consider the advisory anything more than a bitter man’s negative opinion. Her lack of heed to her wake up call indicates the naivety of the youth. She is quick to forget unpleasant experiences rather than to learn from them and ignores the prospect of growing up entirely as it upsets her.

An important idea in the story is one of symbolism. There are many symbols in the story, Leila being on of youth. She represents the curiosity and happiness of adolescence along with the gullibility and inanity. She lives in the present, which is seen both positively and negatively in the story. Her ability to concentrate on the current happenings result in her extreme joy and thrill from the dancing and fun of the ball but also result in her sadness on meeting the fat man. The ball changes from her heaven to a place where she must face her inexorable depressing fate. However, it is this quality of hers that leads her to forget her bad memory and move on to the pleasures of life, even if they are short lived.

The Old man on the other hand, could be a symbol of wisdom. When he first meets her he says ‘ Do I remember this bright little face’ although he’s obviously never seen her before. This creates an atmosphere of eerie knowledge around him. His shabby appearance and the fact that he dances with the youth despite his age sets him apart from the rest of the gentlemen and marks him as different. His age, his correct conjecture that it’s Leila’s first ball and his accurate prediction of her future signifies that he perhaps plays the role of a symbol of wisdom and knowledge. The fact that Leila forgets him suggests her immaturity and her inability to see past the present.

Thus, Mansfield perhaps tries to achieve the notion of the pettiness and fatuity as well as happiness and celebration of the youth in the story and its contents. She uses the plot to describe an incident where Leila is at her most happy and later, probably her least. The ending of the story shows Leila’s resilience, or rather, her ignorance. While centered on the theme of coming of age, I feel that Mansfield used the many effective literary techniques and the conclusion of the story to show that Leila has, essentially, not matured.

Coming of age is a prominent theme in Her First Ball by Katherine Mansfield. (2017, Nov 02). Retrieved from http://studymoose.com/coming-of-age-is-a-prominent-theme-in-her-first-ball-by-katherine-mansfield-essay 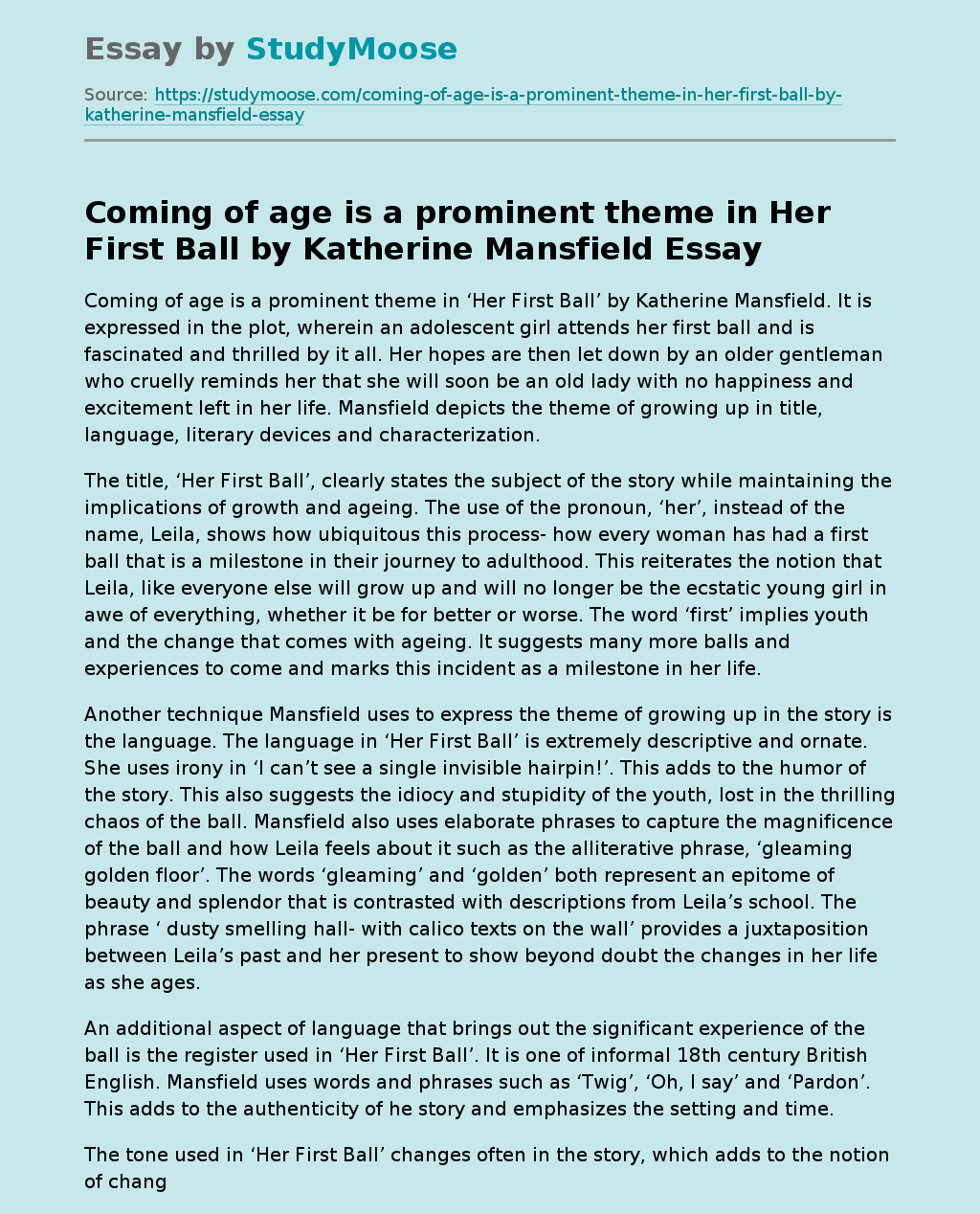