Katherine Mansfield A Cup of Tea

I really like “A Cup of Tea” a lot. It, among other things, does a brilliant job of depicting matrimonial jealousy and insecurity. Our lead character is a very wealthy young woman, Rosemary, seemingly recently married. Her time is largely taken up with looking for ways to spend money. As the story opens she has just bought a small box in an exquisite shop, the cost is about six months pay for an ordinary working man of the time Rosemary has been reading Dostoevsky lately and when she is approached by a very bedraggled looking young woman asking for the price of a cup of tea she is at first put off but then she decides to have a bit of an adventure.

Don't use plagiarized sources. Get your custom essay on
“ Katherine Mansfield A Cup of Tea ”
Get custom paper
NEW! smart matching with writer

She invites the girl to come home with her.

The girl is so hungry she overcomes her fear at talking with someone so far above her station in life and agrees to go with Rosemary. So Rosemary takes her home feeling a triumph as she nets a little captive.

It’s evident that Rosemary is just playing with a prey like a cat does.””Now, I got you”. Rosemary is longing to be generous and is going to prove that as Mansfield writes ‘wonderful things do happen in life, in the life of the upper class, to which Rosemary is a fine example, and it seems that the only things she cares about are her feelings and amusement. After they arrive at the house the action starts in Rosemary’s bedroom.

Mansfield is trying to underline Rosemary’s status “the fire leaping on her wonderful lacquer furniture’, ‘gold cushions’ all these things dazed the poor girl”. Rosemary on her part was very relaxed and pleased; she lit a cigarette instead of taking proper care of Miss Smith. By the way her name is not even mentioned yet, like it’s of no importance at all. We can find the girl on the brink of the psychological despair. Rosemary can’t face the reality the poor as it is; Rosemary Fell sees everything in rose-coloured spectacles, through the filter of the upper class society.

And it looks if not pathetic then quite sad. But after the marvelous meal our creature transforms into something undeniably attractive – “frail creature, a kind of sweet languor. And for Rosemary it’s high time to begin. Instead of asking her name or other decent question Rosemary’s firstly was interested in her meal, it is quite impolite. The Philip enters, smiling his charming smile and asks his wife to come in to the library. He requires explanations from his wife, learning that the girl is as Rosemary says ‘a real pick up’ that Rosemary wanted “to be nice to her. Philip guesses what is all about shows his remonstrance against the idea ‘it simply can’t be done. And then he uses his heavy artillery – calls miss Smith ‘”so astonishingly pretty”.

He knows it will do some harm to his wife. These words immediately heat jealousy in Rosemary’s veins up. “”Pretty? Do you think that?”” and she could help blushing. “She’s absolutely lovely!”” Rosemary looses her temper. She recollects his words over and over. And all leads to the phrase “Miss Smith won’t dine with us tonight”. Rosemary is eager to retain her husband’s attention. Rosemary seems to be so distant from poverty but on the other hand she doesn’t have anything really valuable, like a basement to lead such glorious life in this world : no taste, no wish to see the world in the raw, sometimes no manners, and perhaps even no prettiness.

That’s why she is trying to have things and do things which would help to retain the status like knowing more about the poor and having beautiful things to be associated with. To put in a nutshell the story is reach in different stylistic devices and I think conveys a distinct and valuable message. The story, “A Cup of Tea” tells us how people show generosity to people whom they consider their inferior. People do so partly to show off their superiority to the poorer beings. Generosity in most cases is only to satisfy one’s ego. The story shows how generosity and benevolence evaporates when the object of pity goes against one’s self interest, ego and vanity.

Katherine Mansfield A Cup of Tea. (2016, Nov 06). Retrieved from https://studymoose.com/katherine-mansfield-a-cup-of-tea-essay 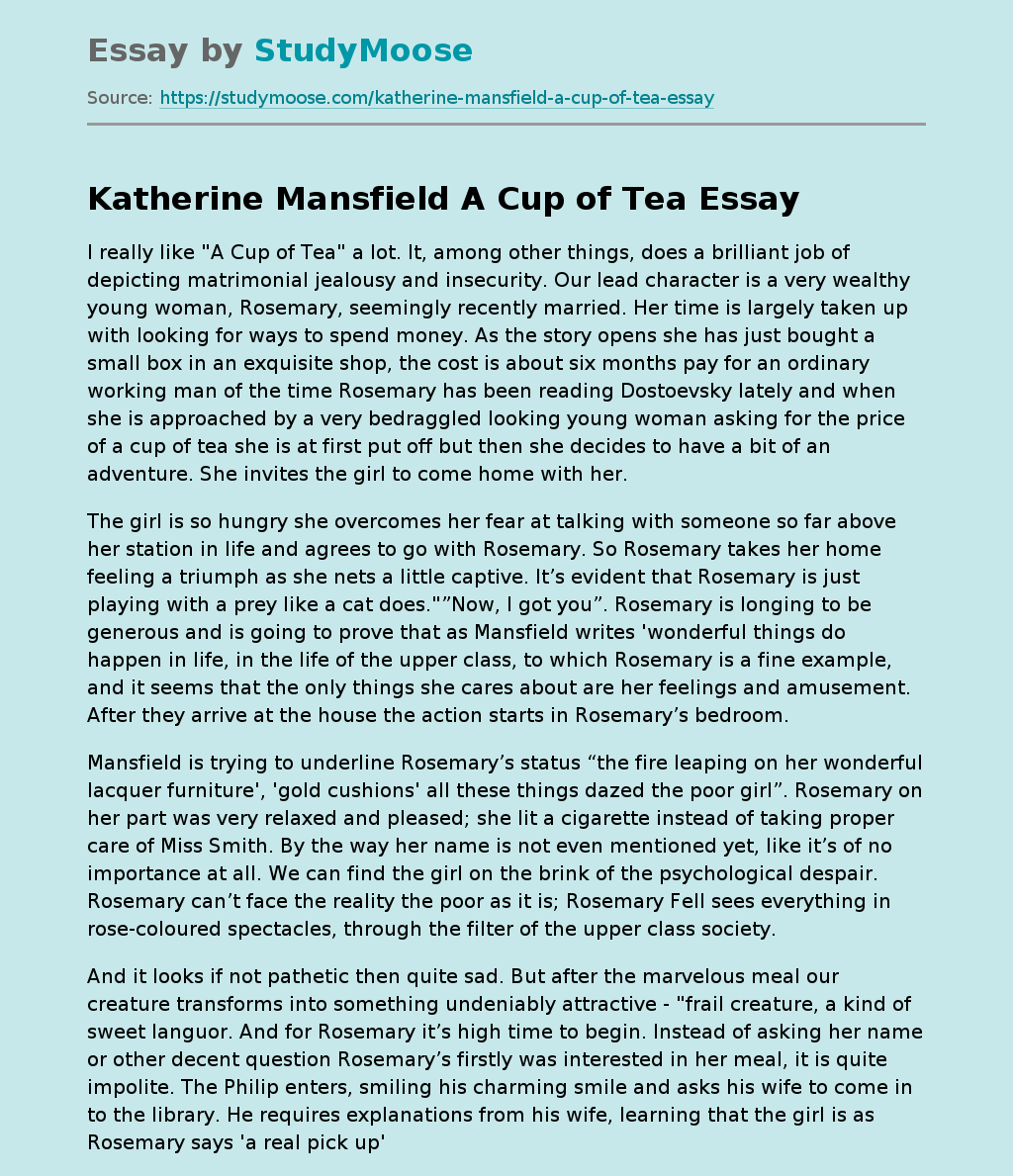