Don't use plagiarized sources. Get your custom essay on
“ Comment on the title ‘A Cup of Tea’ ”
Get custom paper
NEW! smart matching with writer

She is considered one of the great masters of the short-story form. Mansfield’s stories are poetic, delicate, and ironic; they are characterized by a subtle sensitivity to mood and emotion, revealing the inner conflicts her characters face and resolve. Her style much influenced by that of the Russian writer Anton Chekhov, in turn had great influence on later short-story writing.

From the first lines we get acquainted with the protagonist of the story Rosemary Fell and her husband.

The author describes her family and Rosemarys lifestyle: They were rich, really rich, not just comfortably well off. The family is one which is called from the top drawer.

The next key character the reader encounters is a young beggar girl from the Curzon Street. In contrast with Rosemary the girl is without a penny to her name. She is the one to mention the key phrase for the first time. Would you let me have the price of a cup of tea? Rosemary is extremely surprised by the absence of money.

How extraordinary! To Rosemary it looks such an adventure like something from an imaginary book. And she asks the girl “Come home to tea with me.”So here we can trace that a cup of tea is the first thing from which the adventure begins. In fact, they meet each other because of the girls intense desire to have money for the price of a cup of tea. So a cup of tea plays key role in the plot it allows the two women meet each other. And Rosemary invites her using convention of tea drinking as a pretext. Come home with me now in my car and have tea.

After the meal with tea Miss Smith transforms into something undeniable attractive. When the tea-table was carried away a new being, a light, frail creature with tangled hair, dark lips, deep, lighted eyes… Then Philip appears, he knows his wife well and clearly sees what this is all about. He plays on his wifes jealousy and makes this mischievous adventure stop.

The author tries to underline the gap between the rich and the poor. The authors modality shows that theres nothing kind in this irregular adventure which began upon the pretext of having a cup of tea. To break social standards is thrilling when you read about it in books but it wont do in real life. As a result, the a cup of tea adventure leads to Rosemarys inner conflict she asks herself whether Philip thinks she is pretty or he is so dazzled by the beggar girl.

To crown it all, the title a cup of tea corresponds to the main developments of the story. Its is like a universal symbol which helps to unite the key occurrences and make the plot look natural.

Comment on the title 'A Cup of Tea'. (2021, Nov 27). Retrieved from https://studymoose.com/comment-on-the-title-a-cup-of-tea-essay 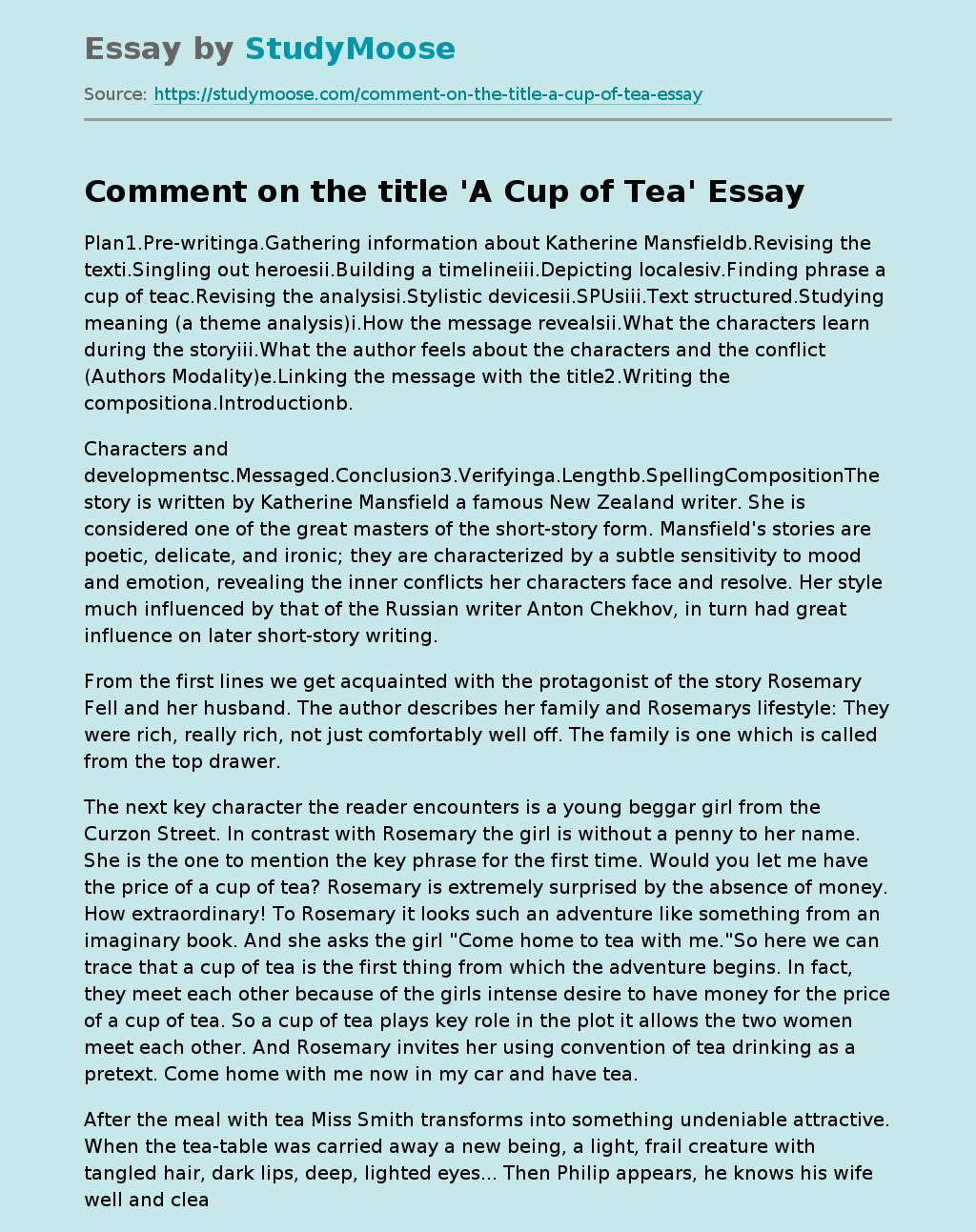