The text under analysis is written by Hector Hugh Munro, better known by the pen name Saki, was a British writer, whose witty and sometimes macabre[] stories satirized Edwardian [] society and culture. He is considered to be a master of the short story and is often compared to O. Henry and Dorothy Parker. In this story we learn about a young man James Cushat-Prinkly. He decides to marry and his relatives approve this idea. They find marriageable girl named Joan Sebastable.

However, he marries another girl, whose name is Rhoda Ellam. The text is written in 3rd person narration. There are both types of sentences – simple and composite. Composite are used to show that the story is about people from high society. And shorts are used when the main character`s thoughts are described. The main character in this story is James Cushat-Prinkly. He is described indirectly as we know what kind of person he is through his behavior and through his thoughts.

He does things as a person of his society should do. So, he thinks that he should marry but he is not so interested in it.

We can see his point at it here: “James Cushat-Prinkly was a young man who had always had a settled conviction that one of these days he would marry; up to the age of thirty-four he had done nothing to justify that conviction.” He liked women but “without singling out”. His lack of initiative shows us that he doesn`t really want to marry.

His relatives really worry for this situation: “His lack of initiative in this matter aroused a certain amount of impatience among the sentimentally-minded women-folk of his home circle”. His mother, sisters and others are presented as a collective body that is not satisfied by this state. The author calls James`s delay dilatory approach which is a very subtle irony. “Married state” is one more interesting thing. Munro calls marriage as “married state” using periphrasis to show that it was very delicate business for all of them. It is said that all his sisters and aunts regarded his approach “with a disapproval that was far from being inarticulate”.

This is a litotes that creates an understatement. It identify them as people from high society that`s why bookish words are used. The following part of the sentence: “His most innocent flirtations were watched with the straining eagerness” proves us that even his sisters were much more interested in his marriage. The author describes his sisters with the help of words: “walk-beseeching dog-eyes”. He compares women with dogs who are very loyal and love their masters very much. With the help of metaphor Munro displays women`s position in the society. “Decent-souled” is an epithet that is employed to describe a noble person from high society. The author uses periphrasis again by calling James mortal. It creates the atmosphere of the high society again. The whole phrase “pleading of several pairs of walk-beseeching dog-eyes” is a good example of periphrasis. The choice of words shows social order and conviction of people of that time. “Enamoured of some nice marriageable girl” is one more periphrasis for marriage. This word is avoided through the whole story as the characters really afraid to call it so. In this part of sentence: “When his Uncle Jules departed this life” departed his life is an euphemism.

The characters avoid even saying the word “marriage” so they don`t pronounce such words like “dead” or “death”. They avoid them too. “Comfortable little legacy” is an epithet depicting us that he got rather good heritage but they talk about it in a modest way. “Discovering someone to share it with him” – it is one more periphrasis for marriage. Also here we see reasoning of marriage – if someone has money why not to marry? In the next sentence we come across morphological repetition: “The process of discovery was carried” to accentuate again avoiding the word “marriage”. We can notice that he plays passive role in this situation: “The process of discovery was carried on more by the force of suggestion and the weight of public opinion than by any initiative of his own”. He just goes with the streams. “The weight of public opinion” which is a metonymy shows again that he hasn`t got any initiative.

“A clear working majority” is a periphrasis too that shows us that even he is grown up he still can`t take the decisions. After the future wife for James was chosen, marriage is started to be called so – “to whom he might propose marriage”. It means that there are no excuses for avoiding it as the choice is already taken. James is really afraid of ordinary way of life. We can see it here: “the prescribed stages of congratulations, present-receiving, Norwegian or Mediterranean hotels, and eventual domesticity.” It is the chronological order for life stages and he doesn`t like it at all. “It was necessary however to ask the lady what she thought about the matter” – through irony the author shows us that the question of marriage for James was like some business and also it seemed to him to be the solved problem. “Individual effort” which is a metonymy accentuate one more time on his lack of initiative. It says that now he has to do something. “As the thing was going to be done he was glad to feel that he was going to get it settled and off his mind that afternoon.” Again we come across periphrasis. Now thing means proposal.

However, later he calls it by its name because submits it – “Proposing marriage, even to a nice girl like Joan, was a rather irksome business”. He calls marriage and proposing it irksome business so he has some business-like attitude to it. The usage of the word “preliminary” proves his attitude as it refers to the business semantic field. Also while he was going to his future wife he thinks not about proposal – “He wondered what Minorca was really like as a place to stop in; in his mind’s eye it was an island in perpetual half-mourning, with black or white Minorca hens running all over it.” It one more time shows that he is not interested in proposal at all. While he was thinking about that island “His Mediterranean musings were interrupted by the sound of a clock striking the half-hour.” His thoughts are called musings. The choice of bookish word is explained by his belonging to high society. We see the next very short sentence: “Half past four”. It is a detachment, elliptical sentence to show that the time for proposal is coming. That moment he felt unhappy: “A frown of dissatisfaction settled on his face.” It proves one more time how much he is not interested in that marriage.

He imagines ho he would come to her place. Even now he doesn`t imagine the girl he thinks about place: “He would arrive at the Sebastable mansion just at the hour of afternoon tea”. He compares her voice with sound of cups: “her voice would tinkle pleasantly”. The word tinkle is used only when we are talking about things but not people. Here it is used to show that all this tea ceremony was senseless for James. He is mad because of that typical for such occasions questions like: “Is it one lump? I forgot. You do take milk, don’t you? Would you like some more hot water, if it’s too strong?”The next paragraph opens with gradation: “Cushat-Prinkly had read of such things in scores of novels, and hundreds of actual experiences had told him that they were true to life.” It is kind of hopelessness. “solemn afternoon hour” which is epithet makes the same effect. He calls question of women little.

She doesn`t ask him a lot of questions about his tea and he pays attention on that contrast between her and other women: “She made no other allusion to food, but talked amusingly and made her visitor talk amusingly too.” The repetition of the word “amusingly” accentuate this contrast. “Cushat-Prinkly found that he was enjoying an excellent tea without having to answer as many questions about it as a Minister for Agriculture might be called on to reply to during an outbreak of cattle plague”. He compares these questions with questions to a Minister. So simile here show that he doesn`t want to answer them. Finally, he marries Rhoda. And we see that everything ends with tea ceremony again – There was a pleasant tinkling note in her voice as she handed him a cup. “You like it weaker than that, don’t you? Shall I put some more hot water to it? No?” Climax in this story can be observed in the part when his sisters accept his choice.

The message of the story is in the desire of James to lead another life not ordinary one. It makes us think about life itself, about the definition of happiness. It is some kind of image of happiness in society but the author makes us think that maybe we shouldn`t be the same as other. The story made me smiling and sad at the same moment. Smiling as it finishes a little bit ironically. He finally gets right that situation that he was afraid of. However, it also makes me sad as I begin to think about things that are told to make us happy but actually don`t. All the people are different and everyone need to find something suiting especially to him or to her. 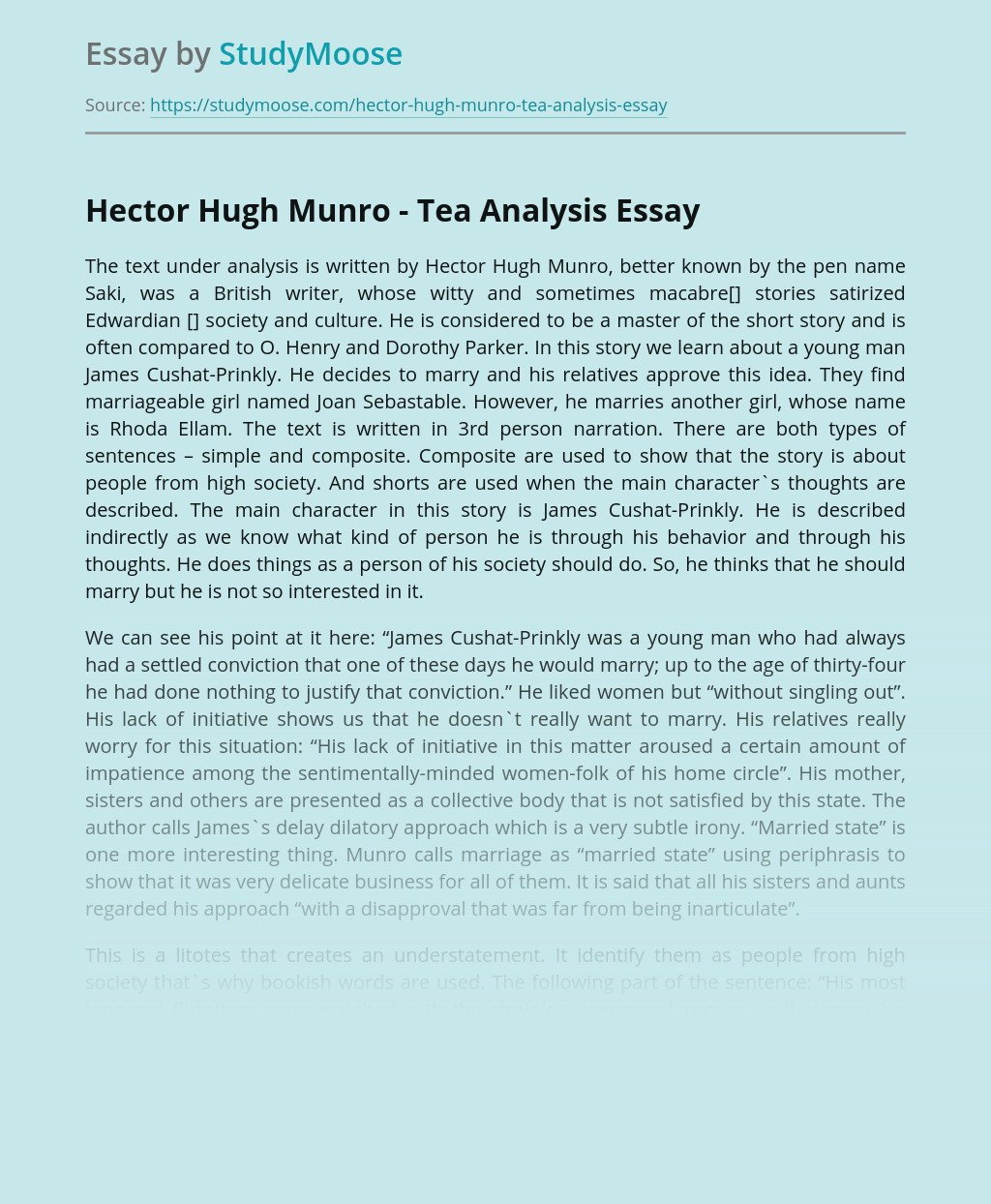