Hector and Helen Characters in The Iliad

The characters in homer’s Iliad have from time to time afforded a first class battleground for scholars and students alike. Through parallels, contrasts, and counter positioning of characters and actions, the principle characters have been analyzed and objectified as embodiments of certain ideals permeating the Greek society. Helen, like Klytaimestra, Pandora, Medea and Phaedra; has been portrayed as the exemplar of the females sub-ordination to the irrational – particularly sex (Thorton. 84). In her, the destructive specter of a mind dominated by passion and compulsive pleasure endangers men: the defenders of the ideals of the polis.

Don't use plagiarized sources. Get your custom essay on
“ Hector and Helen Characters in The Iliad ”
Get custom paper
NEW! smart matching with writer

Here, the threat posed by Helen is two pronged, that is: the irresistible allure of her beauty and the mind confusing fire of sexual lust she ignites; on the other hand, the violation of her marriage to Menelaus by Alexandros precipitates a war which degenerates into a tragic contest for honor and glory. In this essay, the relationship between Helen and Hector will be analyzed with reference the themes outlined above.

In the Iliad, Hector is the bulwark of Trojan defense. He is the only thing which stands between the Achaians and victory.

Besides Achilles, all the other warriors doubt if they can stop him (Il. 15. 639-63. 7; Il. 10. 47-52; Il. 7. 112-114). But Hector’s tragedy is that he is destroyed fighting a war he does not believe in. When he harangues Alexandros for scampering away from Menelaus (Il. 3. 35-55), he not only reveals his disaffection with Paris quarrel, but betrays the fact that to him, the war is about honor and duty – the Achaians maybe rightly-grieved, but it’s his lot to uphold his honor by defending the city (Il.

Equally telling are the evocative epithets he employs to describe Alexandros: Evil Paris, beautiful, woman-crazy, cajoling, better had you never been borne or killed unwedded…… to your father a big sorrow, and your city and all your people to your self a thing shameful, but bringing joy to the enemy. (Il. 3. 35-50) Clearly, it’s no exaggeration to say that Hector views Helen’s marriage to Alexandros as a source of trouble, and a union driven by blind lust. In fact, the impropriety of Helens marriage and the precariousness of her situation are known to all.

Priam has to remind her that she is not to blame (Il. 3. 165-170) and Helen knows that her behavior is indefensible: Helen shining among women ……and I wish bitter death had been what I wanted, when I came hither following your son, forsaking my chamber, my kinsmen, my grown child, and the loveliness of the girls my own age…slut that I am. (Il. 3. 170-180)… Indeed, it can be said that Helen is a good example of how sexual attractiveness confers on the loved one an obsessive value to the detriment of all other obligations. This, it must be added is Hectors opinion of Paris.

Another interesting contrast should be pointed out here: that to the Trojans, Helen is to blame; but to Hector, the blame lies squarely on Paris. A critical look of Helen’s speech at the funeral Hector suggests this much (Il. 24. 765-770). The falsity of Helens marriage, or rather, the inconstancy of Helens emotions is shown, when we are told that after Iris had informed her that her fate was to be decided in a duel between Paris and Menelaus: “the goddess left in her heart sweet longing after her husband of time before and her city and her parents (Il. 3. 138-140). ” Here, Helens irrational nature is in full display.

Her sexual appetite veers constantly: one minute she is longing for her husband of time before (Menelaus), the next moment she is making love to Paris in his bed chamber (its true that they are all under the influence of Aphrodite, but Aphrodite is merely the embodiment of the irresistible force of sexual excitement). Meanwhile, the women of Troy are up and about, all frantic with fear, some are assembling for prayers at the temple of the grey-eyed Athene; others have gathered around Hector, when he lives the battle field, to ask after husband, brothers and neighbors; and the Achaians are dangerously close to the city wall (Il. Book 6).

Helen and Paris, it appears, are immune to these concerns. This scene reinforces the theme of the distraction of the masculine mind when sexual appetite is given free reign. Paris it appears is neglecting his obligation to defend the polis. Hector talks of him thus in front of Hecuba: …while I go in search of Paris, to call him, if he will listen to anything I tell him. How I wish at this moment the earth might open beneath him. The Olympian let him live, a great sorrow to the Trojans, and high-hearted Priam, and all his children.

If only I could see him gone down to the house of the Death God… (Il. 6. 280-284) Again Hector shows the same disgust at Paris when he finds him resting in his house with Helen (Il. 6. 326-330). That Helen’s aberrant sexuality is the cause of the ruckus is further reinforced in her meeting with Hector at Paris House. Helen calls herself “a nasty-bitch evil-intriguing. ” The evocation of bitch imagery is important here. “Dogs are the domestic beasts most intimate with human life, capable of loyal service.

But they also represent unbridled appetite, particularly the female that mates frequently and indiscriminately (Thornton, 82); hence the word denotes a shamelessness resulting from failure to control ones sexual appetite. Interestingly, Helen voices her thirst for a better man, who knows the bounds of propriety in front of Hector (Il. 6. 350-354). We can only surmise that she still has Menelaus in mind. Again the contrast between Hector and Paris is drawn starkly in this episode: Hector rejects Helens entreaties and is eager to assume his rightful role as a defender of the city while Paris has to be persuaded to rejoin the fray (Il. 6. 354-363).

Another episode of interest elaborates the contrast between Andromache, the embodiment of a perfect wife, and Helen. Andromache appears in the epics most endearing scenes. The tender exchange between Andromache and hector reveals to us the importance marriage and the household had to the wife, the qualities of a good wife, and the place she has in her husband heart. We learn that she is a good house wife, prays for her husband, worries constantly about his fate, loves her child and is completely dependent on her husband.

Andromache voices her dependence on Hector thus: “Hector you are father to me, and my honored mother, you are my brother and you it is who are my young husband (Il. 6. 429-431)” her life, it can be said, is inextricably intertwined with his, and her whole identity is predicated on her status as wife and mother. At the same time, hector love and concern for his wife is patently obvious. In a brief moment of prophetic insight, he contemplates the fall of Troy, the death of his family and the fate of Andromache.

In this episode, Hector is moved, not by the future grief of his mother, father and brothers, but by the fate of Andromache as a miserable slave. This episode reinforces my previous argument that Hectors tragedy is the conflict between his desire for Heroic honor and glory and his role as the protector of Troy and his family. This desire for honor and glory, which is somehow linked to his pride (Hector’s hubris is explored in this sections: Il. 8. 535-541; Il. 13. 824-832; Il. 18. 293-309) is what prevents him from liquidating a war which he knows in unjust.

In his last soliloquy, Hector admits this much (Il. 22. 95-120). In short, it can be said that the war was precipitated by the recklessness of two ill-starred lovers, who failed to reign in their sexual passions. According to the customs, the violation of Menelaus marriage by Paris imposed on him and his kinsmen a duty to avenge his honor – which, we are told was the destruction and pillage of Troy. At the time, the ideals of Honor demanded a display of fighting spirit on the part of the Trojans. All this themes are explored repeatedly in the relationship between hector and Helen.

Hector and Helen Characters in The Iliad. (2016, Sep 07). Retrieved from http://studymoose.com/hector-and-helen-characters-in-the-iliad-essay 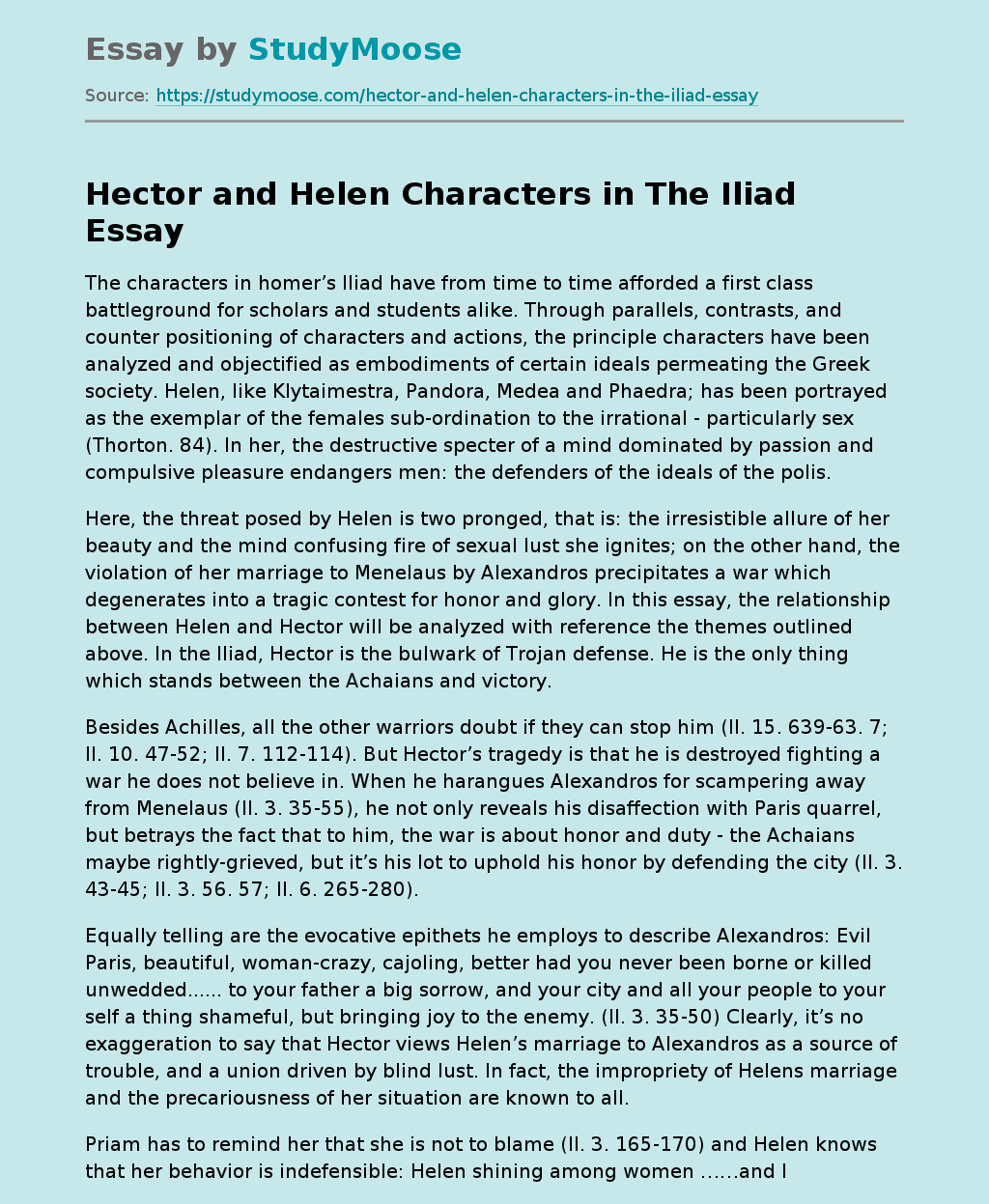