A Poem Helen by Hilda Doolittle

The first thought I come up with when reading Doolittle’s Helen is the extreme difference between her poem, and Poe’s poem, Helen. Doolittle and Poe both describe Helen using her face, eyes, legs, hands, and knees; however, Doolittle expresses the speaker’s growing hatred of Helen while Poe adores her deeply.

Doolittle makes an interesting choice when she says “all Greece” instead of “all Greeks.” She appears to be referring to more than just the people of Greece, but instead the entire culture that lies within Greece.

Don't use plagiarized sources. Get your custom essay on
“ A Poem Helen by Hilda Doolittle ”
Get custom paper
NEW! smart matching with writer

Doolittle expands upon the speaker’s hatred of Helen by including “all Greece,” especially with her continual use of such dark and descriptive words as “hate” and “revile.” I find it interesting that Doolittle starts the first two stanzas with “all Greece” and the third words describing an extreme dislike, and still begins the final (third) stanza with “Greece sees unmoved…” still being insulting towards Helen. The entire poem remains with the same theme, and continues being both vivid and descriptive.

In the first stanza Helen is described with words like olive and white which are both associated with beauty, but she is also described as having “still eyes” which creates the idea of a statue like person. The second stanza becomes more involved with Helen being detested by Greece. She is described as wan and growing paler (white). She is remembering what she did wrong in her past, and this begins to change her beautiful appearance. In the end, Helen progresses to either a completely statue-like stage, or perhaps even death.

She is unmoved with “cool feet,” white, and “amid funereal cypresses.” These words are most associated with death, the skin is a pale color – almost white, and they are cold to the touch, just as Helen is described. She goes into this statue/death stage being hated by Greece for causing the Trojan War. The poem encompasses the fact that Greece has no mercy for Helen, even when she smiles. The only way for her to attain compassion, love, and mercy is through her death.

A Poem Helen by Hilda Doolittle. (2016, Jun 24). Retrieved from https://studymoose.com/a-poem-helen-by-hilda-doolittle-essay 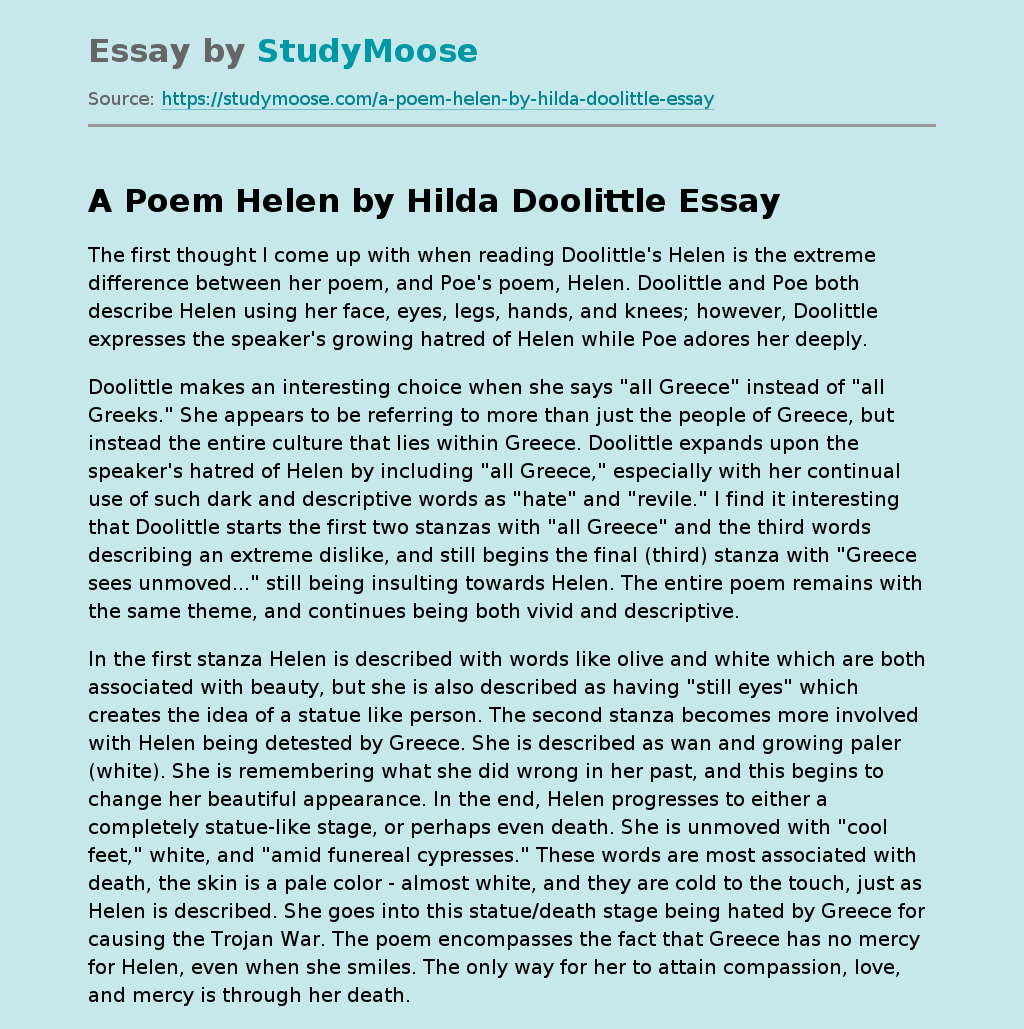