Divergent and convergent plate margins are both studied in plate tectonics; which is the study of the plates that makeup the lithosphere, their movements and how these movements has influenced changes in the surface’s topography (Strahler, 2011, 389). The driving force that causes these plate movements is the gradual movement of the semi-molten rock that makes up the asthenosphere (Kious, 1996, 28). Features observed at these margins share some similarities but, also vary quite largely.

These differences are caused by the different movements displayed at each boundary and the types of plates involved; oceanic or continental.

Don't use plagiarized sources. Get your custom essay on
“ Topographical Features at Divergent and Convergent Plate Margins ”
Get custom paper
NEW! smart matching with writer

Divergent plate boundaries are where two plates are moving apart from one another (Ritter, 2012). The topographic features that develop at this boundary are due to extension of the plate boundaries which causes rifting in continental and oceanic crusts (Strahler, 2011, 419). This extension is caused by rising convectional currents from the asthenosphere, which pushes up on the lithosphere and pulls it apart as the currents move laterally.

For oceanic plates this process stretches and thins the lithosphere until it eventually splits.

This split causes pressure to be released from the super heated rock in the mantle allowing it to melt, rise through the split and cool to form new crust. Though for continental plates this process is a bit different. Since this plate is much thicker than the oceanic plate the lateral movement of the asthenosphere is not strong enough to split the crust smoothly. Rather the crust is pushed upwards and as it is pulled apart, normal faults form at both sides and the center blocks sink forming a rift valley.

There are several topographical features found at divergent plate margins some of which are due to faulting. A fault is a fracture formed on the Earth’s crust as tectonic plates move in different directions. At divergent plate margins normal faults develop, this is where one side of the crust is raised higher than the other as it is pulled apart. This creates a cliff like feature known as a fault scarp. Where large scale normal faulting occurs block mountain ranges can develop. These are mountains with flat tops, fault scarps measuring up to two hundred meters and low lying basins in between.

Another feature is known as a graben where two normal faults occur on opposite side of a section of the lithosphere. These grabens can occur in a series along the divergent margin to form rift valleys. One well known example of this is the East African Rift Valley. Over time these valleys eventually form into new oceans when the continental crust completely pulls apart as seen in the Red Sea (Strahler, 2011, 420 to 424). In divergent plate margins involving two oceanic plates the formation of mid ocean ridges can occur.

This is where rising magma does not fill the gap made as the two plates drift apart causing a gap known as a ridge to develop. The most commonly know example of this feature is the Mid-Atlantic Ridge which is located between Africa and South America. The final feature which is formed due to divergent plate margins are volcanoes. These types of volcanoes are known as rift volcanoes. They develop as basaltic lava rises through the fissures produced by the plates spreading apart (“Volcanoes”). Examples of these volcanoes can be found in Iceland.

Constructive plate margins are the complete opposite of divergent margins. At these boundaries the plates are moving towards each other rather than away. For this reason the features found here although similar in some respects are quite different in their own regard. At convergent plate margins including two oceanic plates there is the subduction or sinking of one of the plates beneath the other. This leads to the formation of deep sea trenches a feature not found at divergent plat margins. This trench develops directly above the subduction zone.

Montserrat. There are also several other features that occur at convergent plate margins including two continental plates. At these margins faulting also exists however instead of normal faulting found at divergent plate margins reverse faulting occurs. This is where due to compression part of the crust rises above the other (“Reverse Faults”). Another aspect that influences topography at these margins is folding. This refers to the compaction of rock upon rock due to compression forces. This folding has led to large mountain ranges such as the Alps.

These ranges main difference to divergent plate margin ranges are the mountains formed here grow exceedingly taller. Finally unlike divergent plate margins convergent zones can have a continental plate colliding with an oceanic plate. In this instance the more dense oceanic plate subducts below the continental plate. This forms a deep sea trench similar to the oceanic plate’s convergence, close to the shoreline. Also volcanic mountain ranges may also develop further in from the shore due to rising magma and folding. Such ranges include the Andes Mountain Range (“Plate Tectonics”).

Diagram 5: showing oceanic to continental plate convergence and resulting features (Pidwirny, 2006) So divergent plate margins are where crustal plates are moving apart from one another. These margins can either consist of two oceanic or two continental plates. Convergent plate margins on the other hand are where two plates are being pushed towards each other. The combination of plates at this margin can be either two continental, two oceanic or an oceanic to continental. Both of these margins play a major role in shaping the Earths topographical features.

Some of which are similar while others different. Both aid in the formation of volcanoes however divergent rift volcanoes do not form cone while convergent andesitic volcanoes do. Both also show faulting however divergent plate margins have normal faults versus the reverse faults found at convergent margins. Deep sea trenches, volcanic islands and fold mountains are exclusive to convergent margins. While rift valleys block mountains and mid ocean ridges are found only at divergent plate margins (“Plate Tectonics”). 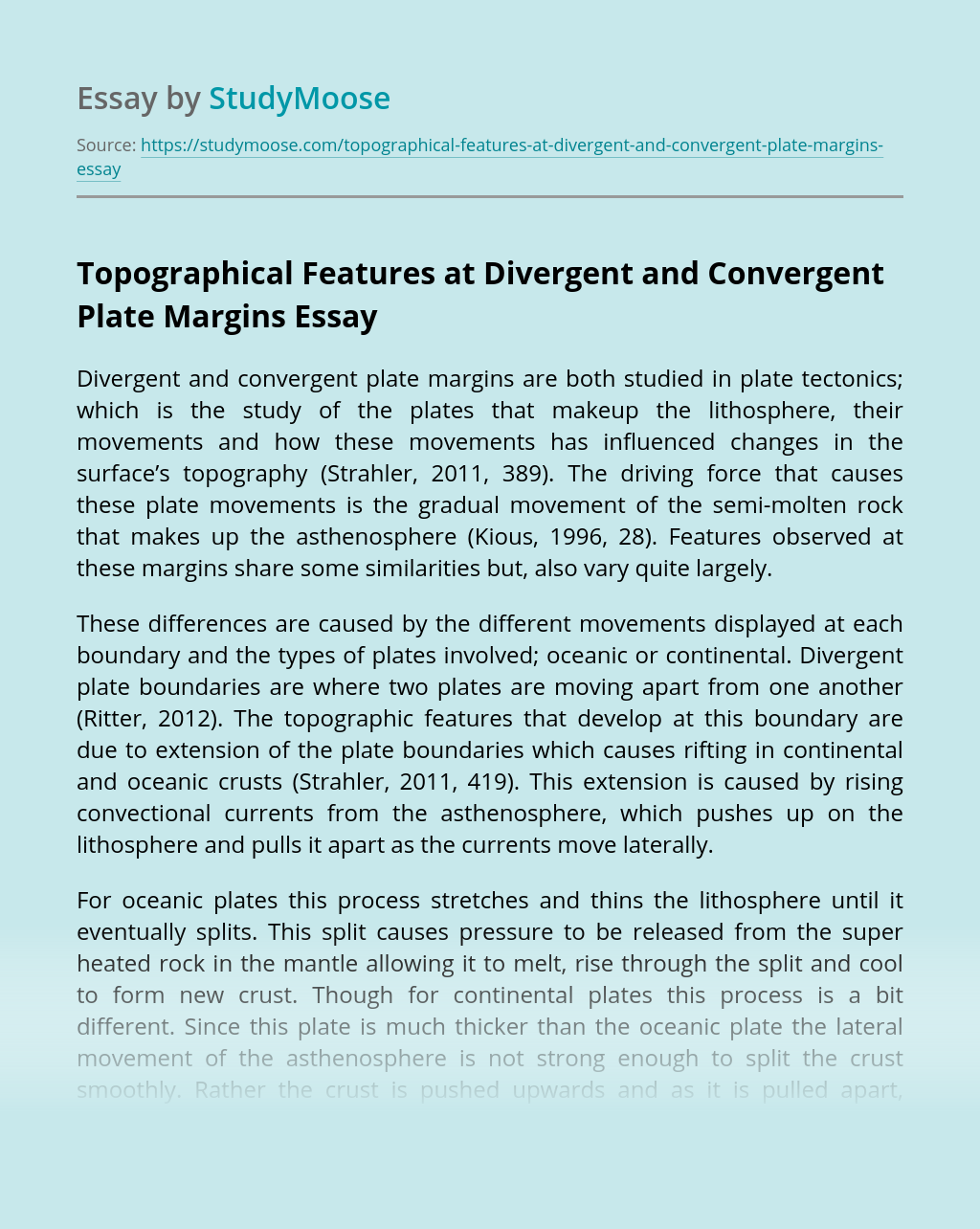