In the story the Iliad, there are two main characters Achilles and Hector, who both are incredible warriors. Achilles is the leader of the Myrmidon soldiers, and he fights for the Greeks. Hector is the son of Kind Priam and he fights for the Trojans. Both of these characters are said to be the strongest and greatest warriors of each of their armies. Both Achilles and Hector have many different heroic characteristics that are the similar and that are very diverse.

Turn in your highest-quality paper
Get a qualified writer to help you with
“ Achilles vs Hector ”
Get high-quality paper
NEW! AI matching with writer

Achilles and Hector both share a similar glory of war and that love is a driving force and both of them have different views that set them apart which are military glory over family life and both of their overall hero characteristics which differ significantly.

The differences between Achilles and Hector are very unique in the since that Achilles is basically the exact opposite of Hector. Hector believes that family comes first, after each battle he will come home and spend time with his wife and children instead of getting congratulated by his people.

Achilles only cares about gaining glory that will last forever, since he knows that he will live a short life by continuing with his actions. But he finally chooses to live a short life so that his name will be remembered forever. When Achilles loses Briseis, he chooses not to fight with the Greeks even though this war is incredibly important to his people of Phthia and Greece. Achilles shows absolutely no support for Greece and doesn’t care about whether they win this war or not.

Achilles begins to act very immature in the since that his fellow Greeks are dying and his soldiers around him want to fight but he chooses not to fight. When Petroclus dies, Achilles is full of absolute rage wanting retaliation for losing him. Achilles goes to Troy to fight Hector, and not only does Achilles kill Hector but he defiles and insults all of Troy by taking Hectors body and dragging his body back with him and leaving it to rot on the beach. Achilles is a very egoistic arrogant person who is only concerned with things that will benefit him and by killing Hector the way he did shows absolute disrespect. Achilles says to Hector before he dies, “My fury would drive me now to hack your flesh away and eat you raw-such agonies you have caused me” (409-411). This proves that Achilles was so mad that he believed the only way to kill him was the way he did.

Furthermore, the similarities between Achilles and Hector are their strength and the fact that both of them are incredible warriors. Achilles is half god and half human which give him his extraordinary strength. Both of them possess a bravery that only exists in true heroes. Achilles and Hector are natural born leaders who all of their soldiers would happily end their life to save their leaders. Hector has an inconceivable amount of love for his country. He is willing to end his life to save the people of Troy. Hector knows that this war was started by his younger brother Paris’ juvenile decision to take Helen from Agamenmon. But instead of scolding his brother, Hector encourages him to fight for his country and his new wife. Hector says to Paris, “Look, your people dying around the city, the steep walls, dying in arms-and all for you” (251-253). Hector loves Paris because he is his brother and wants to help him let their people know that their prince is willing to fight with them. 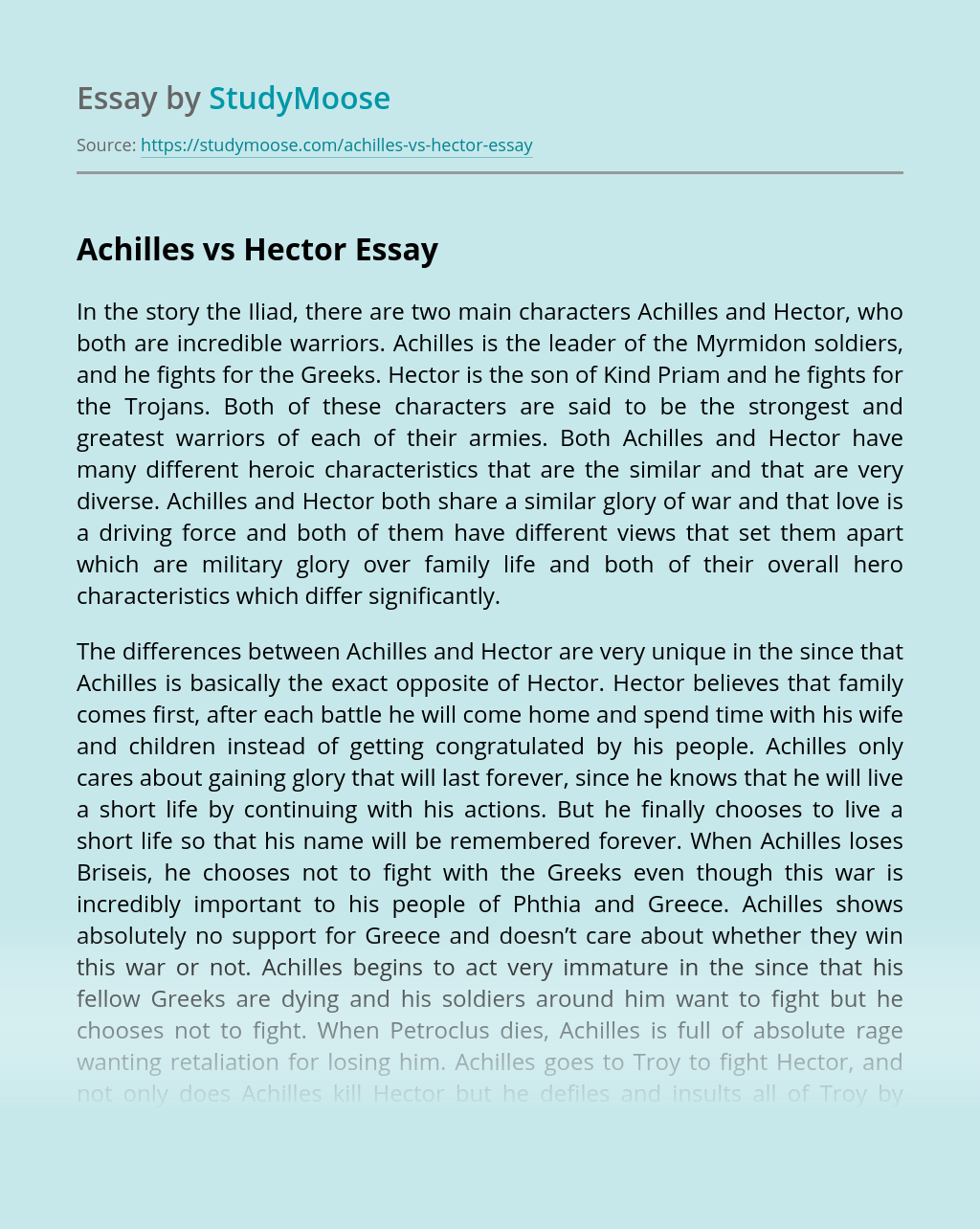 Turn in your highest-quality paper
Get a qualified writer to help you with
“ Achilles vs Hector ”
Get high-quality paper
Helping students since 2015
Stay Safe, Stay Original