Differences Between Beowulf and Achilles

Beowulf and Achilles are different in many ways; one of which is their character. Beowulf is a great warrior and leader who fought to protect his soldiers and to make places more peaceful. He also perfectly embodies the values of loyalty, pride, and courtesy. Achilles, on the other hand, is not as heroic as Beowulf, even thought he was also a great warrior and had superhuman strength, he mostly fought for revenge, social position, and power. He was driven by a thirst for glory.

Turn in your highest-quality paper
Get a qualified writer to help you with
“ Differences Between Beowulf and Achilles ”
Get high-quality paper
NEW! AI matching with writer

Beowulf went on journeys because he wanted to show people that he is a reliable leader and that he can fight pretty much anyone from monsters to dragons and all the other kind of creatures. He also wanted to show people how brave and protective he was. Like the story of his fight with Grendel shows everyone how smart he is about certain things and how he is not afraid of doing anything. The part of the story where Beowulf killed the sea monster shows that he is a reliable warrior and that he gets his job done no matter what he has to do.

As I stated earlier, Achilles mostly fought for social position and power, and the death of his best friend Patroclus, didn’t make Achilles more deliberative or self-reflective, wrath, pride, and bloodlust still consumed him. Achilles would also sacrifice everything just so that his name would be remembered. Which shows that the only that he mostly cares about was himself and what people thought of him.

In my opinion Beowulf is more courageous because he would do just about anything to protect his people and that he is not afraid of anything. He also does that so people would find him as a reliable leader and wouldn’t be afraid to be his followers. I also think that he is more like a true epic hero because unlike Achilles, Beowulf isn’t selfish and he doesn’t seek for power or glory. He was a great warrior even though he didn’t become a king for many years. Beowulf was also more reliable than Achilles, because Beowulf cared about everyone, not just himself unlike Achilles.

Differences Between Beowulf and Achilles. (2016, Jul 22). Retrieved from https://studymoose.com/differences-between-beowulf-and-achilles-essay 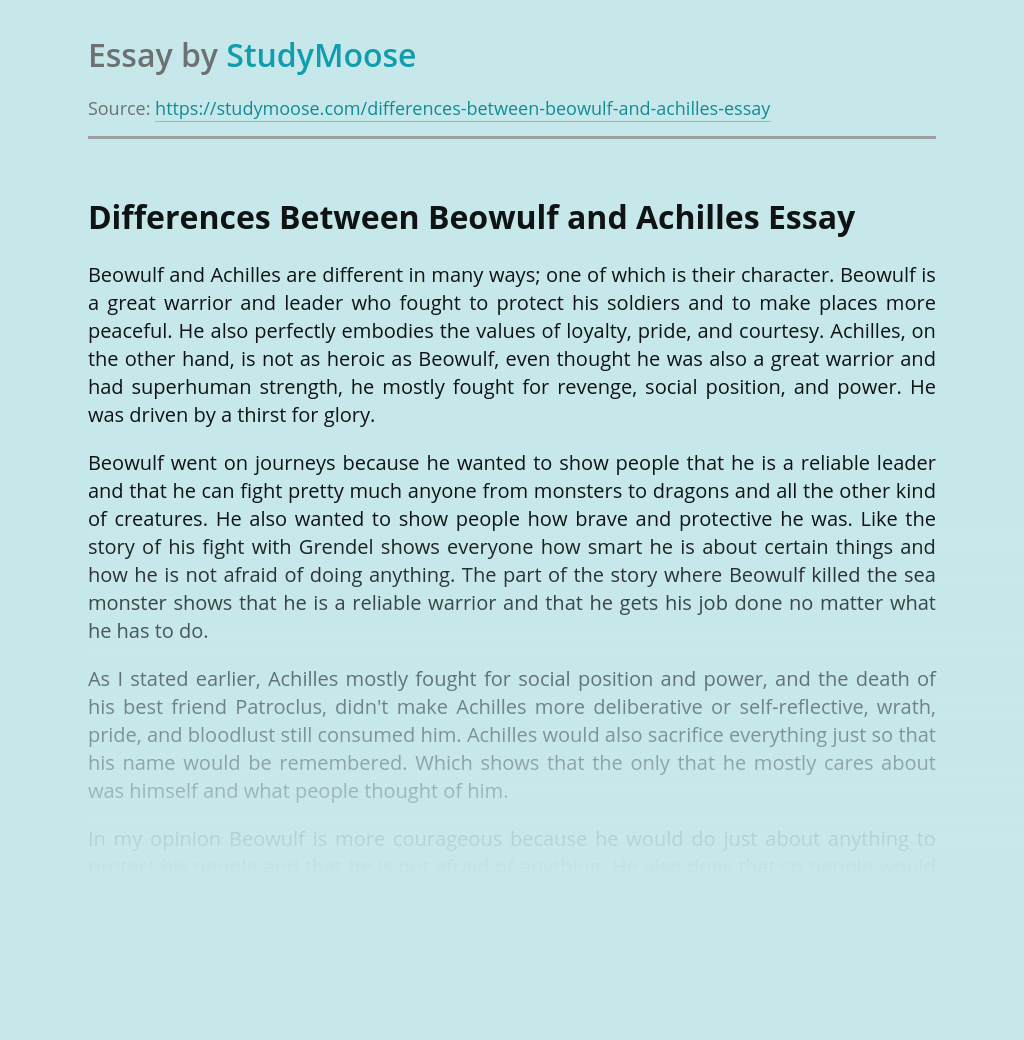 Turn in your highest-quality paper
Get a qualified writer to help you with
“ Differences Between Beowulf and Achilles ”
Get high-quality paper
Helping students since 2015
Stay Safe, Stay Original