The Shield of Memory: An Analysis of Achilles’ Shield in the Iliad

The construction of Achilles’ shield may be considered as one of the most fascinating sections of the Iliad. Within this section, Homer suspends the unfolding of the characters’ fate as he describes the decoration of Achilles’ shield. For Achilles, Hephaestus forges a shield containing the scenes of everyday life. Such a scene comprises his vision of the earthly life, which Achilles forsakes in order to avenge Patroclus’ death. The shield thereby stands in contrast to the other Homeric shields in image and symbolism.

Don't use plagiarized sources. Get your custom essay on
“ The Shield of Memory: An Analysis of Achilles’ Shield in the Iliad ”
Get custom paper
NEW! smart matching with writer

Such a contrast can be understood if one considers that Achilles has full knowledge of the impending death that awaits him as a result of his return to the battlefield. The shield thereby provides a stark contrast to the surrounding brutality of the Trojan War as well as the impending death of both Achilles and Hector. The depictions on the shield of a city celebrating marriage, of a king who is “joyful at heart” (18.557) as the men, women, and children of his community prepare a harvest festival, or of maidens and young men “thinking carefree thoughts” (8.

Furthermore, the god’s [Hephaestus] view of the world as presented in the shield stands in direct contrast to the death-embracing bearer of the shield, Achilles. The shield thereby stands as a medium of irony that serves to portray the end of the War. The shield may be seen as portraying the paradox of Troy. The city as well as the shield are both doomed despite the divinity of its construction. Such a doom is evident if one considers the impending demise of both Achilles and Troy.

The terror wrought by Hephaestus’ shield, however, does not merely lie in the death that it enables in both the ranks of the Trojans and the Greeks. It may be noted that a sensation of terror was associated with the sight of the aforementioned shield in several sections of the Iliad. As Tethis “placed down the arms before Achilles…fear seized all the Myrmidons; not one of them dared to look at the arms straight on, but they shrank back in terror” (19.14-17). Such a terror, however, stood in direct contrast to the anger and delight that it brought to Achilles. Homer notes, “the more he [Achilles] looked, the more anger made its way into him” (19.17).

Along with this anger “he was delighted, holding in his hands the shining gift of the god” (19.17). Such a contrast in terms of the reaction towards the shield may be understood if one considers that, the shield functions as a reminder for the Myrmidon’s of the impeding savagery that will result from the actions of the shield’s bearer. The contrasting reactions of anger and delight, on the bearer of the shield, on the other hand, may be seen as resulting from the vengeance that the shield enables as well as the future that the shield depicts as unavailable to its bearer.

The shield that Hephaestus forged for Achilles in the Iliad thereby stands a symbol for the paradoxes evident in the Trojan War. Such a paradox is evident in the last plight of Achilles himself as he chooses vengeance and personal victory as opposed to life.

The Shield of Memory: An Analysis of Achilles’ Shield in the Iliad. (2017, Apr 03). Retrieved from https://studymoose.com/the-shield-of-memory-an-analysis-of-achilles-shield-in-the-iliad-essay 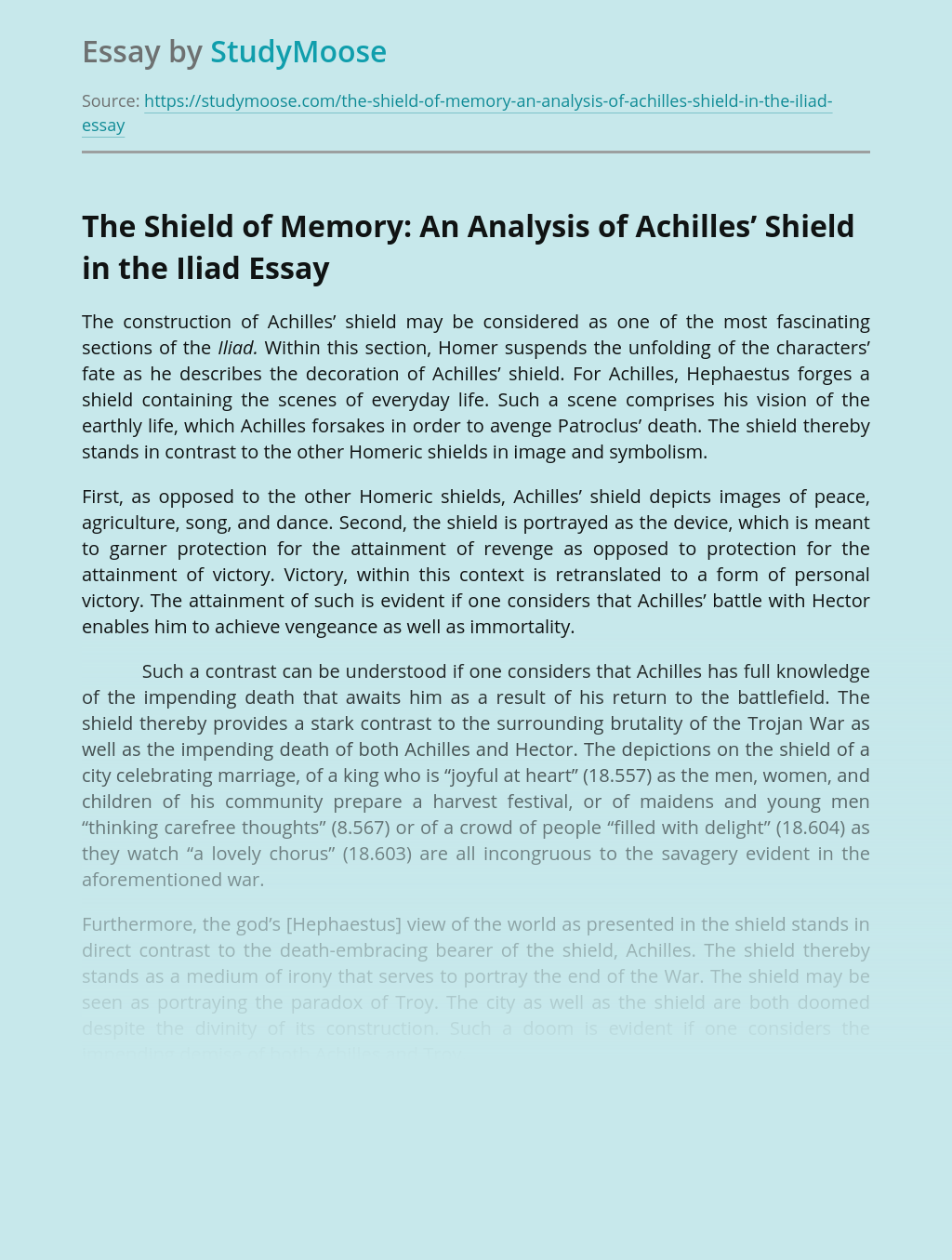