Achilles as the Anti-Hero in Homer's "Iliad"

From beginning to end of Homer’s The Iliad, Achilles is portrayed as a man stagnant in his ways. He is arrogant, impatient, unforgiving, vengeful, and extremely stubborn, and these awful attributes never cease. Achilles’ lack of compassion perplexes the present situation involving the Achaens and the Trojans by making it difficult to figure out which side is truly good and evil–both sides have good reason to fight. Even though Achilles is set in his ignorant ways, he does manage to do some good at the end of the story.

Don't use plagiarized sources. Get your custom essay on
“ Achilles as the Anti-Hero in Homer’s “Iliad” ”
Get custom paper
NEW! smart matching with writer

However, even though he displays this act of unselfishness, the fury within Achilles causes him to remain the unchanging, selfish man that he truly is.

Agamemnon has just insulted Achilles in front of all the Achaeans, and, because of this incident, Achilles decides to return home rather than stay and fight with his own people. Returning to his tent, Achilles calls upon his mother, Thetis, a goddess, to beg Zeus for one favor:

‘Persuade him, somehow, to help the Trojan cause, / to pin the Achaeans back against their ships, / trap them round the bay and mow them down.

Rather than put his anger aside and continue to help in the battle, Achilles, being the best warrior, not only stops fighting, he summons his mother to ask Zeus to make his people suffer.

His pride and arrogance overrun his rational thinking, and his attempt to make his own people suffer as he watches makes his disgusting behavior incomprehensible.

Zeus complies with Thetis’ request, and the Trojans eventually force the Achaeans back to their ships. After many great losses, Agamemnon sends messengers to Achilles to ask the great warrior to rejoin the battle. Reviewing the gifts of Agamemnon, Achilles replies, “‘I say no wealth is worth my life!'” (9.488). Although this is a noble statement, Achilles answers more out of anger and haste. His inability to listen to reason and understand the full scope of the Achaean’s dreadful situation allows a transparent look inside the workings of a mind consumed with revenge. Achilles begins The Iliad with anger, and that anger within him never ceases.

After hearing Achilles’ pitiful excuses for not returning to battle, Ajax retorts, “‘Achilles– / he’s made his own proud spirit so wild in his chest, / so savage, not a thought for his comrades’ love– / we honored him past all others by the ships. / Hard ruthless man'” (9.768-71). Ajax’s words represent the solidity of Achilles’ ways. Due to his stubbornness, Achilles has now lost the respect of the men that once worshipped him like a god.

Ajax concludes his speech to Achilles:

‘You–the gods have planted / a cruel, relentless fury in your chest! All for a girl, / just one, and here we offer you seven–outstanding beauties– / that, and a treasure trove besides. Achilles, / put some human kindness in your heart’ (9.778-81).

This statement by Ajax is extremely important because he draws upon the fact that Achilles is the offspring of the immortal goddess, Thetis. Although Achilles is mortal he exudes god-like qualities that are envied and worshipped by his friends and enemies. The fact that Ajax has to remind Achilles to act human focuses the attention to the irrational behavior of the gods themselves. Achilles’ actions are no more irrational than those of the gods, and he continues to emulate their vengeful behavior until his demise.

The most important turning point in The Iliad is the loss of Achilles friend, Patroclus. After plunging his spear into Patroclus, Hector mocks the orders of Achilles:

‘Now don’t come back to the hollow ships, you hear?– / Patrolclus, master horseman– / not till you’ve slashed the shirt around his chest / and soaked it red in the blood of man-killing Hector!’ / So he must have commanded–you maniac, you obeyed (16.482-86).

Although Hector believes that Achilles sent Patroclus to drive the Trojans back to their city walls, some truth lies within his statement. Achilles realizes that the Achaens need his presence and fighting ability in order to win the war over the Trojans, but once again he stubbornly refuses to assist in what he views as Agamemnon’s war. He agrees to lend his armor to Patroclus instead, and by not parting with his vengeful feelings against Agamemnon and joining the fight, he becomes responsible for the death of his friend at the hands of Hector.

The death of Patroclus forces Achilles to put his differences with Agamemnon aside and fight once more. The acts of Achilles after the death of Hector offer a glimpse inside his horrible nature:

So he triumphed / and now he was bent on outrage, on shaming noble Hector. / Piercing the tendons, ankle to heel behind both feet, / he knotted straps of rawhide through them both, / lashed them to his chariot, left the head to drag / and mounting the car, hoisting the famous arms aboard, / he whipped his team to a run and breakneck on they flew, / holding nothing back (22.465-72).

Realizing he was about to die, Hector begs Achilles to allow his body to remain with his people for proper burial. Achilles shockingly mocks and scorns Hector, then, after brutally killing him, drags his naked body at the walls of Troy for all Trojans to witness. Although it is common for armies to take their dead enemies and display them as a sign of victory, the fact that Hector takes a moment to ask Achilles to be respectful of his dead body reveals much about the two warriors. Achilles is now being compared to Hector, whose deep feelings for family and love greatly contrast the shallow concerns of Achilles. Even after he agrees to give Hector’s body back Troy, for a price of course, Achilles remains as he did in the beginning of the story–uncompassionate to the human condition.

The Iliad is the story of Achilles’ fury, but Homer’s attempts to show character development and maturity fail, and what is left is a broken shell of a man who chooses to die on the battlefield rather than marry, settle down, and be content with himself. Achilles’ feeble attempt to show compassion for Hector’s father, Priam, is an act that is spawned only by the threats and commands of the gods. If Achilles had made the decision by his own free will to do an act of decency, perhaps then some sympathy for him would be in order. The Iliad offers insight into the mentality of men who are driven by greed, lust, anger, and revenge–themes that will run throughout the course of history until this very day.

Achilles as the Anti-Hero in Homer's "Iliad". (2016, Jun 30). Retrieved from http://studymoose.com/achilles-as-the-anti-hero-in-homers-iliad-essay 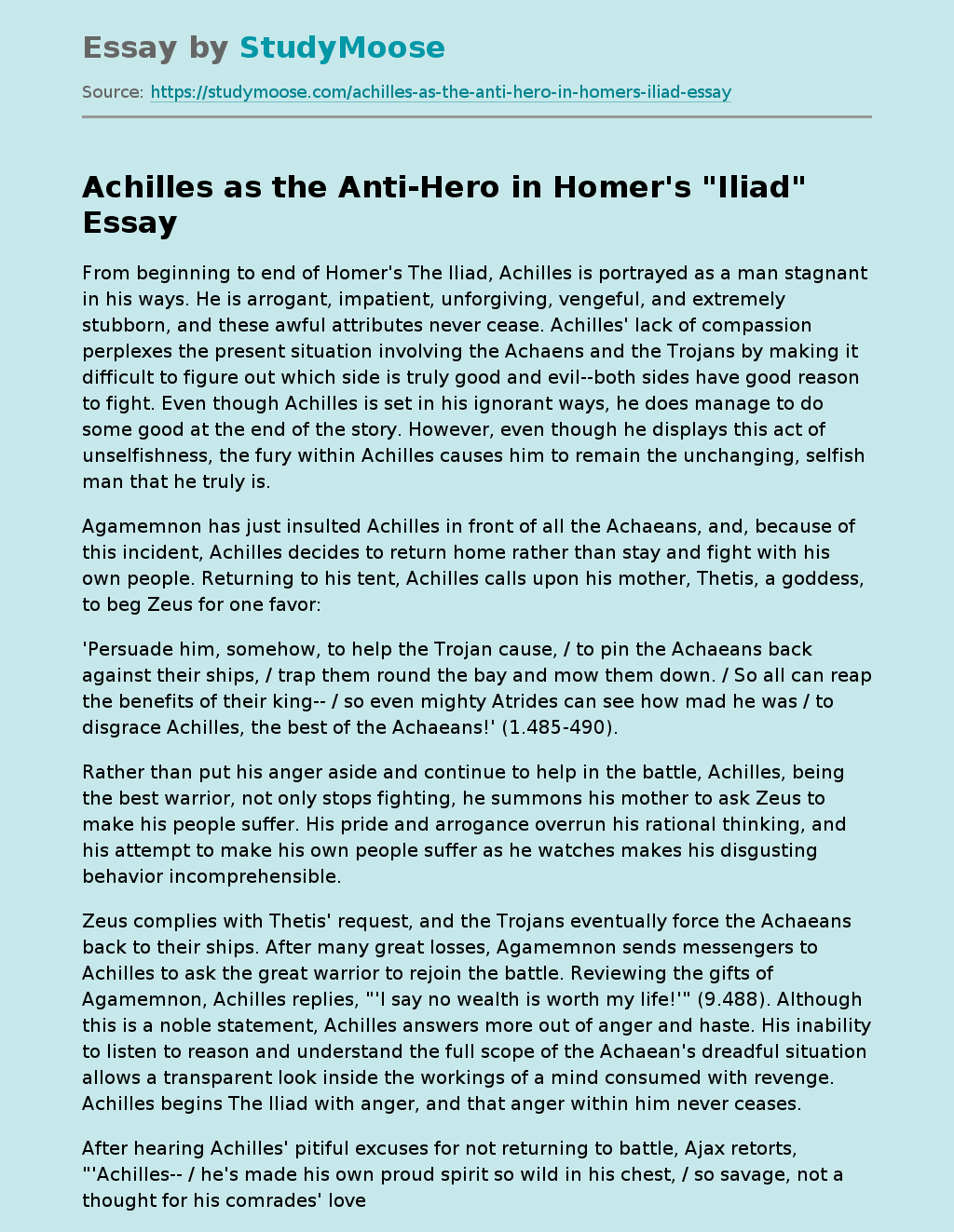