Film Analysis of Helen of Troy

In the film, Helen of Troy one of the main character is Achilles, the demigod warrior, a highly skilled and the strongest champion of Greece which also showed his soft side – his kindness, care, love for a woman and brotherly love for his cousin, Petraclus. The film really captured my idea of Achilles based on the book of Greek mythology. I think anyone who will watch attentively in the film will understand and capture the idea of character Achilles. Aside Achilles there are other important characters in the film such as Agamemnon – ruler of Greece, Menelaus – king of Mycenae, Paris – prince of Troy, Hector – brother of Paris, and Helen – the cause of great war.

Don't use plagiarized sources. Get your custom essay on
“ Film Analysis of Helen of Troy ”
Get custom paper
NEW! smart matching with writer

Each character has strengths and weaknesses. Agamemnon was a proud and aggressive king because of that hundreds of his men died and they’re defeated by Trojans, an apparent weakness of him. Agamemnon strength is his men that following all his orders and respected him.

Menelaus is just the same of Agamemnon, they have the same characteristic and the same strength and weaknesses, in my opinion.

Paris weakness is his being coward and unskillful fighter even he was favored by Gods. King Priam a good thinker and always weigh every possibility and ask opinions of council before he made a decision but like his son Paris he is not a skilled fighter. Hector one of the son of King Priam unlike Paris he is a skilled fighter a brave and aggressive one but his weakness are his confidence and having no mercy that is why Achilles killed him in a battle.

Lastly, Helen’s strength is her irresistible beauty that every man in the kingdom wants to protect her. Helen’s weakness showed when she was seduced by Paris. The Gods of Greek mythology were actually not seen in the entire film aside from mother of Achilles a minor goddess.

Gods wasn’t really there in the action but there were times that the characters calling them or praying in the name of Gods. I could say that the film is quite different from the original story. It is more real and less of fantasy that is why Gods were not really in the scene and doesn’t play an important role based on the film. The cousin of Achilles namely Patroclus is one of the important character in the story. Achilles really cares to his cousin, he doesn’t want Patroclus to fight but because Patroclus really wanted to he disguise as his cousin, Achilles that lead to a fight to Hector who defeated and stab him to death. Achilles rage in anger, he became totally mad and sad in the death of his beloved cousin.

Achilles doesn’t wants to participate anymore in the war because of his quarrel to Agamemnon but because of the death of Patroclus he had decided to fight again against the Trojans. Achilles leads the attack to the kingdom of Troy and his men conquer the troy but he was been killed by an arrow thrown by coward prince Paris. One of the most dramatic scenes in the film was the dialogue of king Priam and Achilles over the body of Hector. King Priam bravely went to the tavern of Achilles secretly to please and beg for the body of his beloved son Hector.

He kneeled down and kiss the hand of Achilles while saying that “I`m the father of the warrior you have been killed and begging you to please return his body to me. “, king Priam was crying in front of Achilles and pleasing Achilles to return the body. Then after Achilles convinced that he should return the body of Hector to his father king Priam to have a decent burial like what he did to his beloved cousin Patroclus. Achilles kindly let king Priam walk away and ensured their security with the body of Hector and he also let his woman to go with king Priam but he said that nothing will change they’re still enemies.

On my own opinion the depiction of characters in the film is similar to the original story but the whole film is not accurately based on the book or the epic. The film is entertaining but it should not be use to study the epic of Homer because there are some changes and revisions from the original story. The film focus on actions and it depicts reality of war rather than the fantasy of Greek mythology. However the experienced of watching it is great especially to watch it with other students in the classroom.

Film Analysis of Helen of Troy. (2016, Dec 02). Retrieved from http://studymoose.com/film-analysis-of-helen-of-troy-essay 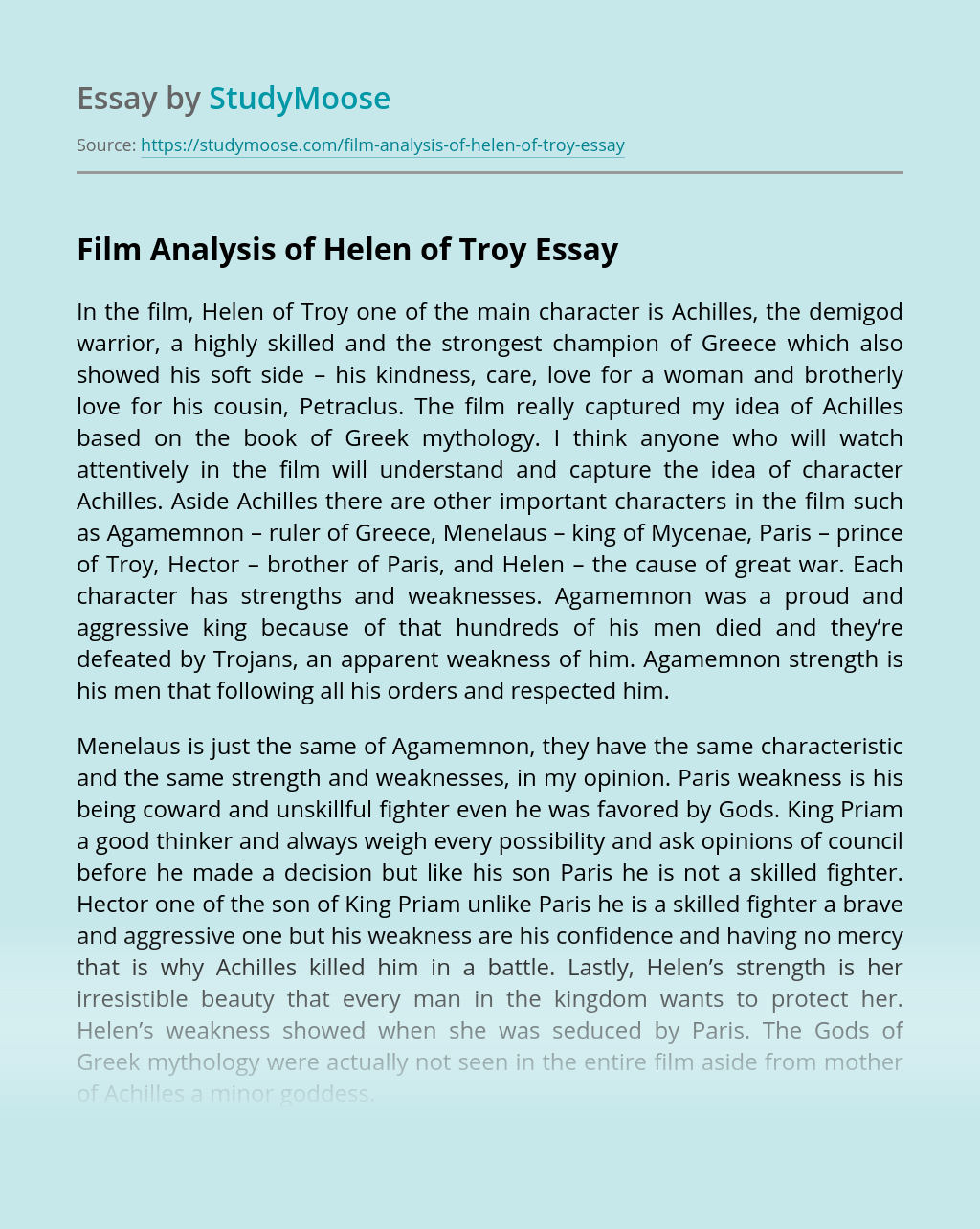