Why was arête (‘virtue’) an important theme in Homer’s Iliad? Select two characters with which to make your points.

Virtue or arête was an important quality in Homeric society and one which features very heavily in the Iliad. Arête is achieved by one’s actions, generally in battle and is a combination of qualities such as courage, honour (‘time’) and sacrifice.([good] Homeric heroes possessed these qualities and they were recognised by the audience of the epics.

Don't use plagiarized sources. Get your custom essay on
“ Arête (‘Virtue’) Theme in Homer’s Iliad ”
Get custom paper
NEW! smart matching with writer

( Outwardly, the heroes of the Iliad and the ones who possess arête in the greatest quantities are Achilles and Hector, equal heroes on each side of the Trojan war. In equal measure, although slightly less predominantly, is the arête displayed by Nestor and Priam, King of Troy.(

Achilles was born to an immortal goddess and his fate determined that his was to be a short, albeit glorious life. He had been warned that the war in Troy would spell his doom; however, seeking glory and honour the mighty Achilles went to war and was a force to be reckoned with.

His honour is exhibited best by two main instances in this poem: the first, in regards to the war itself. [I think that you are confusing ‘honour/time’ with ‘arete’ ]

Achilles had been offended by Agamemnon who had taken Achilles’ prize (the slave-girl, Briseis) from him; this had offended Achilles because, in a sense, by taking Briseis Agamemnon had also taken [change to ‘insulted’] his honour.([good] In retaliation for this attack on his honour, Achilles refused to rejoin the war for the Greek army.

[you could indicate the extent of Achilles’ anger by referring to ‘Iliad’1.407-412 where he begs his mother to ask Zeus to help the Trojans against the Greeks because of Agamemnon’s actions]

However, when Achilles saw that the Trojans were gaining headway in the war and gaining ground, he felt that a suitable substitute would be to allow his comrade, Patroclus to don his armour and rejoin the fight to give the Greeks the moral boost they desperately needed and also as an attempt to intimidate the Trojan army.(

During the course of the battle which ensued, as a result of Patroclus imitating Achilles, Patroclus is killed by Hector, hero of Troy. When Achilles hears that his beloved comrade and friend has perished at the hands of Hector, he rejoins the fight and in his rage kills Trojans indiscriminately and mercilessly including the Trojan hero, Hector. Achilles mourns for his friend and believes it is important that he receive the proper funeral rights [spelling ‘rites’].

The funeral rights [‘rites’] are an important part of Greek and Homeric culture and it is important that those who are killed, particularly in battle, are accorded the proper rights [‘rites’] to enable them to enter the world of Hades.(The funeral pyre and rights [‘rites’] are important not merely for religious reasons but they also ensured that the hero who has perished is honoured accordingly. Achilles shows that he is respectful and honourable by ensuring that Patroclus receives the rights and respect that he deserves as a hero.

Achilles also displays his greatness for a second time in a very gracious manner when Priam, King of Troy comes to his tent to bargain for the return of the body of his beloved son Hector, whom Achilles has killed in battle. Priam comes to bargain for the body of his son in order to ensure he receives the appropriate funeral rights [‘rites’] and therefore, receive the honour he deserves as a hero. By bargaining for the body of Hector using gifts of “gold, goblets and linens”, Priam is ensuring that Achilles is not robbed of his prize and, therefore, his honour.([true because the hero’s image and status in the eyes of everyone was of the utmost importance] Priam strikes close to Achilles’ heart by bargaining for Hector’s body to ensure it is accorded the funeral rights [‘rites’], especially so close after the death of Patroclus.

Priam acknowledges that Achilles is a strong and brave man and Achilles in turn acknowledges the bravery of the King. Achilles, however, as well as displaying greatness, bravery and hospitality is also an angry man, so angry in fact that after he had killed Hector he had taken his body and dragged it round the funeral mound of Patroclus. [Yes, he was doing this from intense anger but his anger was really directed at himself; he was trying to expiate his own feelings of guilt over the death of Patroclus]

Priam is a proud man and rightly so. He is the ruler of Troy and has led his kingdom to victory in many battles and has many sons who have fought in these wars and are brave warriors, none more so than Hector, breaker of horses. Despite his pride Priam also displays a very humble nature and it is this quality that takes him to Achilles to bargain for the body of his beloved son, Hector.

Priam is visited by a divine messenger who promises that he will be protected if he is to go to the Achaeans. Priam believes in the gods and believes that what the gods have said will be done. He is a faithful and religious man and has provided many sacrifices to the gods, particularly to the god Apollo who favours the Trojans. Priam takes the advice of the messenger and gathers items with which he can bargain for Hector. This example is a symbol of the arête which is possessed by Priam.

This is further shown when Priam goes to the tent of Achilles and instead of speaking to him as one would an enemy, Priam converses with Achilles with respect and dignity and almost as one would speak to a son. Priam even goes so far as to describe what he is going through to what Achilles’ own father would experience should Achilles perish. This experience shows Priam’s qualities at their very best.[I agree that this scene shows both men at their very best but ‘arete’ is not one of those qualities on show here; more like humility and courage on the part of Priam and maturity and compassion on the part of Achilles ]

These two men are both respected in their own circles and are both extremely honourable men in their own ways, Achilles as a brave warrior and Priam as a noble and righteous King. They are each individually respected because of the qualities they exhibit and by, not only, how they treat other people but by how they behave when faced with difficult situations. Priam displays great courage by going to the tent of Achilles and is faced with the possibility that Achilles could kill him.( It is a testament to how much Priam loves his son and the strength of his religious views that he braves this journey to ensure Hector receives his funeral rights [‘rites’]. We can also see from this encounter the qualities of Achilles. Rather than treating Priam like his enemy he treats Priam simply like a human being. “Achilles appears to go beyond the conventional idea of friend and enemy seeing Priam and himself simply as fellow human beings living in the same world of sorrows bestowed by the gods.” (Homer and the Greek dark age, page 61). 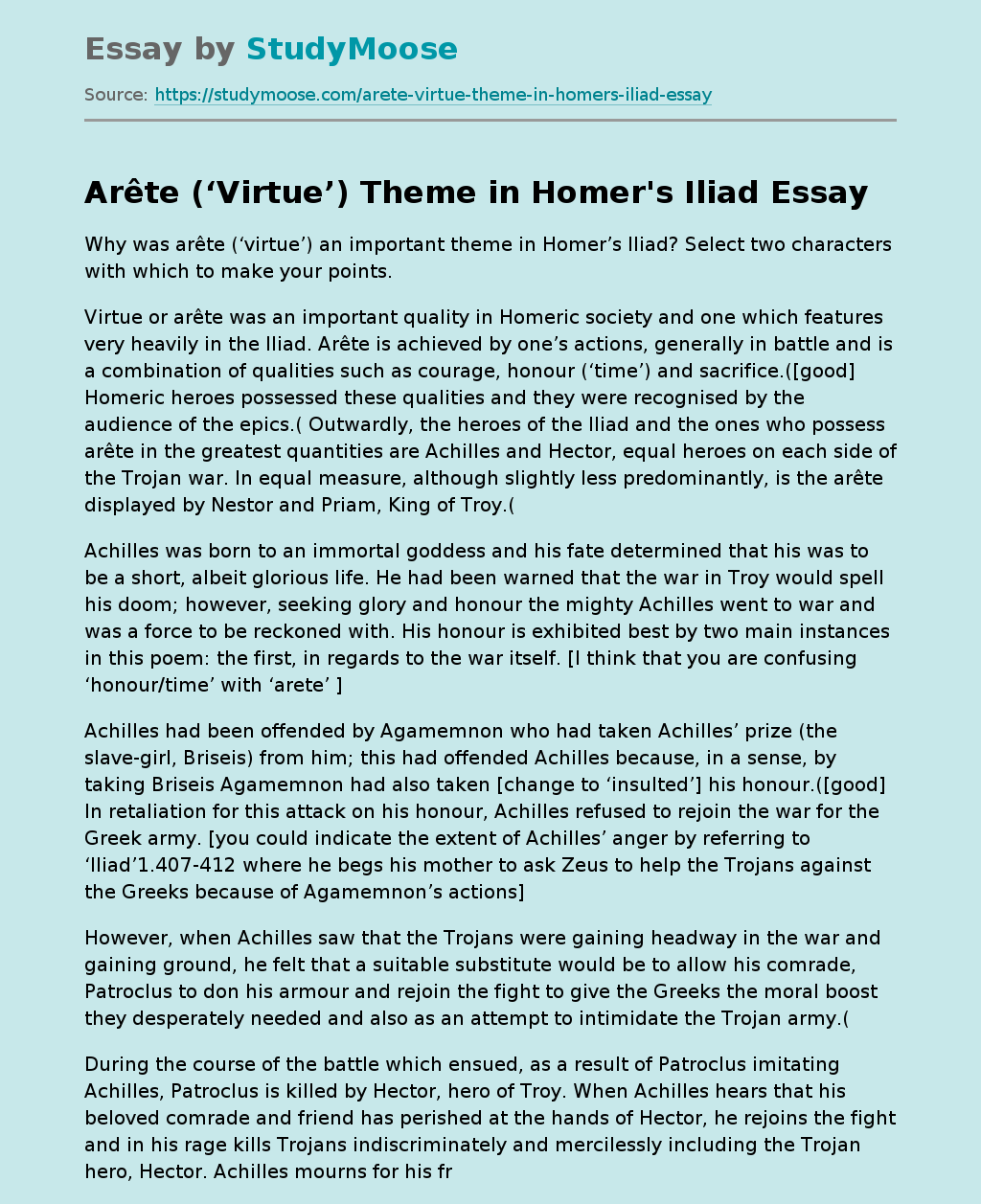