In Homer’s epic “The Iliad” the main character, Achilles, is not really the typical run of the mill hero. Even though he is a great warrior he doesn’t come off as one in the epic. His rage constantly comes up when his feelings get hurt or someone insults him. Because of this he stops fighting with his own people all because he has been offended by his commander, Agamemnon. It is not till after his friend gets killed in battle that he re-enters the war, only again because of his rage has overtaken him.

Turn in your highest-quality paper
Get a qualified writer to help you with
“ Character Analysis – Achilles ”
Get high-quality paper
NEW! AI matching with writer

This rage continues on after he avenges his friend’s death but his anger is finally resolved when Hector’s father Priam comes asking for his dead son’s body. Even though Achilles was a very swift tempered man, in the end he did finally show some sympathy for another.

In the beginning of the epic Achilles was not in the battle because of his anger.

As Fenno (2008) stated that Athena urged him to not go into battle while he was angry against Agamemnon (para. 6). Because he felt slighted by Agamenon he just sat by the ships for most of the epic. Lombardo (2009) also stated that just to spite his commander he withdrew from battle due to his anger (p. 1790). Again one can see that his anger was the root cause of why he did not enter into battle.

After finding out that Achilles’ friend, Patroclus, was killed in battle his rage again then took over and he entered the battle.

Fenno (2008) quoted that “Hector will not cease from fighting until such time as Achilles rouses himself on the day when battle rages around a slain Patroclus” (para.7). This shows the rage that Achilles brought up inside of him due to his fallen friend. Lombardo (2009) also stated that because of Achilles’ wrath and withdrawal from entering into battle, caused a heavy consequence upon the Achaeans but more so upon Achilles himself (p. 170). Here you can see how he probably felt guilty of his friends’ death in battle and how this rage was a way to make amends.

Once Achilles entered into the battle, his rage was focused more on vengeance upon Hector. After Achilles and Hector stopped running, as shown by Lombardo (2009), Hector tried to cut a deal with Achilles, but Achilles alluded that he hated him to the core, comparing a wolves to a lamb, and would not honor his request to not dishonor his corpse” (p. 248). Also after the death of Hector he then took his body, tied it to a chariot and dragged it around (p. 252). This rage kept continuing on after he had a funeral for his friend Patroclus as shown again by his need to drag Hector’s corpse around Patroclus’ tomb 3 times (p. 255).

Lombardo (2009) shows that once King Priam came to Achilles begging for his body, he was physically moved by the sight of the King, and remembered that he too has a father that he would never see again and both of them wept together (pp. 170-171). This is where Achilles softer side finally comes out and allows for Hector’s body to be returned to Priam for proper burial. Now after all the rage has left Achilles, he is now at peace with himself which could be because of his soon to come fate.

Achilles, character wise, does not develop or change over the course of the Iliad for the most part. With the death of his friend Patroclus he is prompted to seek reconcile from Agamemnon, but that focuses his rage toward Hector. Due to this his lust for vengeance and his overwhelming pride overtake him. He ends up desecrating Hector’s body at the funeral of his dead friend Patroclus. It was not until King Priam came begging for Hector’s body that Achilles’ was free from his anger and returned the body to King Priam because of the memory of his father, Peleus. This shows that in the end, even though Achilles had a great temper, he was able to show his softer side and slightly transform into a kinder person. 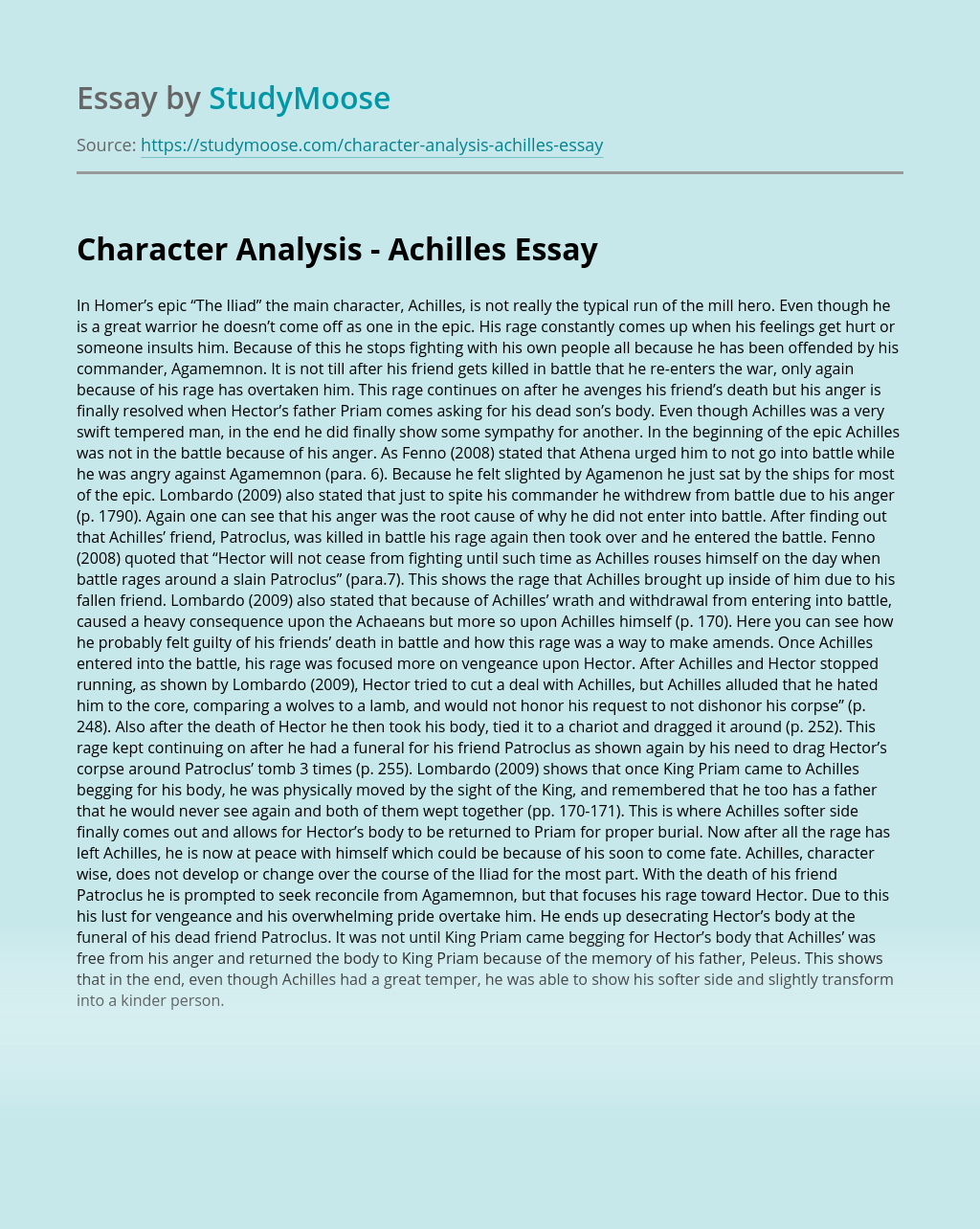 Turn in your highest-quality paper
Get a qualified writer to help you with
“ Character Analysis – Achilles ”
Get high-quality paper
Helping students since 2015
Stay Safe, Stay Original