Who is perfect; certainly not John Purcel in Hugh Garner’s short story “The Father” about a desperate alcoholic father (John Purcel) trying to get closer to his son (Johnny) who seems to be slowly drifting away from him. This will be demonstrated through out a series of examples which will prove the father’s drinking problem, his neglective attitude towards his son and his low self esteem.

Alcohol can control a person’s life and make them irresponsible which affects their relationships.

Turn in your highest-quality paper
Get a qualified writer to help you with
“ Communication Problems in Hugh Garner’s “The Father” ”
Get high-quality paper
NEW! AI matching with writer

John Purcell showed a lack of judgment by stopping to have a drink before he even got home from work making him late for the scout meeting with his son. His irresponsibility continued when he met another irresponsible drunken father at the meeting. When the stranger offered John a drink, he gladly accepted the offer stating “you’re a lifesaver”. Due to his drunkenness, John Purcell embarrassed his son even further.

“In a paroxysm of pride and happiness he grasped the boy’s hand, and facing the audience, held it aloft like a referee signaling the winner of a boxing bout.

There was a short burst of embarrassed laughter from the tables”.

His drinking affected his actions and caused his son to be humiliated in front of his friends. It is very difficult to have a healthy relationship with someone when you are controlled by alcohol.

Building good relationships involves time and effort. John Purcell never put any effort into trying to know his son because “most of the time he was too preoccupied with other things to pay much heed to the boy’s activities”.

He never encouraged or supported Johnny and never participated or went to any of his son’s events. He did not even know what baseball or swimming team Johnny was on. When the curate, Mr. Redpath, complimented Johnny on his exceptional swimming ability, the father realized that “he seemed to know less about the boy than anyone”. However, he made the excuse that his son “was only a twelve-year-old who wanted to be left alone”. Because the father was so involved in himself, he did not make the time or put forth the effort to develop a proper relationship with his son.

A person who has low self-esteem finds it difficult to care for others and himself. John Purcell did not know the scout leaders and the other fathers; he stereotyped them as being “sissies and goons”. When he discovered that Johnny did not have the full scout uniform because of lack of money, his first response was “What’s the matter with this family anyway? God knows what the neighbours must think of me.” What others thought was more important to him than his own family. Even though he was cheap with his family, he didn’t want others to know about it.

He was very insecure which caused him to feel out of place and unsure of himself. Even when he had made an effort to show an interest in his son, he had been “pointedly ignored” contributing more to his feelings of inadequacy as a father. When one feels like a total failure, it is difficult to have any positive relationships because you are always worried about what others think.

In conclusion Johnny’s father finally realized he had to change in order to be closer to his son. It would be hard for John Purcell to have a close relationship with his son due to his lack of interest in him, his alcoholism, and his lack of self-esteem. John’s negative personality dominated his relationships with his son and others. 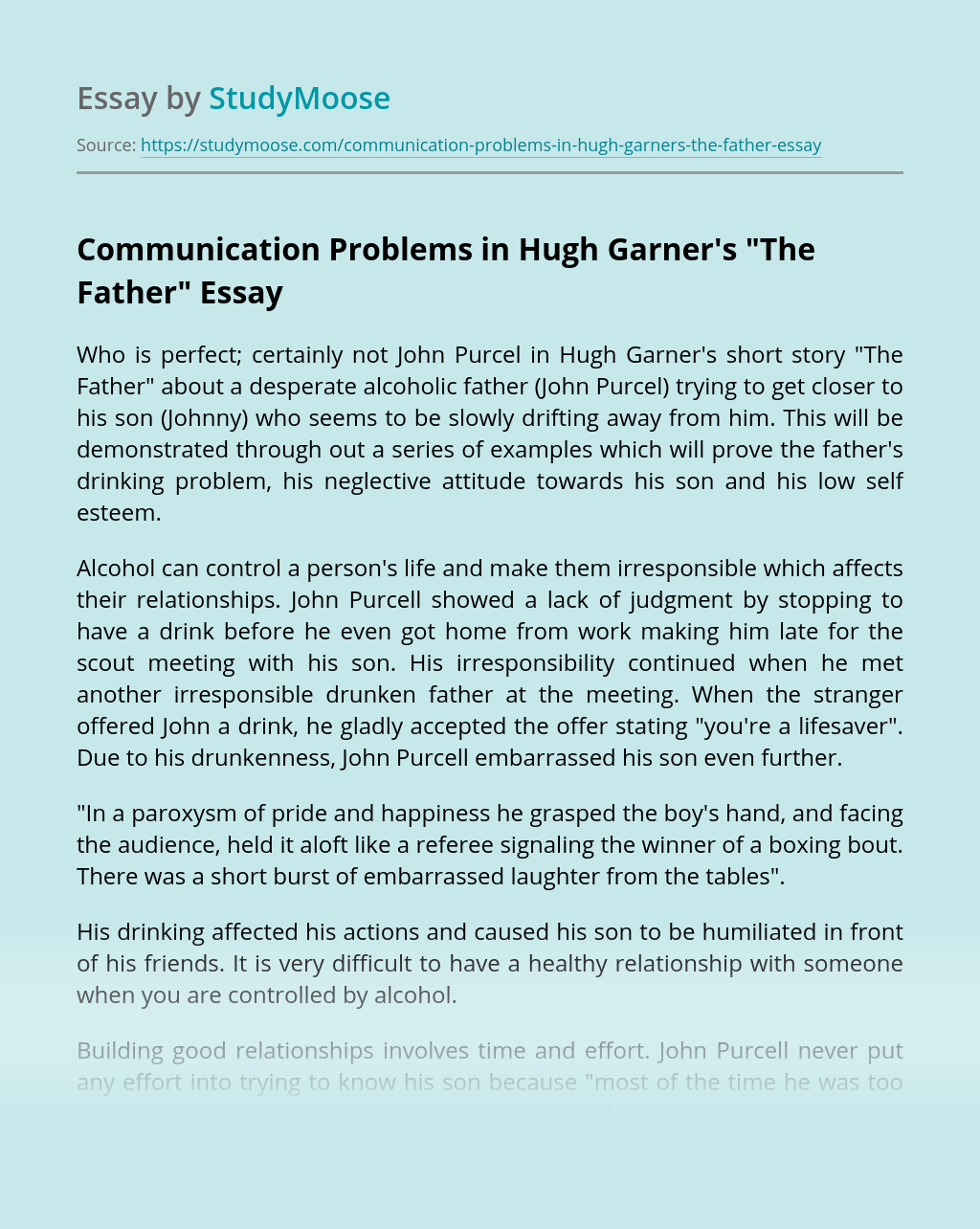 Turn in your highest-quality paper
Get a qualified writer to help you with
“ Communication Problems in Hugh Garner’s “The Father” ”
Get high-quality paper
Helping students since 2015
Stay Safe, Stay Original