By the Waters of Babylon

“Truth is a hard deer to hunt.

Don't use plagiarized sources. Get your custom essay on
“ By the Waters of Babylon ”
Get custom paper
NEW! smart matching with writer

If you eat too much truth at once, you may die of the truth. It was not idly that our fathers forbade the Dead Places.

The truth is a very important thing for an individual. It can be very useful or very destructive depending on how it is used. The significance of the quote made by John’s father could be broken down in to three different sections according to each statement. First of these statements is “Truth is a had deer to hunt.” the second of these statements is “If you eat too much truth at once, you may die of the truth.” and the final statement is “It was not idly that our fathers forbade the Dead Places.”

“Truth is a hard deer to hunt.” The literal meaning of the statement could be interpreted as; the truth is hard to find. Then the question arises, is it hard to find physically or is it hard to grasp mentally? A good example of the physical part of finding the truth was when John went on his journey to the Dead Places. A good example of grasping the truth mentally was when he saw the dead god in the chair, but upon farther examination he realized he was a man rather than a god. The correct interpretation is the second one; the truth is hard to grasp. For example you could tell a person the truth, but until they have been provided evidence or mental reassurance they might not want to believe the truth making it hard to grasp or in the words of John’s father “a hard deer to hunt.”

This leads to the next statement “If you eat too much truth at once, you may die of the truth.” The meaning of this statement is that the truth can be very dangerous. It is also related to the first statement in the sense that once a person grasps and understands the truth, the next stage is how they are going to react to it. If it’s a good thing they might

react positively, but if it’s a bad thing then it’s vice versa. In the case of the John and his people the truth is neither bad nor good rather it is different in the sense that it could be what they want it to be. They could both “eat the truth” and use it to better themselves and their way of life or they could “die of the truth” and use it to cause chaos and destruction as the gods had done. The more likely of the two to occur is the second one. The reason for that is the fact that the truth is against the beliefs of the hill people and when something is against the beliefs or customs of someone they don’t tend to believe it. In this case the hill people would have a hard time believing that the gods they believe in were actually people and will get confused between reality and religion. Also if the hill people learn of the advanced technology that the gods had then they might or might not use it in a productive way and cause destruction upon themselves like the god had.

This leads to the last sentence “It was not idly that our fathers forbade the Dead Places.” This means that their fathers had a reason when they decided to forbid the people from going to the Dead Places. The reason that they had was to protect their people from the unknown and the truth to ensure their well being and safety. The fathers of the hill people did not want the same ending for their people as it had been for the gods or people before them. They knew that if the hill people got the technology or weapons that the gods or people before them had then there would be a great possibility of chaos and destruction. In order for them to protect their people the fathers created rules and customs, but they also left their people in the dark.

Finally, I personally do not agree with this implication because I do not believe in keeping the truth from anyone. I also think that leaders should not keep a truth as big as this one from their people, even though their intentions are to protect society. Keeping thetruth from the people is looking at only one perspective. How did the fathers know that the truth would destroy the people? Knowledge is something a person must share for the betterment of society. Instead of shutting off the past, the fathers should have opened it up to there people and teach their people to learn from the mistakes of the past.

John, a priest and a son of a priest went against his predecessors and learned about the previous civilization and it’s mistakes. This made him understand how to create a civilization that would last. It also makes him a better leader. In the end John thinks, “But they were men who built the city, not gods or demons. They were men. I remember the dead man’s face. They were men who were here before us. We must build again.” This is proof that the implication is wrong and that it creates restrictions upon John’ people. By John thinking like this he will enable his people to move forward, remove the restrictions in their lives, and create a thirst of knowledge that will make his people better rather than worse.

By the Waters of Babylon. (2016, Jul 06). Retrieved from https://studymoose.com/by-the-waters-of-babylon-essay 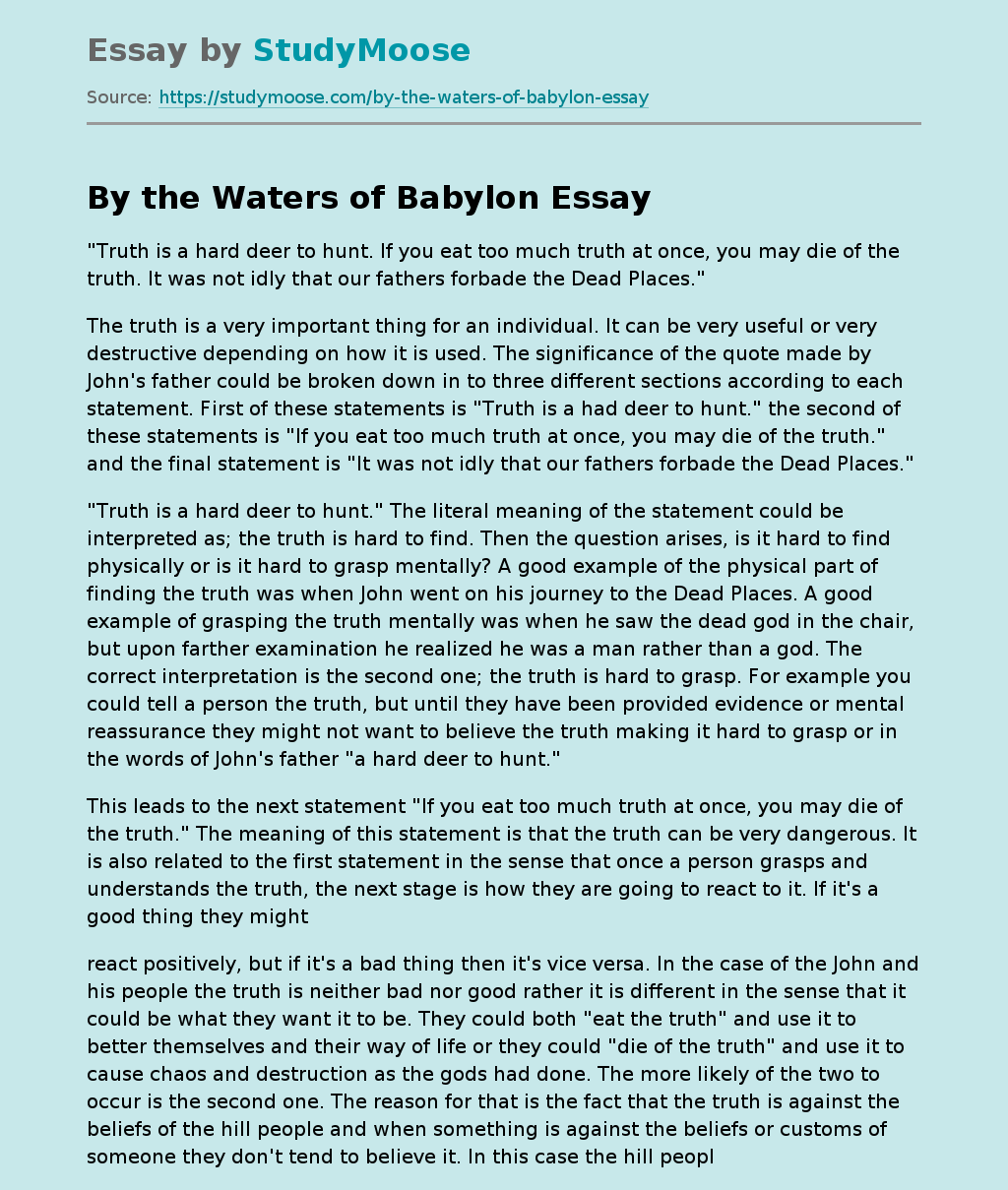