An Analysis of Coming Home Again by Chang Rae Lee

In _Coming home Again_, Chang Rae Lee talks about his relationship with his mother and how the relationship changes as he grows up. Lee talks about his mother’s cooking moments to show the relationship. As Lee describes the moment when he watches his mom “… takes up a butchered short rib in her narrow hand… and with the point of her knife cut so that the bone fell away, though not completely, leaving it connected to the meat by the barest opaque layer of tendon” to prepare Kalbi (Lee).

Don't use plagiarized sources.
Get Your Custom Essay on An Analysis of Coming Home Again by Chang Rae Lee Just from $13,9/Page

Lee uses imagery to an extent where all the situations in the essay give the reader a better feeling of what is occurring. Lee also deeply respects and loves his mother, but the relationship becomes strained when he decides to attend the boarding school.

I believe that Lee wants us to relate our own experiences to his family and tries to teach us from his experiences, as he chooses Exeter and does not spend enough time with his mother. Lee’s story really expresses the idea that people always need to give up something cherishing to gain something valuable, as he says, at the end of the essay, “Sometimes I still think about what she said, about having made a mistake” (Lee).

Similar to Lee, I chose to attend a boarding school in U.S. and to sacrifice the time to spend with my family. When I think about the first time I arrived at U.S., it is still a fresh and unforgettable moment. As the flight attendant broadcast “Tank you for flying with us. Hope you can enjoy the trip. Bye…”, the flight landed on the land of U.S. Looking out the window and feeling the excitement flowed into my heart, I immediately turned to my mom and said “Mom, I will be more mature and self-sufficient after those four years.” Mom did not say anything but nodded her head and then went to the restroom. I did not realize anything at that moment and just kept saying to myself, “Derek, Gott, a make it! Be independent, get more education, and fight for the future!”

Went out of the door of JFK and got on the car to Connecticut, I began the journey in United States. While we were on the way to Connecticut, I was comparing all the different styles buildings with those in China and deeply attracted by the parkways, but I still did not feel the gaze from my parent as they looked at me thoughtfully. As we were getting closer to the school, my father said “son, do not be afraid of anything and get to be stronger.” Myself, however, did not get the meaning of this sentence till I went into the dorm…

At the moment I went into the dorm, the circumstance dumbed me since I had never been to a dorm before and never imagined there would be 10 people using one bathroom and our room did not even have an air conditioner. I stared at the dorm and wanted to ask my parents if I can leave but I suddenly realized that I needed to be responsible for my own decision to study abroad.

It seems like my father knew what I was thinking, and he patted on my shoulder and said to me in an encouraging tone, “Go take a shower and everything will be fine.” He walked me into the bathroom and settled everything for me, which made me feel much better. As I walked into the bath, I started realizing and feeling the worries from my parents, and my eyes suddenly suffused by the tears, which really blanked my head. When I went back to the room, my parents were helping to pack all the stuff and worries were painted on their faces.

Few minutes after we talked in the room, the teacher came and asked my parents to leave, and my mom’s eyes began to be fulfilled by tears. My father immediately gripped my mom’s hands and went out of my room with a sound of “good night”. I was staring at the closing door and the tears were dropping like a shower of pouring rain. My roommate came back after few moments and called me up, but my mind was still blank.

As my parents Skype with me after they got back to the hotel, they said” Son, if you do not feel well or cannot get used to the environment, let us know. Or you can even come back to home…” Tears wanted to come out once again, but I know I need to be more resistant and I said, ” Everything is good. No worries.”

I did not sleep for that night and began to wonder if it is a wise decision for me to study abroad with a cost of spending less time with my family and made them worry about my daily life. After thinking for all night long, I told myself to get good education, to broaden my vision, to be more self-sufficient and to be more mature. On the day my parents left U.S., they sent me a message said, “Just do your best to discover your future.” And I replied, ” I will.”

Now, as I am writing this essay, it also has been the fifth year I studying in U.S., which teaches me how to be resistant and gives me a chance to be more mature; because of this opportunity, similar to Lee, I treasure the memories more than anything and know the significant meaning of the family. Different from Lee, I feel that it has been a great experience to gain more experiences and to be more self-sufficient during the journey in U.S., which is worthy to sacrifice some the valuable time to spend with family, even though I also long to have my mother back. 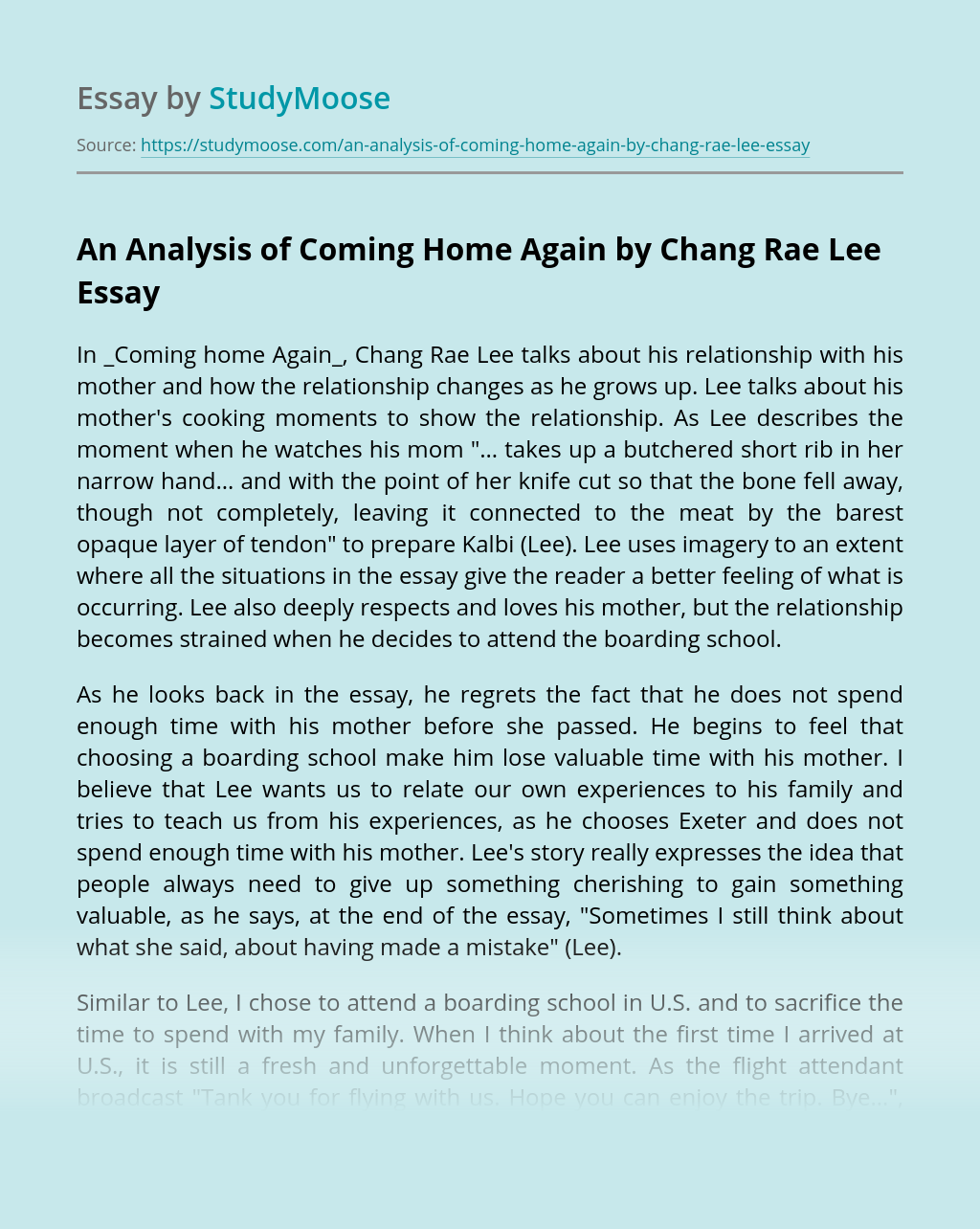 There is no known cause. It is diagnosed when the client has the psychotic symptoms of schizophrenia and meets the criteria for a major affect or mood disorder. The client has depressive disorder (non-specified), generalized anxiety disorder, and has had hallucinations, disorganized thoughts, feels like people are talking about him, and has a flat affect....

The ultimate quest for sport psychologists is to establish what psychological factors produce the winning formula or to try to establish a profile of the successful athlete. Within the psychological framework attempts, to determine the “ideal athletic personality” have only been marginally successful (Morgan 1980, in White, 1993). One of the categories observed in order...

Are you nervous, anxious, irritable or moody? Do you feel depressed or sad and often become frustrated over little things? Are you forgetful due to the fact that you have trouble keeping things straight and thinking clearly? If the answer to these entire questions is yes, then you are in a state of tension or...

View sample
The Crucible- Themes Of Fear, Guilt And Revenge

In life, emotions can act as motivators for courses of action, particularly the feelings of fear, guilt and revenge. Arthur Miller’s play The Crucible shows these themes put to use on a number of occasions. The play’s numerous characters and relationships provide a plethora of examples where the themes are employed. It is through their...

View sample
The Long Drive: Will You Re-Up Next Year? Dbq

The Long Drive: Will You Re-Up Next Year? A cow town is simply a town in which cattle were taken to put on railroads. The only problem is, these towns are located in Kansas, about 1000 miles from Texas, a trip that usually takes up to 3 months. Because of this and water worries, low...