Political pundits will, for years to come, dissect how political neophyte Donald J. Trump defeated Hillary Clinton to become our nation’s 45th president. But, as much as we can put politics aside, it’s clear one decision each campaign made certainly helped the winner and hurt the loser — the slogans.

Don't use plagiarized sources. Get your custom essay on
“ Why ‘Make America Great Again’ Beat ‘Stronger Together’? ”
Get custom paper
NEW! smart matching with writer

Why? There are a number of reasons.

A call to action.

“Make America Great Again” is a call to action. It’s a rallying cry, really, akin to Nike’s “Just Do It.” Not only does it give you a general sense of the themes of the campaign — America isn’t great right now so I’m going to be the one to do something about it — it involves the voters in the mission.

It was almost an order.

“Stronger Together” was designed to be inclusive, but it wasn’t a call to action. Yes, people are stronger when they are united, but the slogan seemed like a suggestion to tie all the lifeboats together and ration out the remaining hardtack and water. The electorate — notable traditional working-class Democrat voters in Pennsylvania, Michigan and Wisconsin — was more interested in finding the captain’s lifeboat and sinking it.

Want to know how you can tell a great slogan? Put it on a bumper sticker and see if people have a visceral reaction to it. Better yet, put it on an ugly red baseball cap, with no logo and see if that works. It did. There was really no thinking involved. If you felt America was no longer great and you wanted it to be great again, you found your candidate just by looking at his baseball cap.

There was a lot of complexity to “Stronger Together.” It hinted that the country needed strength, but didn’t go all the way down the path of actually criticizing the current administration, which Hillary Clinton couldn’t do because she was actually a part of it for several years. Also, “together” was meant to be an inclusive word but it failed with the voters, mostly — and most ironically — because it was considered exclusive. It reflected a kind of political correctness that some voters were actively rejecting and others were intimidated by. Or, as New York Times columnist , that message of mandatory inclusiveness became “a handmaiden to smugness and sanctimony, undermining its own goals.”

When you saw Donald Trump campaign, you saw “Make America Great Again” everywhere. It was on the podium. It was on the signs the crowds held. It was on his hat. There was no other rallying message. Yes, after he was nominated, “Lock her up!” became a frequent chant at his rallies, but Trump was never conducting that orchestra. Yes, he may have agreed with it (although his sentiments since the election on that and other issues have softened), but he was smart enough to know he didn’t want to send mixed messages from the podium.

The Clinton campaign was never so definitive in its messaging. Before “Stronger Together,” there was “I’m With Her,” and “Fighting for Us” and “Breaking Down Barriers.” That search for a slogan reflected a lack of a theme for the campaign. As David Axelrod, the former advisor to President Obama, , “She, I think, was struggling in the Democratic primaries to identify a message and a tag line that summed up the purpose of her campaign.”

In that same NPR piece, Democrats noted that “Stronger Together” was a reaction to “Make America Great Again.” More specifically, Trump started saying that he “alone” could fix it.

“Yes, those were actually Donald Trump’s words in Cleveland and they should set off alarm bells for all of us,” Clinton said during the Democratic National Convention. “He’s forgetting every last one of us. Americans don’t say ‘I alone can fix it.’ We say, ‘we’ll fix it together.'”

Well… no. Actually, as an entrepreneurial audience knows well, a lot of problems are fixed by individuals. At least, there are a lot problems that are solved by individual ideas. So not only was Clinton immediately on the defensive with the slogan, she was doubling down with a supporting message that (once again) ignored the philosophy and experience of a whole swath of the voting public.

Here’s the unkindest cut for Hillary Clinton. “Stronger Together” was so much weaker on social media than “I’m With Her.” The electorate is always looking to be energized by a candidate, even in years like this when the two people running for the most powerful job on the planet had historically high disapproval numbers. #ImWithHer was a social star, as supporters enthusiastically tweeted and used the tag on Facebook and Twitter. #StrongerTogether never reflected that voter enthusiasm.

The hashtag battle was the one fight in the war that Hillary Clinton could have won, because “Make America Great Again” was not a great social slogan. It was shortened to #MAGA, and that had a kind of foreign feel to it. Still, it worked better than #StrongerTogether because Trump supporters were using #MAGA organically while Clinton supporters were using a slogan the campaign had abandoned. That alone should have shown the voter disconnect that reflected poorly for Hillary Clinton at the ballot box. 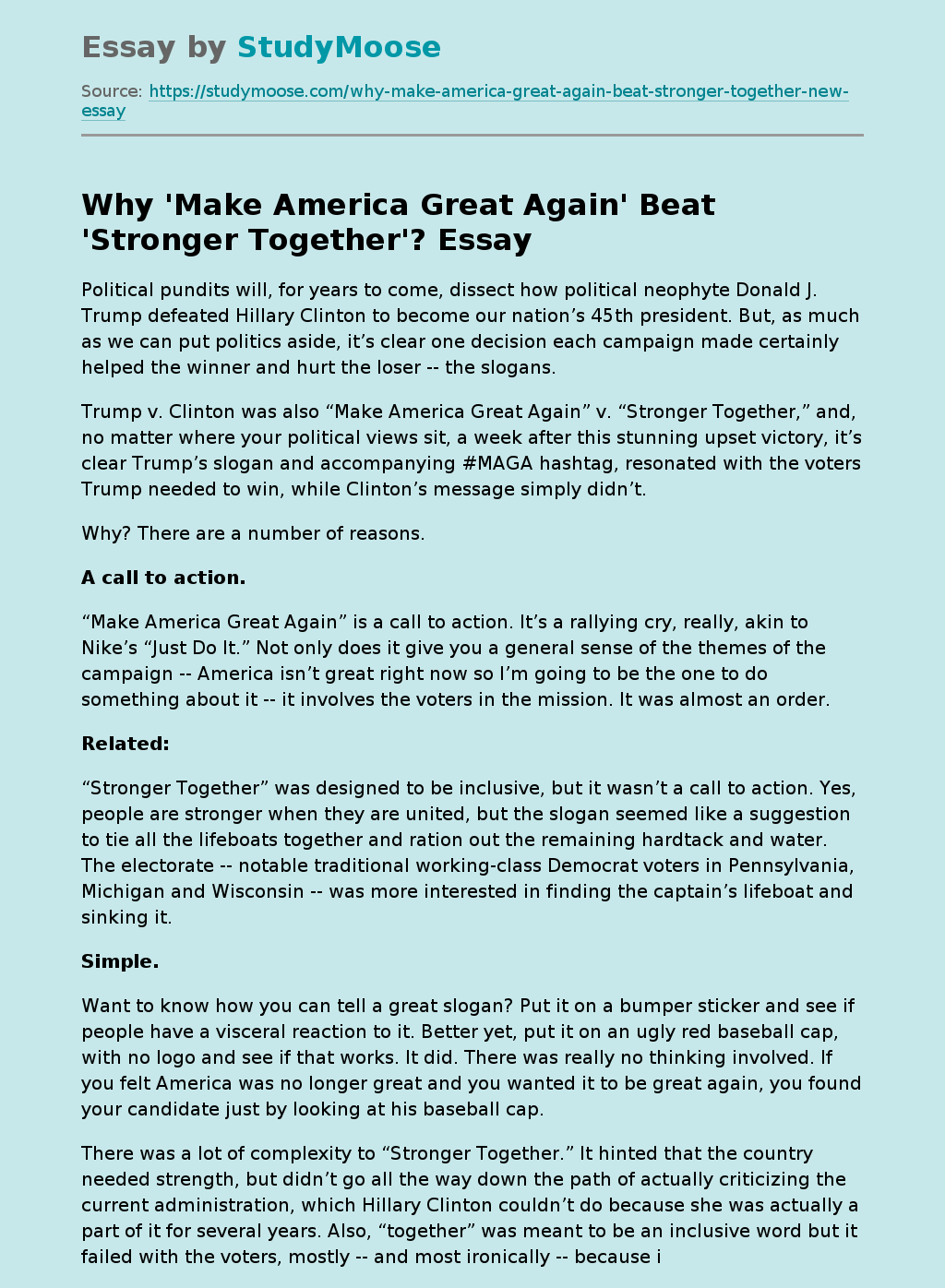