How does music affect your heart beat?

The heart is a vital organ in the human body. Though only the size of the fist, it pumps blood to the rest of the body by rhythmic expansion and relaxation. The frequency of this cardiac cycle is measured by the term heart rate. The heart rate is the number of contractions (beats) of the heart in a minute. The heart rate tends to increase with response to a wide variety of conditions like vigorous physical activity or according to our hypothesis, music.

Don't use plagiarized sources. Get your custom essay on
“ How does music affect your heart beat? ”
Get custom paper
NEW! smart matching with writer

Music has an arousal effect which is related to its frequency and tempo. Slow or meditative music can induce a relaxing effect and thus put the psychological sense in rest. Music may be used as an alternative technique of relaxation or meditation.

When the music was paused, ventilation, heart rate, and blood pressure decreased, sometimes below the beginning rate. Slower music caused declines in heart rate, with raga music influencing the largest decline. Overall, researchers agreed that the style of music wasn’t as important as its pace.

Music has also been shown to reduce stress, benefit athletic performance, and enhance motor function in people with neurological impairments. So turn up the volume and chill out.

Listening to music can influence your heart rate and how fast you breathe – especially if you’re a trained musician, a new study indicates.

Listening to faster music with a more upbeat tempo has the opposite effect – speeding up respiration and heart rate.

The results support a growing body of research on the potential stress-reducing health benefits of music, the researchers say.

In the current study, Sleight and colleagues monitored breathing rate, blood pressure and other heart and respiratory indexes in 24 healthy young men and women, before and while listening to short excerpts of different kinds of music.

The music ranged from slow and fast classical compositions of differing complexities to rap.

They also monitored the subjects during two minute musical intermissions.

Half of the subjects were trained musicians and the other half had no musical training.

The investigators report that listening to music initially produces varying levels of arousal – accelerated breathing, increased blood pressure and heart rate – that are directly proportional to the tempo of the music and perhaps the complexity of the rhythm.

The style of the music or an individual’s music preference appears less important than the tempo of the music.

They also found that calm is induced by slower rhythms and by short pauses or intermissions in the music.

Pausing the music for two minutes actually induces a condition of relaxation greater than that observed before subjects began listening to the music tracks, the investigators report.

Sleight suggests these effects are most striking for people who have musical training because they have learned to synchronise their breathing with the musical segments.

“Musicians breathe faster with faster tempi, and had slower baseline breathing rates than non-musicians,” he says.

The researchers speculate that music may give pleasure, and perhaps health benefits, because it induces a controlled alteration between arousal and relaxation.

They say the present study suggests that an appropriate selection of music – alternating fast and slower rhythms interspersed with pauses – can be used to induce relaxation and may therefore be beneficial in heart disease and stroke.

References: above background information obtained from:Reader’s Digest December 2006Specific Research DesignWe will be measuring the heart rates of each subject to determine the effect of music on cardiovascular activity. In order to do this, we first must measure, using a heart rate monitor, the resting heart rate of the subject, as the control.

Hypothesis: I believe – from research, that either house or rock will get the heart rate going the most.

Apparatus:Heart-rate Monitor: This object is usually a strap attached to the person’s chest with electrodes in contact with skin, which detects the hearts voltages. Once these are detected, they are then sent to the receiver through radio signals, which is usually around the wrist. The receiver uses these findings to determine the subject’s heart rate.

iPod: This device will be used to expose the subject to the 7 different pieces of music throughout the experiment and at the same volume at 2mins each song.

The Human: The people tested are all between the ages of 18-23 and similar physique to keep a somewhat constant. We are also taking into account their favourite type of music based off of the seven choices we give them to see if this affects the way they react to the stimulus of the music. We are also considering their physical condition, for this will influence the heart’s activity.

Method:Step 1. The volunteer was allowed to rest for 1 minute while seated.

Step 3. The first music track was played using a CD player. When the track was completed, the volunteer’s heart rate was recorded.

Step 4. The volunteer’s heart rate was recorded after playing each of the 7 music tracks. The music tracks were played consecutively, in the same order for each volunteer as follows:a) Acoustic: No Other Way by Jack Johnsonb) Blues/Jazz: Georgia On My Mind by Ray Charlesc) Classical: Leave No Man Behind by Hans Zimmerd) House/Electronica: La Musique by Riot In Belgiume) Hip-Hop: Don’t Matter by Akonf) R&B: Stronger by Kanye Westg) Rock: Start Me Up by the Rolling StonesVariables:Controlled: Ipod, volume, songs, heart rate monitor, time of music play, volunteer’s age bracket and gender.

Dependent: Heart rate of volunteers measured in beats per minute.

This shows that the tempo is like the human heart and how it beats.

How does music affect your heart beat?. (2016, Jul 29). Retrieved from https://studymoose.com/how-does-music-affect-your-heart-beat-essay 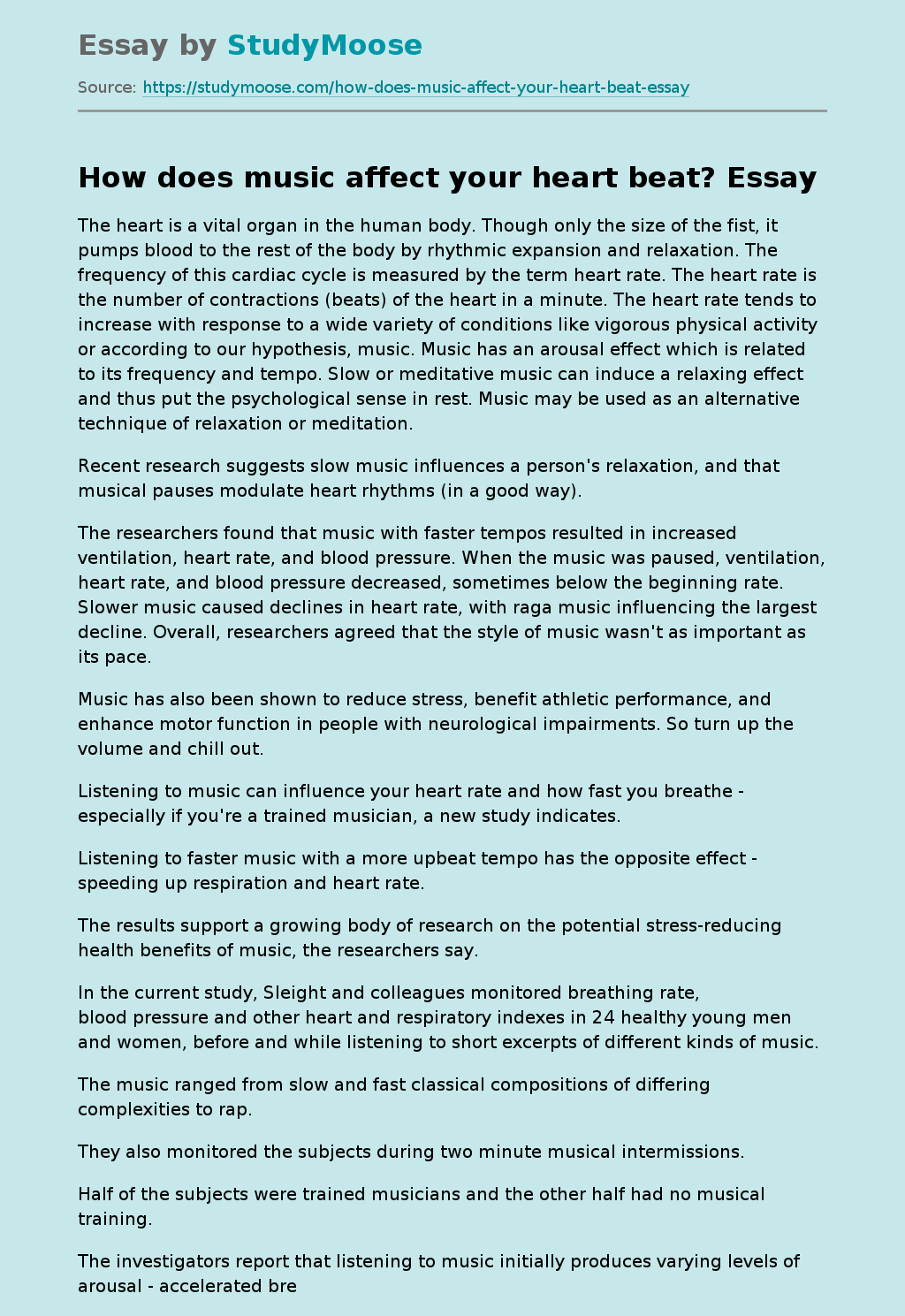