This experiment will attempt to determine if the temperature that popcorn kernels are stored at will affect the amount of un-popped kernels when using a hot air popcorn popper. Popcorn kernels contain moisture inside of them which, when heated, turns to steam and expands that in turn causes the kernel to explode. Popcorn.org states that loss of moisture content can cause less yield amounts when popping popcorn (popcorn.org, 2014).

Popcorn is a favorite snack for many. There have been many experiments done on popcorn to determine best brands, best popping method and best way to yield the most popped kernels among others.

Don't use plagiarized sources. Get your custom essay on
“ Does Temperature of Kernels Affect Popcorn Yield? ”
Get custom paper
NEW! smart matching with writer

Larano compared popping results with kernels stored at different temperatures. She reported that kernels stored in the refrigerator or freezer had more un-popped kernels than those that were stored at room temperature (Larano, 2002). Boyd tested two different brands of microwave popcorn to determine which produced the least amount of un-popped kernels. While Boyd tested by popping popcorn in the microwave and using two different brands of popcorn, he did state two explanations for why popcorn kernels don’t pop.

One is that there is an insufficient amount of moisture in the kernel and the other that there is a crack in the hull that allows steam to escape before building up enough pressure to cause the kernel to explode (Boyd, n.d.). This experiment will focus on the difference in storing kernels at room temperature and in the freezer on the amount of un-popped kernels produced with a hot air popper.

Using popcorn kernels from a store brand bag of popcorn kernels (all kernels should come from the same bag): Using baggies (or jars or bowels or some similar container), make six separate groups containing 300 kernels each Place three of the groups in a freezer and leave the other three on the counter or in a cabinet at room temperature

Allow the groups to set for at least 24 hours

Running the air popper for two minutes before starting the experiment should allow the popper to be at a relatively constant temperature for each group. Alternating the type of group as the experiment is performed should prevent the results from being skewed due to the popper being hotter or cooler for one group type at the beginning or end of the experiment. Sequence of Events

The graph above shows that, on average, there were more un-popped kernels for groups stored in the freezer versus groups stored at room temperature.

Experimental Design as a Key Factor

The design of an experiment will establish whether the results will be consistent in their quality. If more than one independent variable is present in an experiment, the causes of any variations in measurements will be indeterminable. Results must be able to be measured in a reliable way in order to determine if the independent variable is the cause of the variation in measurement. Having good controls on all variables will prevent outside factors from interfering with the results. Without good controls the results of the experiment will be unverifiable.

To replicate this experiment, the groups must be stored in their storage location for at least 24 hours prior to the actual experiment taking place. Each group must have the same number of popcorn kernels to start out with. It is also important that each group be heated in the same heating unit and for the same amount of time.

Does Temperature of Kernels Affect Popcorn Yield?. (2016, May 20). Retrieved from https://studymoose.com/does-temperature-of-kernels-affect-popcorn-yield-essay 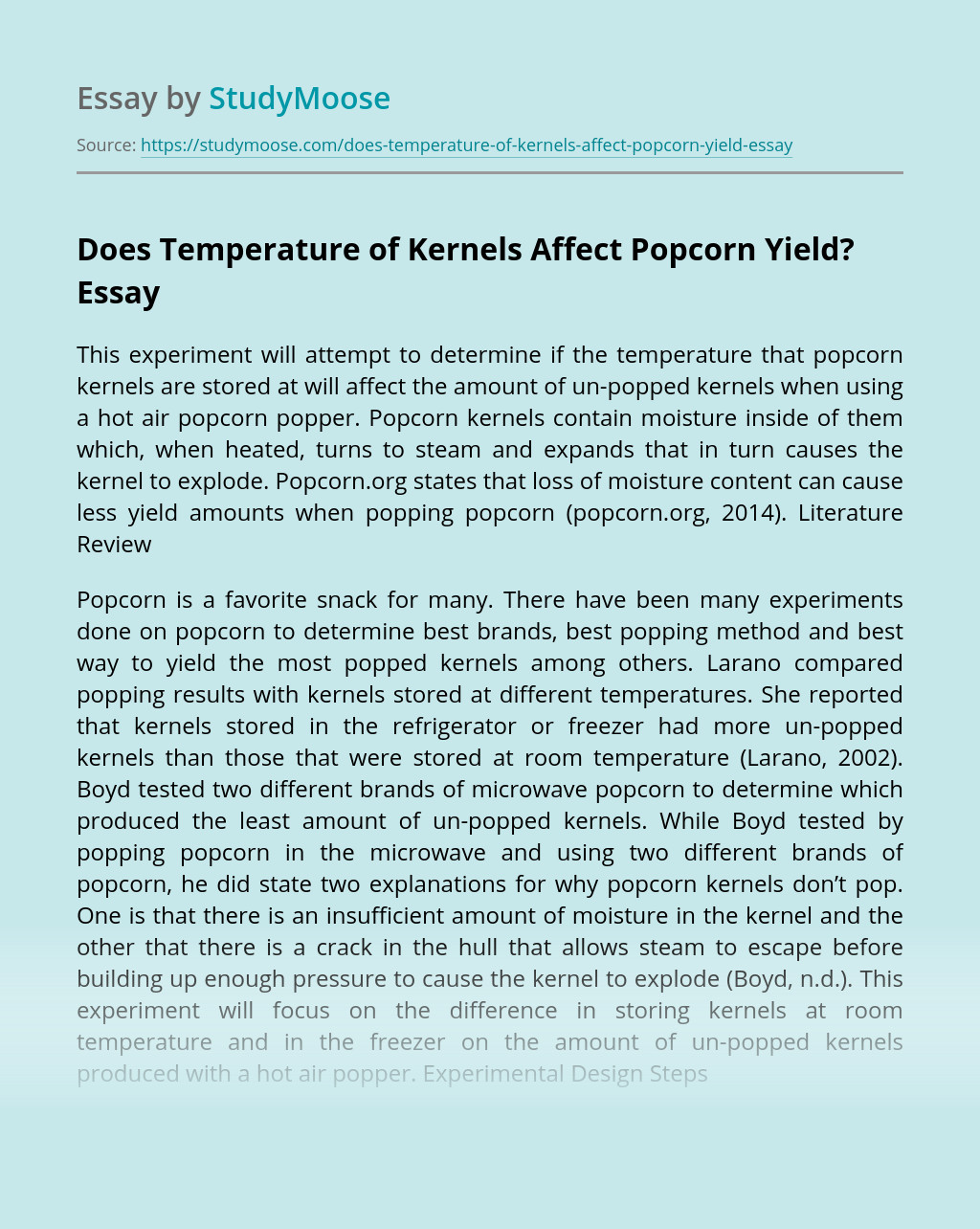