How Does Culture Affect Meaning and Communication?

Nowadays we live in what is considered a “global village”, over time we have collectively worked towards this end. The need and desire to create a closer global community is not only seen as a technological advantage but an economic benefit. The world as we know it gets smaller every day, thanks to a new generation of social media applications such as facebook or twitter, which links vast communities together; communities and cultures are no longer cut off or remote.

Take facebook for example, it has over 1 billion users, if it were a country it would be the third largest by population.

Don't use plagiarized sources. Get your custom essay on
“ How Does Culture Affect Meaning and Communication? ”
Get custom paper
NEW! smart matching with writer

(www.imf.org/external/np/speeches/2013/012313.htm) Whether you live and work in remote Antarctica or bustling Hong Kong, technology and the studies of inter-culture communication ensures that people, governments and organizations can work effectively together in a harmonious and beneficial way. Naturally, this is an ideal situation, but as experience tells us, nothing is ever as simple.

This essay explores how cultural differences effect meaning and communication.

In doing so it will look at the definition of culture, what it is, and how it affects meaning. Furthermore, it will look at the acclaimed Dutch researcher, Geert Hofstede’s four dimensions of corporate culture as a framework to define and categorize cultural differences. Finally, it will raise potential problems raised in the field of inter-cultural communications and provide suggestions to overcome them.

What is culture? Currently there are over “7 billion human inhabitants living on this planet. Each of these earth dwellers comes from a specific culture.

(geography.about.com/od/obtainpopulationdata/a/worldpopulation.htm) As the world becomes smaller, not physically, but by the use of new media and technology, as they traverse earth looking for new or better opportunities, so must they face the modern conundrum of understanding firstly, what is culture, and secondly, how the differences between cultures effect meaning and communications.

Without an understanding of different cultures, the potential for misunderstanding is high, with the ever-present possibility of a breakdown in relationships and opportunities. (Dostine, 2008, pg 58) text book suggests that all humans can be broadly defined by our culture. In essence, we are all born into a culture that over time has been passed down from previous generations, bestowing a rich history, significant culture defining traits such as its religion, its values and ethics, its ceremonies, rites and rituals, languages, customs, laws and business practices. Moreover, verbal and non-verbal communications practices that differ from one culture to the next. Therefore, suffice to say that the more we know about each other’s cultures the more effective our communication and co-habitation of the planet will be.

How does cultural effect meaning? At the best of times, communication between individuals can be somewhat challenging. Add to that mix, communicating with people from another cultures and suddenly, the propensity for misunderstanding and in some cases offence can very easily take place as a result of the differences between the cultural backgrounds, understanding and meaning between the sender and receiver can be in stark contrast. This can be due to the increase in variables in the communication mix, therefore making global interaction more complex. Furthermore, people’s perception or way of thinking, hearing or seeing can vary quite extensively from one culture to the next.

It could be strongly argued that it would be highly advantageous for both parties to be aware of the differences and therefore the potential for problems that arise from inter-cultural communication. Nowadays, many multi-national organizations, governments and educators have training and education programs in place. They see the importance in creating a clear, concise and respectful flow of communications between cultures. An example of this could be the department of foreign affairs and trade (DFAT) in Canberra.

One of its main functions is to liaise internally and externally to better position itself to and for greater opportunity. It would be highly likely that the department has educated its employees in the science of how to deal effectively with other cultures (governments, organizations, businesses). One of DFATs main objectives is to “work with other government agencies to ensure that Australia’s pursuit of its global, regional and bilateral interests is coordinated effectively”. (dfat.gov.au/dept/what-we-do.html) In the field of organizational cultural studies, a Dutch researcher known as Geert Hofstede went on to publish his highly regarded findings. These findings have become a highly influential and acceptable way in which modern organizations can asses the difference between national culture and organizational culture. Hostede, seen as a pioneer in area of corporate culture, created a framework in which to asses national cultural groups and how they may affect or influence behaviors within an organization.

Hofstede’s research in the 1980s, included the survey and analysis of hundreds of thousands of employees across fifty countries, to further increase the validity of his findings he followed up several years later by re-surveying these workers.

In his work Hofstede asserted that the values that differentiated counties from each other fell into four dissimilar categories or clusters. Through the process of his study in corporate culture, Hofstede’s created a framework whereby he classified culture into four different dimensions. These dimensions looked at four anthropological problem areas that societies tend to handle differently to one another. Such as, ways in which they cope with inequality, uncertainty, the relationship between the individual and their primary group and implication of the persons sex. Born from this was Hofsted’s four dimensions of national culture. They become knows as Power Distance, Uncertainty Avoidance, Individualism versus Collectivism, and Masculinity versus Femininity. (www.geerthofstede.nl/dimensions-of-national-cultures)

In discussing the Four Dimensions of Culture, Hofstede claims that: Power Distance Power distance is the extent to which the less powerful members of organizations and institutions (like the family) accept and expect that power is distributed unequally. This represents inequality (more versus less), but defined from below, not from above. It suggests that a society’s level of inequality is endorsed by the followers as much as by the leaders. Power and inequality, of course, are extremely fundamental facts of any society and anybody with some international experience will be aware that “all societies are unequal, but some are more unequal than others”. Uncertainty Avoidance

Uncertainty avoidance deals with a society’s tolerance for uncertainty and ambiguity. It indicates to what extent a culture programs its members to feel either uncomfortable or comfortable in unstructured situations. Unstructured situations are novel, unknown, surprising, and different from usual. Uncertainty avoiding cultures try to minimize the possibility of such situations by strict laws and rules, safety and security measures, and on the philosophical and religious level by a belief in absolute Truth: “there can only be one Truth and we have it”. People in uncertainty avoiding countries are also more emotional, and motivated by inner nervous energy. The opposite type, uncertainty accepting cultures, are more tolerant of opinions different from what they are used to; they try to have as few rules as possible, and on the philosophical and religious level they are relativist and allow many currents to flow side by side. People within these cultures are more phlegmatic and contemplative, and not expected by their environment to express emotions. Individualism

Individualism on the one side versus its opposite, collectivism is the degree to which individuals are integrated into groups. On the individualist side, we find societies in which the ties between individuals are loose: everyone is expected to look after her/himself and her/his immediate family. On the collectivist side, we find societies in which people from birth onwards are integrated into strong, cohesive in-groups, often extended families (with uncles, aunts and grandparents) that continue protecting them in exchange for unquestioning loyalty. The word collectivism in this sense has no political meaning: it refers to the group, not to the state. Again, the issue addressed by this dimension is an extremely fundamental one, regarding all societies in the world. Masculinity

Masculinity versus its opposite, femininity refers to the distribution of emotional roles between the genders which is another fundamental issue for any society to which a range of solutions are found. The IBM studies revealed that (a) women’s values differ less among societies than men’s values; (b) men’s values from one country to another contain a dimension from very assertive and competitive and maximally different from women’s values on the one side, to modest and caring and similar to women’s values on the other. The assertive pole has been called masculine and the modest, caring pole feminine. The women in feminine countries have the same modest, caring values as the men; in the masculine countries they are more assertive and more competitive, but not as much as the men, so that these countries show a gap between men’s values and women’s values. (www.geerthofstede.nl/dimensions-of-national-cultures)

Whilst Hofsted’s four dimensions are highly regarded, further research has highlighted other areas that effect intercultural communication and understanding. These include context, language and non-verbal communications.

Firstly, it is almost impossible to investigate research into the cross-cultural issues without making mention of Edward Hall’s research in the area; he asserted that cultures are defined by context. (Hansen & Lee, pg,30) A person’s behavior can be affected by its cultural context. (Dostine, 2008) From here, he broke context down into low context cultures; these prefer direct verbal interaction with minimal regard to context. Examples include Australia, USA, Germany, Switzerland, and Scandinavian cultures.

How Does Culture Affect Meaning and Communication?. (2016, Nov 17). Retrieved from http://studymoose.com/how-does-culture-affect-meaning-and-communication-essay 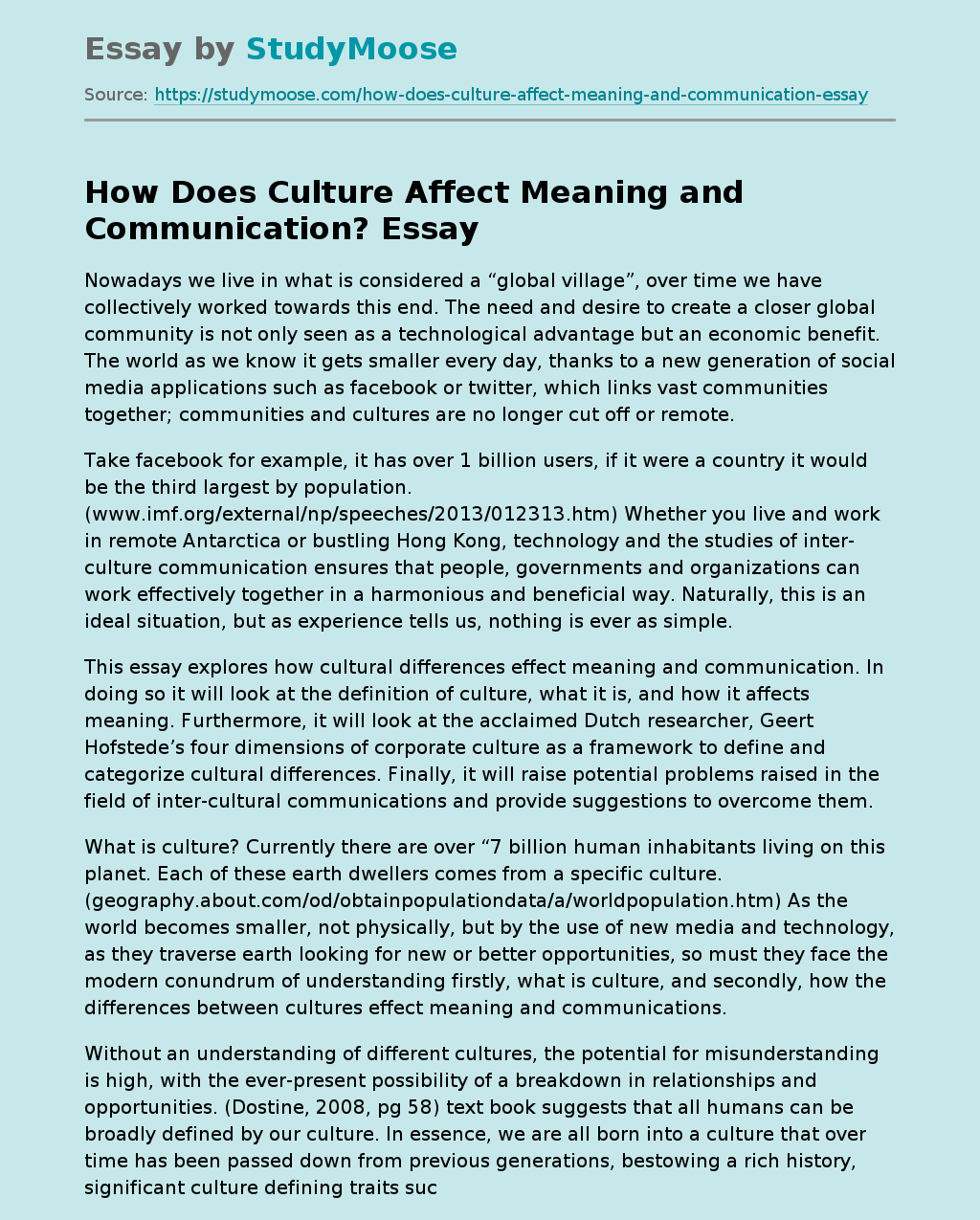