Communication one of life’s biggest assets yet also one of life’s greatest issues. Everyone uses communication – everyone in every walk of life, in every country, everywhere. There is no way around it. We depend on communication for nearly everything. “Communication is the vehicle by which meanings are conveyed, identity is composed and reinforced, and feelings are expressed. As we communicate using different cultural habits and meaning systems, both conflict and harmony are possible outcomes of any interaction” (LeBaron, 2003). Proper communication is one of the keys to success.

Don't use plagiarized sources.
Get Your Custom Essay on Communication: The Culture Affect Just from $13,9/Page

One would think that given its importance, communication would be held in higher regard and more effort would be put forth in communicating correctly. Mary Guffey and Dana Lowey discuss the five key elements of culture in their book, Essentials of Business Communication, to help improve our understanding of cultural communication. Those five elements are as follows: context, individualism, formality, communication style, and time orientation. Guffey and Lowey say that “context is one the most important cultural dimensions, yet it is among the most difficult to define”.

They avoid confrontation and emotion in business transactions. They value position and status over competency. They may not take words literally. (Guffey & Loewy, 2010) It is easy to see why context is important to our communication. If these differences were understood or at the very least known about before communication begins, misunderstandings and offenses can be avoided. “An attitude of independence and freedom from control characterizes individualism” (Guffey & Loewy, 2010). Low-context cultures, such as Americans, generally value individualism, while high-context cultures tend to be more collectivist.

Individualism represents independence, self-assertion, initiative, competence, and personal achievement. Collectivism represents a more group-oriented mindset. Their identity is found in the group, rather than themselves as an individual. Then you have some cultures that cannot be characterized as either individual or group oriented primarily. (Guffey & Loewy, 2010) When communicating to these different groups, it is important to highlight the ideals that they value. Formality is another element. Some cultures hold tradition, ceremony, and social rules in high regard, while others do not.

Americans, generally informal, can be quite offensive to more formal cultures. For example, Americans are friendly to most and develop friendships easily. We share information and are “comfortable” with authorities (teachers, bosses, etc. ) in our lives. We also address people by their first names, something that is not done by formal cultures. Titles are heavily used in formal cultures and names are reserved for only close friends and family. The Western, informal, culture is more relaxed about social status and position of power.

Formal cultures hold authority figures in very high regard. In Egypt, Turkey, and Japan students stand when their teacher enters the room and bows to them when they pass them on the street. (Samovar, Porter & McDaniel, 2010) So again, when communicating with a group or culture that is different from you, especially communication from an informal culture to a formal culture, it is vital to know the culture and mold your communication appropriately. Communication style is another important element that cultures approach differently. For example, “to

The Japanese, or high-context culture, tend to drag out negotiations because they have realized others cultures concede over time. They are often quite and meticulous in negotiations. Realizing the differences in communication styles will be of tremendous asset to one’s business dealings. The fifth element that separates cultures is time orientation. Americans view time as an important commodity. They value productivity and efficiency. They see time as money. They, as a general rule, do not keep people waiting for business meetings.

For one, that would not be a good business practice and two, that would be exceptionally rude. While this is true for American cultures, there are many other cultures that do not look at time the same way at all. Hispanic or Caribbean cultures have a far more relaxed view of time. They, generally, are not in a hurry. According to Guffey and Lowey, ” the perception of time and how it is used are culturally learned”. Having an understanding of how a culture uses their time becomes important as you begin to have dealings with them.

Each culture has its view on these different elements; each culture communicates differently, each culture values differently, and so on. It is important to realize these differences and learn to adapt to the culture in which you are currently dealing. Adapting to a particular culture could possibly be there difference in making or breaking a deal. Life, as a whole, is about compromise and balance. Communication is simply another element of compromise. As stated earlier, communication can be one of life’s biggest assets or one of life’s greatest issues. Words and actions must be chosen wisely to communicate effectively. 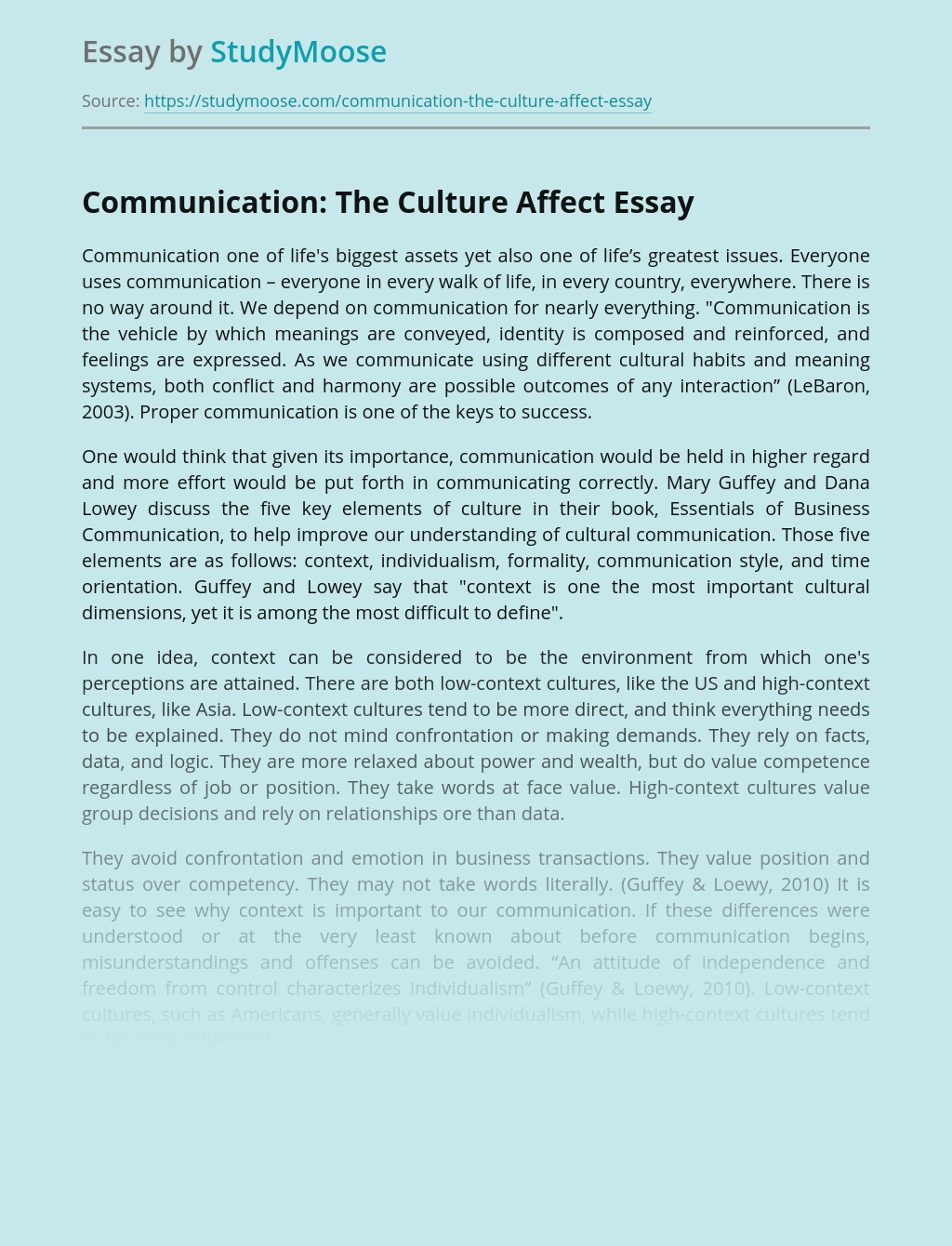 Reflection Paper “Language Barrier” Communication traditionally plays an extremely important part in the life of people. Nowadays, the importance of effective communication has increase consistently due to the progress of technologies and rapid development of international cooperation. The issue of language barriers is particularly critical during intercultural service encounters. Intercultural service encounters, where the customer...

It exhibits itself when team members always want to protect and defend own interests. There is no openness and communication is always argumentative with team members trying to outdo each other as regards explaining why they are right and their colleagues wrong (Peter, 1988). Different expectations: Divergent views on individual roles and responsibilities and authority...

Get Essay
Linear and Circular Model of Communication

“Any act by which one person gives to or receives from another person, information about that person’s needs, desires, perceptions, knowledge, or affective states. Communication may be intentional or unintentional, may involve conventional or unconventional signals, may take linguistic or nonlinguistic forms, and may occur through spoken or other modes.” In light of the above...

Listening Skill is a neglected Art

Communication Problems in the Philippines

Introduction English has been one of the main languages used here in the Philippines for a long time now, since the American Regime. Although Tagalog, Cebuano, Ilocano, Hiligaynon, Biko and Waray are the main local languages, while Filipino is the indigenous national language, English remains an important official language (Platt, Weber, Lian 20). It is...