Deaf Again is the story of Mark Drolsbaugh, and was written to show the world a deaf perspective, of how they live, struggle on a daily basis. Deaf Again is about Mark Drolsbaugh journey from being born hearing, to becoming hard of hearing during the first grade, and the difficulties of being forced into the mainstream and not knowing of the joys of the deaf community and deaf culture until he is in his twenties.

Mark starts his story by talking about his mother’s natural birth.

He was born in Pennsylvania to his deaf parents Don and Sherry Drolsbaugh. Mark was born able to hear and learned to talk and know a little how to sign because of his parents. This all changed when he was in first grade. Mark began to experience significant hearing loss. His grandparents were informed and Mark was taken to different doctors, audiologists, and speech pathologists to try to fix his deafness. Since Mark was not completely deaf, his grandparents held on tightly to what hearing and speech their grandson had left and to find ways to improve it.

All the negativity that Mark dealt with towards being deaf, made him also feel negative towards his deafness. His Grandparents believed the way to improve Mark’s hearing was for him to keep attending school with children who could hear, because if he were to go to a school that would sign and help him accept his deafness it would “ruin” Mark’s chance at being able to be “fixed”.

School was difficult for Mark because his classrooms contained more than twenty students and the information he had to learn would only go over his head. Mark would wear hearing aids, and because of this he was also ridiculed and made fun, because he was different. Mark would get into fights and have report cards saying that his behavior could be improved. Mark’s grandparents made a smart move and had Mark transfer to Plymouth Meeting Friends School, PMFS for short. It was a small school with two teachers and eight kids to each classroom. Mark began the third grade at PMFS with welcoming children, making him feel comfortable. Mark not only would have a challenge with his deafness, but religion as well. Mark’s family was Jewish and would have problems when celebrations would come around.

To relieve stress from school and his family, Mark would play baseball with the children in his neighborhood. The problem was not playing baseball, it was his friend Sekou. Sekou was African American; during this era there was extreme racial discrimination. Sekou’s family was proud of their culture, while Mark wished his family had some pride with Mark being deaf. When it was time for Mark to shift to high school, his grandparent had him attend Germantown Friends School. Germantown Friends School was one of the best schools in Philadelphia, but the problem was that the school was much larger and the curriculum was known to be tough. Mark persevered and began attending the high school even though he would be the first student who was deaf at that school. At first the transition was very difficult because of Mark not knowing what was going on in the classroom and for a long time he was unable to catch up until he had an interpreter named Emily come to help.

Despite his difficulties connecting to other students, Mark made many friends from joining the baseball team at GFS. Unfortunately, throughout his high school years Mark still felt inferior trying to fit into the hearing world. Mark knew he needed help and depended on his friends when they would go to parties he needed his friends to explain what was going on and as more people joined the conversation it became clear to Mark that it was pointless to ask “what did they say” etc. there were too many people for him to keep up with. He knew he didn’t belong and even though he tried, he knew people would always view him as different. Soon Mark graduated and he struggled with what he was going to do for the next chapter of his life. He took a job working at a supermarket and was satisfied with just that until a woman named Linda Baine offered him a position at PSD as a dorm supervisor. Working at PSD, Mark began to learn about deaf culture and the deaf community.

With the shutting down of the dorms because of the small amount of students living in them, Mark was out of a job. Linda had encouraged him to attend Gallaudet University, a university for the deaf. Soon Mark transferred from Temple University to Gallaudet and moved to the university’s location, Washington D.C. Mark had never really had many friends who were deaf or was a part of deaf culture, but at Gallaudet, all that changed when he met fellow students who were just like him. He learned that he no longer had to try to fit in with the hearing world; he had finally found people who he could communicate fully and have meaningful conversations with people who saw him as their equal. At Gallaudet, Mark also learned leadership skills and he learned to have the courage to speak up for himself. In hearing schools, Mark was unable to provide any input or offer discussion when it came to group projects because of the language barrier.

But now since all his peers know sign language, he is able to express his opinion and lead when it came to schoolwork. It was there where Mark met his future wife, Melanie McPhee. Mark and Melanie would later get married and then graduate and both were successful in obtaining jobs within their community. Mark and Melanie have three kids together that are all hearing. Their children learned ASL as well as spoken language and are thus bilingual. Mark had a main argument throughout the book that he would bring up a lot; to teach deaf children ASL at a very early age. Instead of trying to force deaf children to speak spoken language, to teach them ASL because it is at these early years in a child’s life that language development be implemented in order for the child to not fall behind in school. The problem most parents are doing is not teaching their deaf children any language so when they enter school, they are far behind.

Parent who do this are actually causing harm to the children cause now they believe they are not good enough and will live their life less than what they are. I agree with Mark because language is very important because in our society, we are constantly communicating and if a child does not learn this, they suffer greatly mentally and emotionally. Most professionals (and hearing parents of deaf children) see deafness as a disability, something that needs to be cured or fixed. When children see this attitude that their parents are against signing, the child picks that up and feels the same way that it is wrong to be deaf it is wrong to sign, and their self-esteem suffers. The other problem is that most deaf children that are born into hearing families don’t become a part of deaf culture and the deaf community. 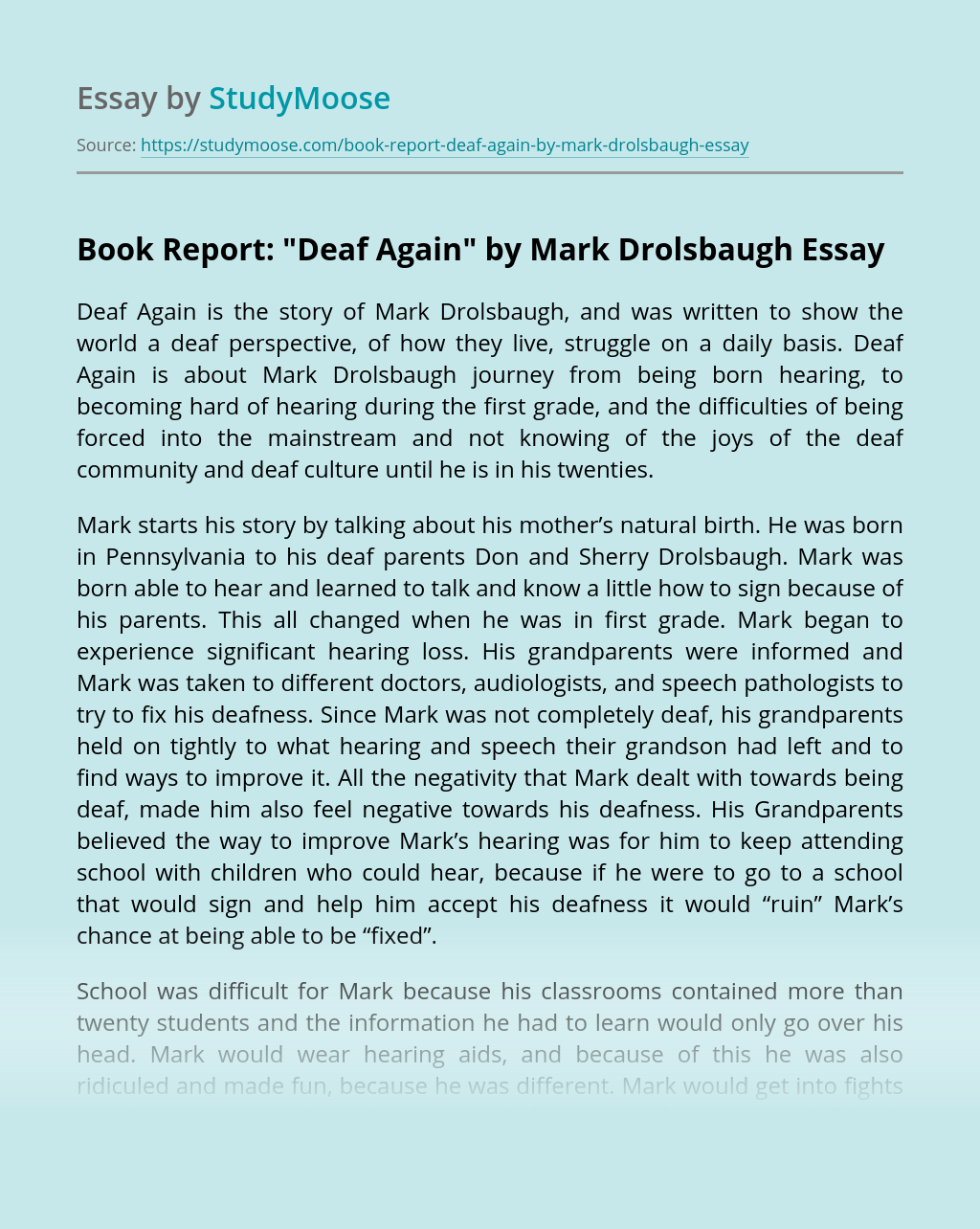