In the classic Shakespeare play, Julius Caesar, Mark Antony and Brutus make speeches at Caesars funeral. While Mark Antony was trying to justify to the Romans his reasoning behind killing Caesar, while, on the other hand Brutus had basically said he disagreed with the men who murdered Caesar, he said his speech with very intelligent wording to get the Romans to think for themselves instead of just being told how to think by Mark Antony.

Brutus’s speech was more directed toward the Romans to make them understand why Brutus murdered Caesar.

Don't use plagiarized sources. Get your custom essay on
“ Reflection on Mark Antony Speech Presentation ”
Get custom paper
NEW! smart matching with writer

In his introduction he starts with, “Romans, countrymen, and lovers!” using this phrasing Brutus made the Romans feel as though he was putting them on his level instead of just making a speech. Throughout the speech he describes Caesar as an “ambitious” man. Brutus knew calling Caesar ambitious would make the Romans start to think Caesar was a bad ruler over their people. Brutus knew the countrymen would believe whatever he said, knowing they did not think for themselves.

Antony’s speech was more personal and sarcastic. In contrary to Brutus he opens his speech by saying, “Friends”, instead of Romans, which helped the people relate better, even in the very beginning of the speech. While Antony was always known for his “playboy” lifestyle, he delivered the speech with such intelligence way to make the people, who had just sided with Brutus, changed their minds just as quickly. Antony kept repeating the line in the speech, “But Brutus said it, and Brutus is a honorable man”.

Saying this he showed the people that just because someone that is an “honorable” man doesn’t mean you should believe everything they have to say without proof. Antony repeatedly used the word “honorable” to describe Brutus. This was that he was contradicting Brutus’s speech.

A paralipsis is a device used to draw attention to something while claiming to pass it over. There are two examples of this one is “I come to bury Caesar, not to praise him.” But throughout the speech he praises Caesar and what he as done. Another example is “I speak not to disprove what Brutus spoke, But here I am to speak what I do know.”, although he talks well about Caesar and what he has done for Rome, in contrary to what Brutus said.

While comparing the two speeches, I have observed Antony’s speech was more persuasive. He made points to contrast what Brutus said in his speech about Caesar. He says that Brutus was wrong, and he put a new spin on it. For instance, Brutus says “Had you rather Caesar was living and die all slaves…” which was countered by Antony saying that Caesar felt deeply for his people and that he was a very humble kindhearted person. Throughout Antony’s speech he uses devices, tactics, and his sympathy to his advantage. Brutus only had one point, which was that he killed Caesar for Rome, to stand on. All in all, Antony’s speech was more persuasive than Brutus’s.

Reflection on Mark Antony Speech Presentation. (2016, May 27). Retrieved from https://studymoose.com/reflection-on-mark-antony-speech-presentation-essay 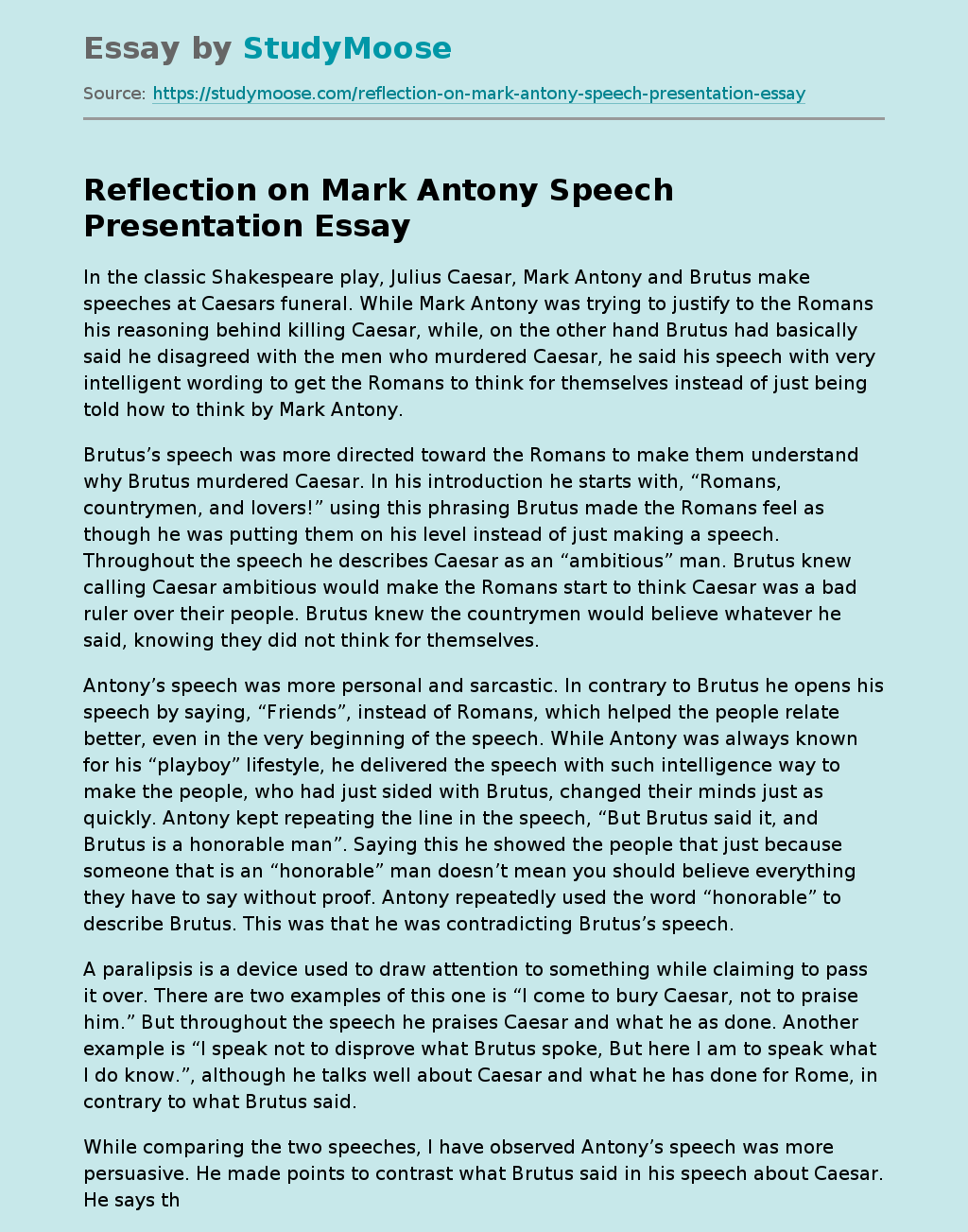