Elements of Irony in Native Son Native Son paints a disturbing, harsh picture of life within the “Black Belt” of Chicago in the 1940s. Wright uses irony; sometimes subtly and at other times obviously to shape the view of the reader and as a foreshadowing mechanism. From our initial scene to Bigger’s death, the technique of irony employed by Wright is effective, and devastating. Our initial symbol which foreshadows the fate of our protagonist is the “huge black rat” (5). The rat represents the feelings which Wright explores within Bigger.

Don't use plagiarized sources. Get your custom essay on
“ Elements Of Irony In Native Son ”
Get custom paper
NEW! smart matching with writer

The rat is killed right away, before it really has a chance, yet it is able to attack Bigger before it is destroyed. By attacking instead of fleeing, the rat is caught and destroyed, much like Bigger as the novel progresses. Much like the rat, Bigger teeters between the predatory (the initial response to the rat) and the hunted (the rat as killed by Bigger). The fact that the rat is destroyed by Bigger makes this scene even more ironic.

The idea of blindness permeates the novel in several ways.

We can see the psychological and emotional blindness of Bigger, the blindness to reality by the hyper-religious Ma, and the blindness to the real role and ideals of the Communist party by both Jan and Mary. Perhaps the best use of irony is the physical blindness of Mrs. Dalton. Mrs. Dalton is the epitome of blind; she has very sensitive senses (she notices the smell of alcohol in Mary’s room, saying: “You’re dead drunk! You stink with whiskey! ” (86)) but she is unable to see Bigger killing her daughter.

Her extra sensitive hearing and lack of sight give Bigger the reason and opportunity to smother Mary. Yet, the true irony falls into the situation surrounding Mr. and Mrs. Dalton’s participation with groups such as the NAACP. While they believe that contributions of ping pong tables to inner city youth will help, their insulting charity to Bigger, coupled with Mr. Dalton’s excessive rent charges, ultimately causes the death of their daughter. Bigger is the most ironic element of the entire novel.

From his name, we expect this character to make something out of himself, to escape from the ghettoes of Chicago and end up rich, successful and important. Wright does not allow this. The idea that Bigger will be destroyed is planted into his own head and into the readers right away. The naming of this character is a clever device utilized by Wright, though it’s irony is bitter. Bigger is not ironic simply due to his name. His actions also represent a sort of sick irony. Perhaps the saddest, sickest display of this is the rape of Bessie.

While we are uncertain, and it would be impossible to prove that Bigger raped Mary prior to killing and decapitating her, by raping and murdering Bessie, a portrait of Bigger as the violent monster is created. This is important because it not only shapes the view of the public within the novel, but also that of the reader. Wright changes the tone stating: “He had done this. He had brought all this about” (239). Wright seems to do this for a reason, to illustrate how easy it is for the opinion of Bigger to shift, but also to show what a man is capable of when it is expected of him.

The irony is that Bigger has, in effect, done himself in by murdering and raping Bessie. He believes that by killing her and tossing her body down the air shaft he shall escape, though just the opposite occurs. Ma represents a religious and foreshadowing irony that follows her character throughout Native Son. When she warns Bigger that “the gallows is at the end of the road [he] is traveling”, she is foreshadowing the fate of her son by the end of the novel (9). She tells Bigger to acknowledge his manhood by killing (the rat), which manifests into his killing Bessie.

Through religion, however, we see the most obvious and devastating irony represented by Ma. She attempts to pray for the soul of her son, and gives him a wooden cross to wear around his neck. This cross, particularly due to its construction, appears identical to the burning cross of the Klu Klux Klan which Bigger sees out his jail cell window. Ma has effectively turned Bigger away from Christianity forever, in spite of her desire to do nothing other than save her son’s soul.

Bigger ends up feeling that he “can die without a cross.. . [that he] ain’t got no soul! ” (338) Irony follows Bigger throughout his life, and ultimately in his death. The introduction of Boris A. Max in Native Son represents a change; this is the first time Bigger has been able to explore some of his feelings, and with a white Jewish man! It is important to look at Max as a Communist and a Jew, because this makes him suspect in the eyes of popular opinion. Max is able to ask Bigger questions which are uncomfortable, but which make him think, which finally make him a man.

Max states: “You’re human, Bigger” (424). This is the only time that anyone really says anything of this sort to Bigger. Bigger recognizes this and makes point of it, ironically, as he is about to be put to death. It is a difficult and important change which Wright employs at this point. Bigger Thomas was doomed from the beginning of the novel. We could see this foreshadowed by the rat, we could quickly sense the irony in his name and his very being. The world in which Bigger Thomas lived was cruel, unyielding in its destruction.

We learn early that Bigger could not beat his fate, and we can see this in David Buckley. The district attorney is able to defeat Bigger and gain public acceptance by putting him to death. There is an ironic twist, if we look back to the beginning of the novel. We can see Bigger reading a sign with Buckley’s picture and the slogan, “YOU CAN’T WIN! ” (13). Sadly, we find this to be true, with Bigger Thomas’s death by the novel’s end. Work Cited Wright, Richard. Native Son.

Elements Of Irony In Native Son. (2016, Sep 13). Retrieved from https://studymoose.com/elements-of-irony-in-native-son-essay 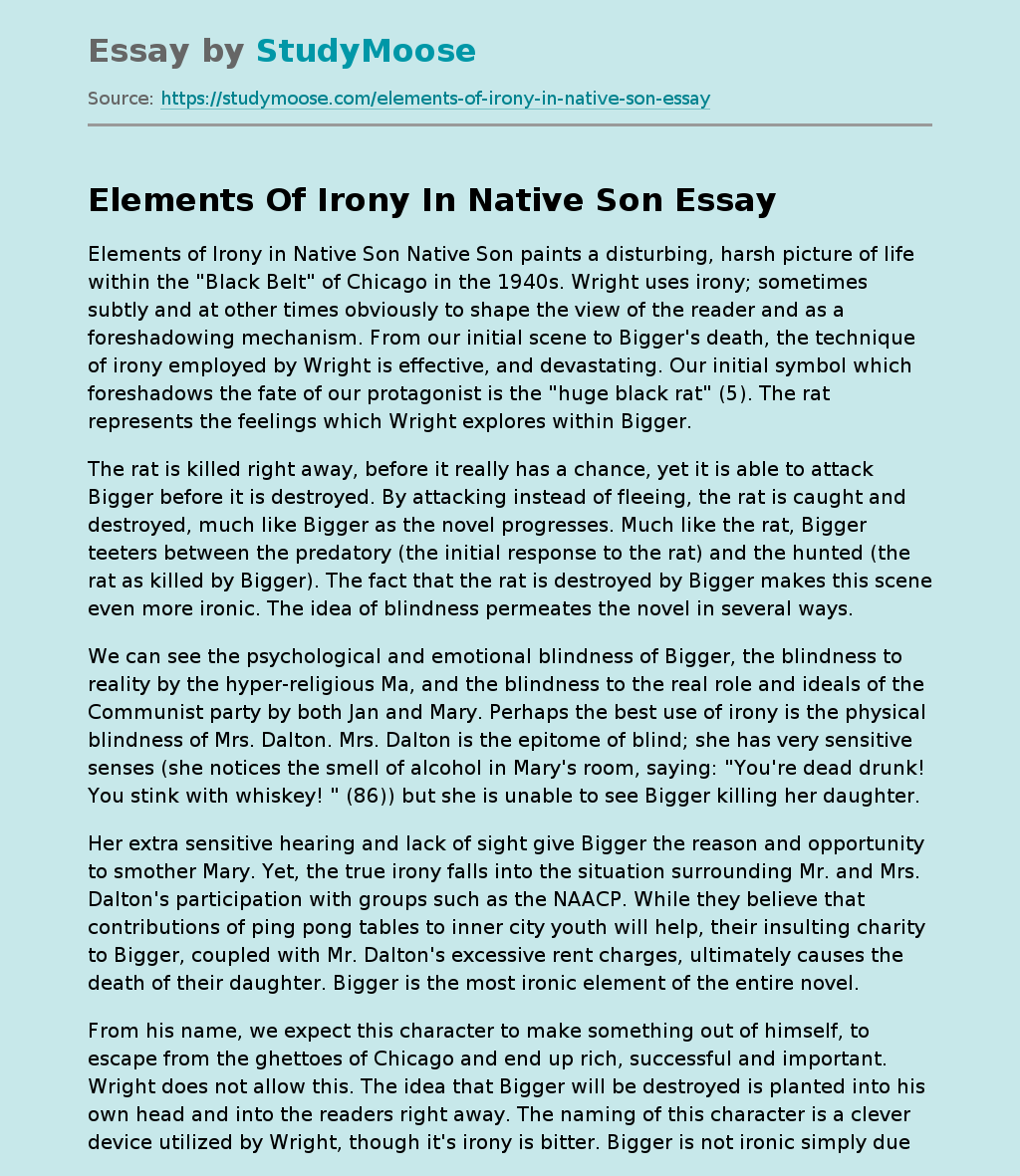