Native Son, written by Richard Wright in 1940, illustrates the life of a 20 year old African American, Bigger Thomas, living in a tenement room in the South Side ghetto with his mother and younger sister and brother. As the novel begins, Bigger’s mother urges him to accept a job that is being offered by Henry Dalton, a wealthy white man who owns much of the property in the ghetto. She tells Bigger that if he refuses, the family will be denied relief, and be unable to pay rent or buy food.

Don't use plagiarized sources. Get your custom essay on
“ “Native Son” by Richard Wright Analysis ”
Get custom paper
NEW! smart matching with writer

Bigger agrees to see Mr. Dalton, but first visits his friends at a poolroom, where they plan out their latest and most daring robbery. Although the plan to rob a white-owned delicatessen is Bigger’s own, he becomes frightened and ruins the plan.

Bigger goes to see Mr. Dalton at his mansion, and accepts the job of chauffeur. He is given a room to live in and is to be paid $25 per week, a good salary for those times.

Nevertheless, he is extremely nervous, because he will now have to live his life amongst white people, whom he knows from experience are racists. Bigger’s nervousness turns to near panic when Mary Dalton, Mr. Dalton’s beautiful daughter, appears. She tries to speak to Bigger as an equal, rather than as a servant, but Bigger is worried that such talk might cause him to lose his job.

Bigger’s first task on his new job turns into an unparalleled nightmare.

He drives Mary to see Jan Erlone, her boyfriend. The three then drive to the South Side, and eat in one of Bigger’s favorite restaurants. Jan and Mary ask Bigger to eat with them, and Bigger does so reluctantly. Bigger drops Jan off near his home, and then drives Mary home. Mary is quite intoxicated at this point, and Bigger helps her to her room, fearful that he might be caught with a drunken white girl in his arms. Suddenly, Mary’s blind mother appears at the door of the bedroom, just as Bigger is putting Mary to bed. Wild with fear, Bigger puts a pillow over Mary’s head to suppress her moans, so that Mrs. Dalton will not discover him. When Mrs. Dalton leaves, Bigger takes the pillow away, and Mary is dead. Bigger brings her body to the basement, and shoves her into the furnace.

In the second book of the novel, Bigger first tries to deceive the Daltons about their missing daughter by implicating Jan in her disappearance. He enlists his girlfriend Bessie in a plan to extort ransom money from the family, and sends a note to Mr. Dalton asking for $10,000, which he signs “Red,” to make everyone think the communists have Mary. Newspaper reporters are allowed into the Dalton’s basement, and one of them discovers unburned pieces of human bone, and Mary’s earring. Bigger witnesses the discovery and flees. He goes to Bessie’s house to call off the ransom plan, and the two hideout in an abandoned building. There Bigger rapes Bessie, and then murders her, so that she cannot be interrogated by the authorities. Five thousand police officers conduct a brutal house-to-house search of the ghetto, and Bigger is soon caught.

As the Chicago newspapers fill their pages with horrifying racist imagery, much of the city’s white population is whipped into a frenzy of hate, and the call for Bigger’s death grows louder and louder. Jan, who has forgiven Bigger for murdering his girlfriend and then trying to implicate him in the crime, helps Bigger get a lawyer, Jewish Communist Boris Max. In the course of preparing Bigger’s case, lawyer and client actually become close, and their relationship enables Bigger to begin to understand his own actions. At the end of Bigger’s trial, Max makes an electrifying appeal for his life. The appeal fails, and Bigger is sentenced to death. In their last meeting, Bigger tells Max that his crimes must have had a good purpose, or else he would not have risked his life committing them. Max is clearly shaken by Bigger’s reasoning, and the two men part, still in separate worlds.

Bigger is not a traditional hero by any means. However, Wright forces us to enter into Bigger’s mind and to understand the devastating effects of the social conditions in which he was raised. Bigger was not born a violent criminal. He is a “native son”: a product of American culture and the violence and racism that suffuse it.

Wright’s exploration of Bigger’s psychological corruption gives us a new perspective on the oppressive effect racism had on the black population in 1930s America. Bigger’s psychological damage results from the constant barrage of racist propaganda and racial oppression he faces while growing up. The movies he sees depict whites as wealthy sophisticates and blacks as jungle savages. He and his family live in cramped and squalid conditions, enduring socially enforced poverty and having little opportunity for education. Bigger’s resulting attitude toward whites is a volatile combination of powerful anger and powerful fear. He conceives of “whiteness” as an overpowering and hostile force that is set against him in life. Just as whites fail to conceive of Bigger as an individual, he does not really distinguish between individual whites—to him, they are all the same, frightening and untrustworthy. As a result of his hatred and fear, Bigger’s accidental killing of Mary Dalton does not fill him with guilt. Instead, he feels an odd jubilation because, for the first time, he has asserted his own individuality against the white forces that have conspired to destroy it.

Throughout the novel, Wright illustrates the ways in which white racism forces blacks into a pressured—and therefore dangerous—state of mind. Blacks are beset with the hardship of economic oppression and forced to act subserviently before their oppressors, while the media consistently portrays them as animalistic brutes. Given such conditions, as Max argues, it becomes inevitable that blacks such as Bigger will react with violence and hatred. However, Wright emphasizes the vicious double-edged effect of racism: though Bigger’s violence stems from racial hatred, it only increases the racism in American society, as it confirms racist whites’ basic fears about blacks. In Wright’s portrayal, whites effectively transform blacks into their own negative stereotypes of “blackness.” Only when Bigger meets Max and begins to perceive whites as individuals does Wright offer any hope for a means of breaking this circle of racism. Only when sympathetic understanding exists between blacks and whites will they be able to perceive each other as individuals, not merely as stereotypes. 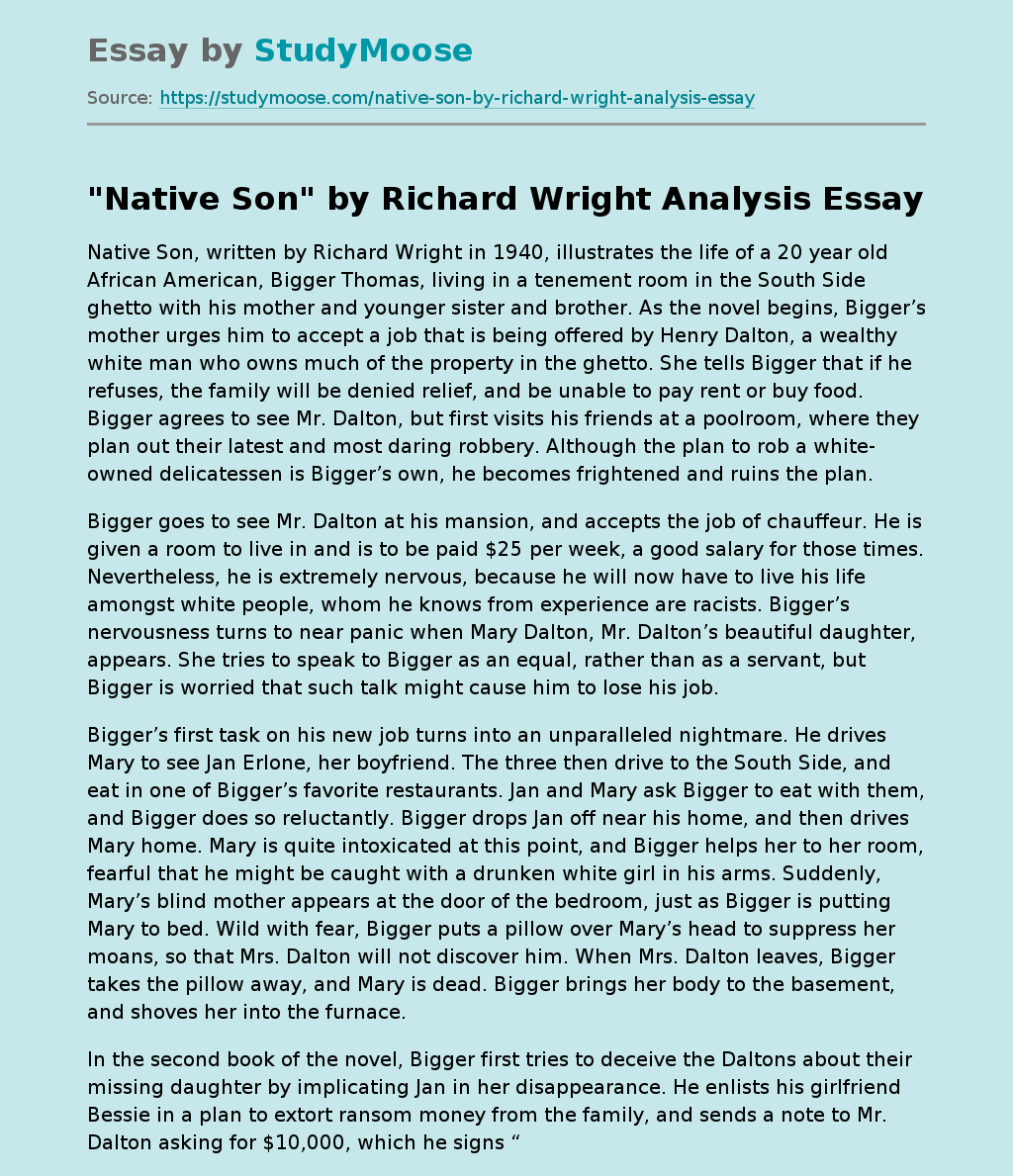