Our decisions in life have an affect on how we are as people. Whether we judge someone on their looks or their demeanor we are making a decision that could effect how we think and feel. In Richard Wright’s “Big Black Good Man”, Olaf the main character makes such a judgment. Olaf’s judgment changes his life for the next year until he finally finds closure. In order to see how decisions and judgments affect our lives, we need to look up close and personal with Olaf.

In the beginning Olaf is a man of relaxation and satisfaction with his life except for the sheer tiredness of work. He was a down to earth man “The watery gray irises behind the thick lenses…gave him a look of abstraction, of absentmindedness, of an almost genial idiocy” (281). He is satisfied with his life in saying “I’m not rich, but I’m not poor either” (281). He goes on stating that he is satisfied with his life, “Got good health…Got no debts…Money ain’t everything…” (281).

Olaf also shows he is a man of education. He is not an ignorant man. He has “Traveled all over the world” (281). He said he could have had children and “Could of taught them languages” (281), Languages of all kinds. In conclusion he is well educated and satisfied with his life.

Olaf was instantly judging this man because he was “too bid, too black, too direct, and probably to violent to boot” (283). Olaf felt insecure around this man as if to insult him “he felt as though this man had come here to…remind him how puny, how tiny, and how weak and how white he was” (283). Olaf wanted to refuse this man a room, “emotionally determined to refuse a man a room solely on the basis of the man’s size and color” (283), all because of a judgment he had instantly made about the man. His judgment took over him and “sheer fear made him yield” (283). The fear that engulfed him because of his judgment took over him “Resentment clogged the pores of his wrinkled white skin” (283). This resentment about the man causes Olaf to be hesitant about giving him the woman he wanted.

The Big Black man wants a woman for the night just as sailors always want “…almost always women and whiskey” (282) and Olaf says in the beginning “there’s no harm in that” (282), but for this man Olaf “felt a deep and strange reluctance to phone any of the women whom he habitually sent to men” (284). Olaf called a girl for the black man and insisted on telling her “how big and black the man is” (285). This resentment towards the black man may be because Olaf has some insecurity about his own size. He says “I’m not prejudiced” (285), so the resentment for him has to be due to that insecurity of his smallness. Something that may not have been evident before that was hidden deep down inside him. “Try as he might, he could not shake off a primitive hate for that black mountain of energy…” (285), and what happened next only seemed to confirm his fear even more.

The black man entered the room on his last night, “then a strange tension entered the office” (287). “Terror seized him” (287), seized him because he had judged the man. Olaf’s judgment had scared him into thinking the man was going to kill him, “This evil blackness was about to attack him, maybe kill him…” (287). The Black man was putting his hand around the man’s neck, probably knowing Olaf had made a judgment about him. Olaf was “gazing into the grinning blackness…” (287), grinning being the key word. The black man knew Olaf was scared of him, he knew Olaf had judged him and he was taunting him. Although he was measuring him for a shirt, he did it with such slyness as if to taunt him. Olaf “felt trapped in a nightmare” (287), for the next year that is what it would be, a nightmare of revenge.

“He lay awake the rest of the night dreaming of revenge” (288), blaming the black man for causing him such terror. If he had not made the judgment about the black man he would not feel so much hatred. Olaf’s whole demeanor changed from that of satisfaction and life is good attitude to detailed and horrific thoughts. “He would surprise that sleeping black bastard of a giant and he would drown gasping and choking like a rat… (288). Olaf was a changed man; one quick judgment in his life changed him to a man of hatred and revenge. “For many months he feared the return of the black giant” (289), and a year later the black man did return, Olaf’s greatest fear, but not to what Olaf expected.

This time the black man returned “a sudden resolve swept Olaf: this time he would even the score” (289). Olaf was filled with braveness from such revenge and hatred he instantly thought the black man wanted a room but he did not. The black man brought him shirts, “Olaf began to laugh hysterically…” (290), laughing because he was relieved and ashamed. “The tension and shame and fear and haunting dread of his fantasy left him” (290). After the tension, fear, and the judgments left, “Olaf realized there was compassion in that stare that he had never seen” (290).

Our decisions and judgments greatly affect who we are as people. Olaf went from an easy going and down to earth man to a man of pure hatred and revenge just because of one judgment he made in his life. This judgment continued to haunt him till finally the black man returned. When the back man did return he surprised Olaf and Olaf’s judgments swept away and he saw the black guy’s compassion. If Olaf hadn’t been quick to judge he would have seen that compassion from the start. Seeing what judgments and decisions Olaf made shows what the wrong ones can cause. Don’t be to quick to judge is a moral or a theme of the story. Judging someone before you know them can be a big mistake as it was in Olaf’s life. 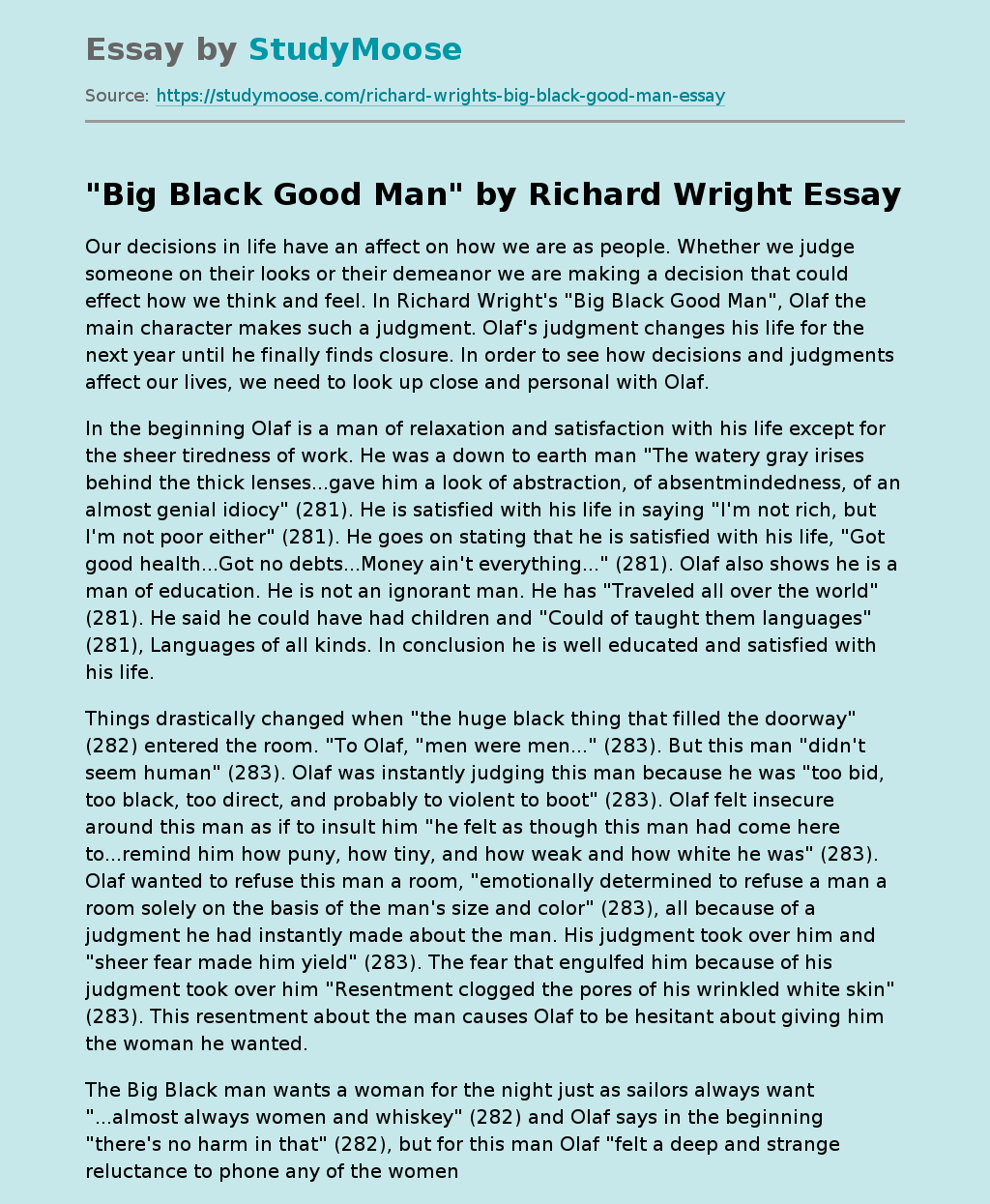