The Red-room in Jane Eyre

It is not rare to encounter effective and incisive uses of space within nineteenth century literature. The famous novel _Jane Eyre_ by Charlotte Brontë is one of the finest examples of a fictional work with profuse uses of space in the period. The red-room in which the little Jane Eyre is locked as a punishment for her panicky defense of herself against her cousin John Reed is the first noteworthy use of space in the novel. Not only does it signify to the reader it is a Gothic novel they are reading but the room serves as a symbol for a number of meanings as well.

Don't use plagiarized sources. Get your custom essay on
“ The Red-room in Jane Eyre ”
Get custom paper
NEW! smart matching with writer

Charlotte Brontë introduces the room – “one of the largest and stateliest chambers in the mansion” – to her readers with a Gothic painted picture (13). One would need to make little effort to understand why this room is called “the red-room.” Inside the room are various nuances of the red color and of some other hot colors.

It has “a bed supported on massive pillars of mahogany, hung with curtains of deep red damask,” which stood out “like a tabernacle in the centre” (13). Aside from a table at the food of the bed “covered with a crimson cloth,” the toilet-table and chairs are made of “darkly polished old mahogany” (13). More interestingly, the room is also carpeted in red.

In addition, “the two large windows, with their blinds always drawn down, were half shrouded in festoons and falls of similar drapery,” and “the walls were a soft fawn colour with a blush of pink in it” (13).

That Jane’s uncle Reed spent the last minutes of his life in the room, along with the fact that the place is chilly, remote, quiet, and seldom entered, adds up to its internal atmospheric horror and mystery: “a sense of dreary consecration had guarded it from frequent intrusion” (14).

Apart from all the red colors were the piled-up mattresses and pillows of the bed, which “rose high,” “glared white,” and being “spread with a snowy Marseilles counterpane” (13). Scarcely less prominent was an ample cushioned easy-chair near the head of the bed, also white” (13). The little existence of white in this hell-resembled red place may be a metaphor for the being of the little Jane Eyre under the cruel treatment of her aunt and her cousins at Gateshead. It may, as well, be a metaphor for what happens within her mind as the innocent part of it, like that of any other ten year old child, is facing her increasing irritation, nervousness, and terror inside the room.

No sooner has she moved across the looking glass than she pays attention to a “strange little figure” gazing at her “with a white face and arms specking the gloom, and glittering eyes of fear moving where all else was still,” as well as “the depth it revealed” (14). Perceiving herself in the mirror to be a spirit “half fairy” and “half imp,” she saw a combination of perceptions in which the former is how she perceives herself to be, and the latter is how a troublesome child she is as perceived by others (14).

Thus, this represents the very beginning of Jane’s self-characterization as an independent woman since her perception of herself seems to be so vulnerable in front of others’ that she sees such a combination of perceptions. She is in the process of internally struggling to be her true person, trying not to succumb to her negative and disturbed thoughts. By stemming a “rapid rush of retrospective thought” before being swallowed by “the dismal present,” she is establishing her own identity as well as dignity (14). Therefore, the room also resembles the hardship Jane must defeat in order to maintain and develop her own liberty as well as integrity.

The longer Jane is imprisoned in the red-room, disturbed feelings and thoughts seem to take over her mind more and more. She keeps thinking of herself as a “revolted slave,” unjustly punished and thus isolated as “a discord in the family” (15). Her confined position at Gateshead has become clear to her. Her head is full of questions she asks herself such as “Why was I always suffering, always browbeaten, always accused, for ever condemned? Why could I never please? Why was it useless to try to win any one’s favour?” (14)

She then switches her thoughts to her deceased uncle. She imagines Mr. Reed, the brother of her own mother, to whom he promised to look after Jane after her mother passed away, would have never maltreated her. She continues to think that her uncle may find her current mistreatment unacceptable and would want to appear to avenge her. At this point, she believes in the presence of his spirit in the room, and screams.

Bessie and Abbot then open the room. Jane begs them not to leave her in the room alone with the ghost, but Mrs. Reed claims that Jane just wants to trick them into releasing her. Eventually, Jane faints and falls into unconsciousness. From that point on, although she is released afterwards, she still is stuck in financial deficiency, excluded from society, and distanced from love. Whenever her integrity is challenged later, readers know that she will unavoidably think back to the red-room as a symbol of her long lasting suffering.

Another possible essence of the red room may be a connection between Jane and the character Bertha Mason later on in the novel. If Jane is imprisoned in the red-room, Bertha is locked in Rochester’s attic. Both of them are kept utterly isolated from the outside world. However, whereas Jane is a sane individual who generates rational thoughts when being imprisoned, Bertha is an uncontrollably mad woman. Still, due to the passion and rebellion that they both possess, readers may still somehow sympathize with Bertha.

In a word, the red-room is among many profound uses of space in Charlotte Brontë’s _Jane Eyre_. The room is the first obvious Gothic picture painted in the novel with a sense of consternation and mystery. Also, it resembles the feelings of fear and insecurities of the heroine not only within the chapter but also through later events in the story. It is a prison of her independence and identity formed by both the external hardships the society around her puts upon her and her negative feelings as reactions to those hardships. Only after breaking all such restraints can Jane achieve her complete confidence and happiness.

The Red-room in Jane Eyre. (2016, Aug 12). Retrieved from http://studymoose.com/the-red-room-in-jane-eyre-essay 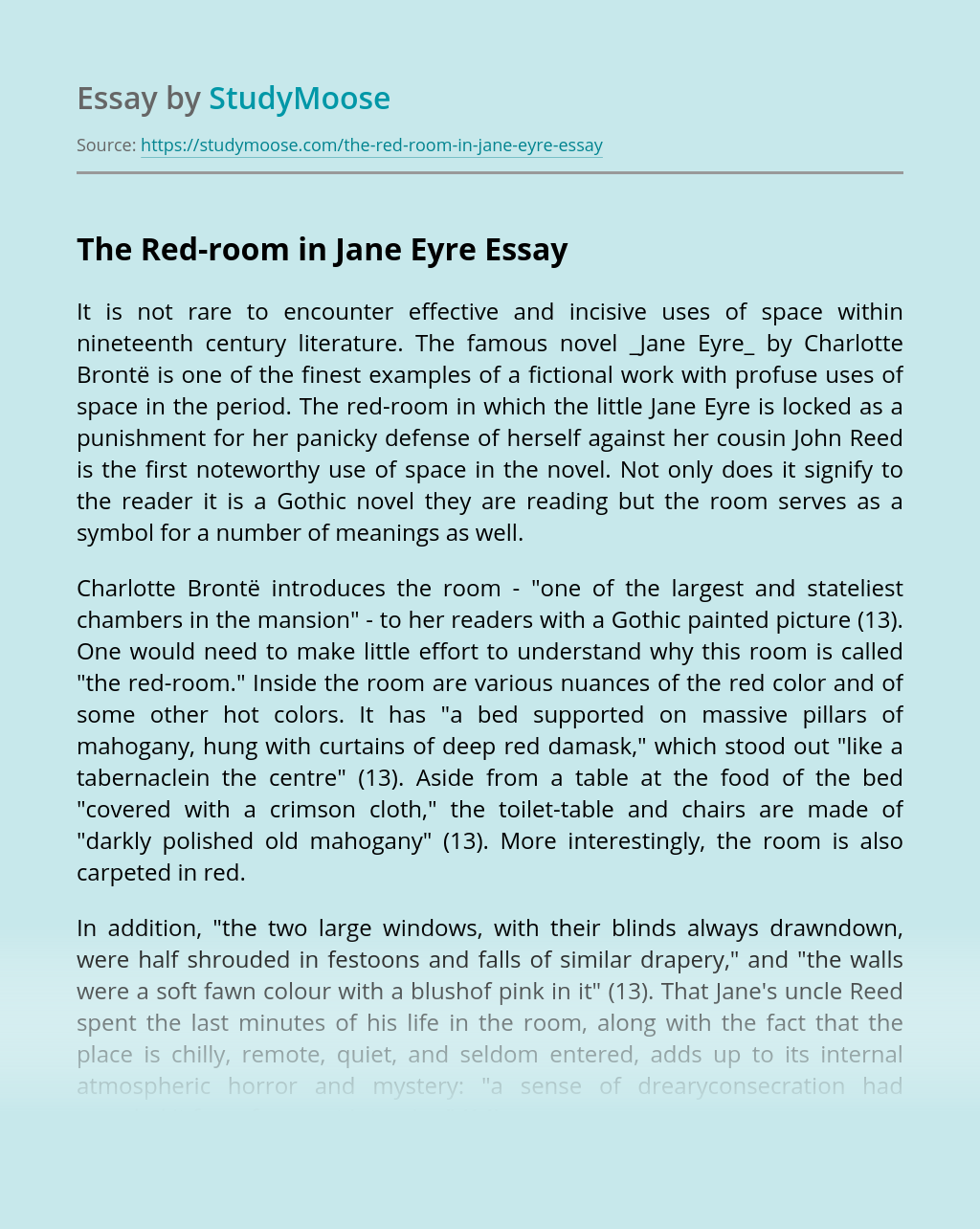