How to Tame a Wild Tongue?

In the article of “How to Tame a Wild Tongue” written by Gloria Anzaldua, she discusses about the relationship between the language and identity. In the other article, which is “Mother Tongue” written by Amy Tan, she discusses her observation and thoughts about using the English and the perceptions, prejudices from other people regarding other languages. Both articles are pointing out how important is the language is in our lives and how we can suffer if we are not using do not use it correctly.

Don't use plagiarized sources. Get your custom essay on
“ How to Tame a Wild Tongue? ”
Get custom paper
NEW! smart matching with writer

Using another language can be very beneficial or painful depending on the way the people use it. Amy Tan discusses the different “Englishes” she uses depending on the situations she is in. For instance she uses “broken” or “limited” English when she talks to her mother or sometimes to her husband. On the contrary she uses proper English when she is giving a speech to a crowd. She mentions the importance of the words in the article by saying, “power of language — the way it can evoke an emotion, a visual image, a complex idea, or a simple truth.

In Amy Tan’s example about her own mother, she clearly explains how people sometimes avoid her by saying, “in department stores, at banks, and at restaurants did not take her seriously, did not give her good service, pretended not to understand her, or even acted as if they did not hear her. ” ?Gloria Anzaldua’s essay is about the Chicano Spanish language, which is commonly believed by the people as a “bastard language” because it’s not standard Spanish or something else.

That makes people to believe that’s a poor quality language. This belief made Chicanos uncomfortable with their expressions.

The language is a part of  ethnic identity

Gloria Anzaldua believes that this should be change. She says “if a person with a low estimation of my native tongue, she also has a low estimation of me! ” She states that the language is a part of her ethnic identity and nobody shouldn’t feel shame about it. She gives us an example from her school about how hard is to be an immigrant in another country whose native language is different than yours. She has been punished just for speaking Spanish at school and being accused when she tried to give an explanation. Her teacher’s point was “If you live in America, you should speak English” even though this is against to the first Amendment. I can easily make a connection between me and Amy Tan, I think she is right and everybody carries a bag of vocabulary with himself or herself and picking the right word at the right time to form sentences makes each of us differ from each other. For example imagine a job interview with two candidates for the same position. One will get hired and other than the academic background and experience affecting the decision, presenting oneself is the key to put a good impression on the interviewer. I want to give a personal instance from my own experience similar to Amy Tan’s mothers.

When I came to this country, I found it extremely hard to explain myself when I wanted to register for ESL school. Even though I was there to improve my English, I felt like they were trying to get rid of me as quick as possible because of my English. ?To sum up , I can say language is maybe the most important thing after the health. We are exist as long as we can express ourselves whether verbally or written. There is only one way to us to be exist in USA as a immigrant, to improve our language and get rid of our accent in order to literary merge into the community.

How to Tame a Wild Tongue?. (2020, Jun 02). Retrieved from https://studymoose.com/tame-wild-tongue-new-essay 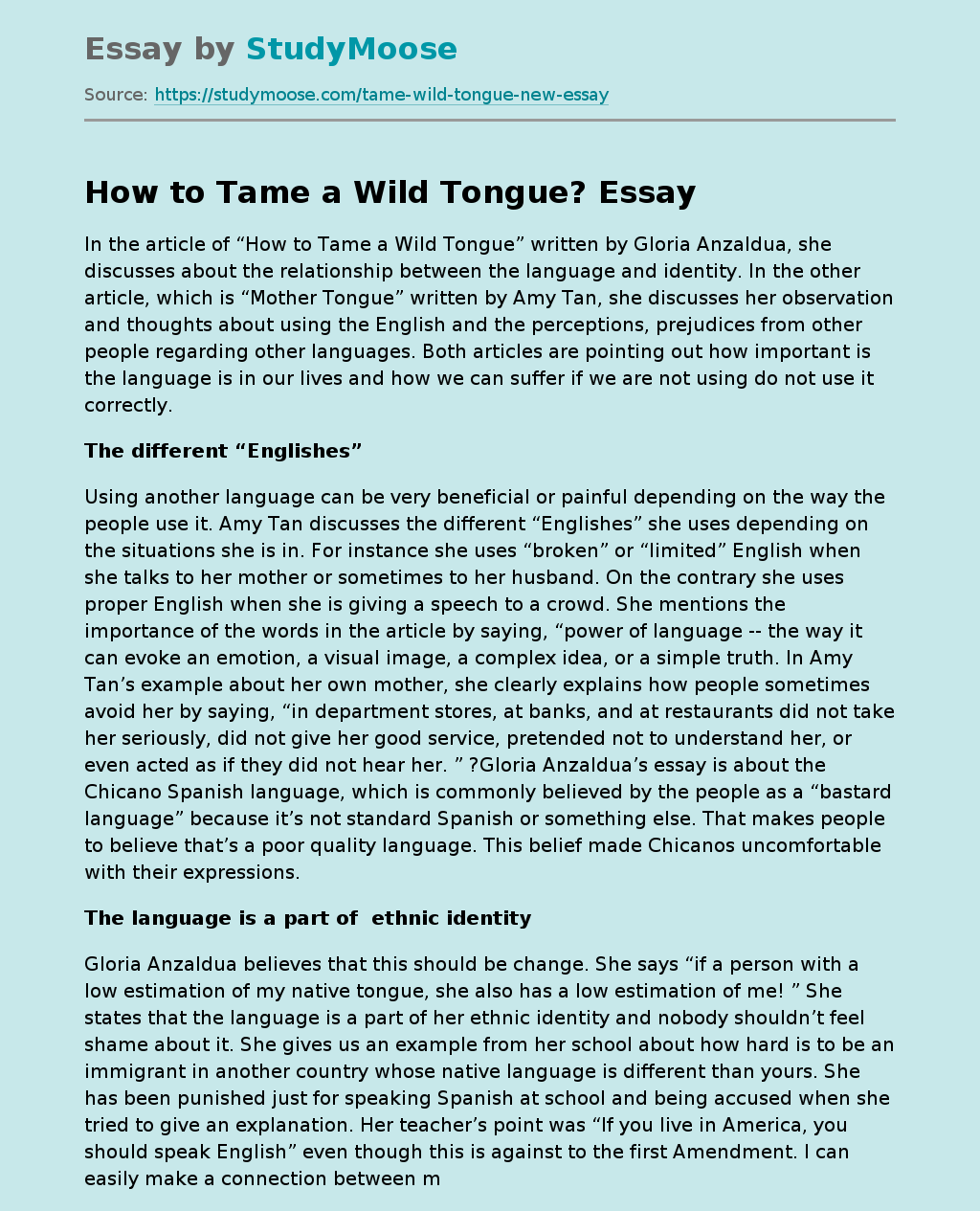