A survey conducted in 2004 showed that 75% of the teachers noted that they would spend more time teaching effectively if they had less disruptive behavior in their classrooms (public agenda, 2004).

Don't use plagiarized sources. Get your custom essay on
“ Changing Behaviors by Changing the Classroom Environment ”
Get custom paper
NEW! smart matching with writer

Examples of these disruptive behaviors include, speaking without permission and getting out of the seat. Another challenge for the teachers is to find classroom management strategies that are proactive, preventative and relatively easy to implement and which provide minimal disruption to the classroom.

There are different steps to changing the environment of a classroom. The first step is to observe: Finding out things like what types of behaviors occur in your classroom, when are most disruptive behaviors occurring, the time of day and under which type of circumstances? Where is disruptive behavior occurring? Are students able to work at desks without distractions? Are students able to work in group areas without distractions from the surrounding environment?

The last step is following up: these include questions like, are you using the modifications correctly?

Are the modifications being used consistently? Do any modifications need rearranging, changing, or removal? Do you need to implement additional modifications? Investigations have been done by researchers on the relationship between the classroom environment, student behavior and academic engagement (Hood-Smith & Leffingwell, 1983; Visser, 2001). A well organized classroom permits more positive interactions between teachers and children, reducing the probability that challenging behaviors will occur (Martella, Nelson & Marchand-Martella, 2003).

In addition, modifying the classroom environment may serve as a direct intervention for children who demonstrate ongoing disruptive behavior (Conroy, Davis, Fox & Brown, 2002). Although the well designed classroom has proven benefits, there is little research on the impact environmental modifications have on behavior and learning (Guardino,2009; Schilling &Schwartz, 2004). Modifications of the environment are preventatives, whole class approach that may decrease chronic behavior problems, prevent behavior problems for students who are at risk, and allow children with minimal behavior to access learning without interruption.

Although environmental modifications are an essential part of classroom management, many teachers are not aware of the process of implementing them. A case study was done on Ms. Thompson a fourth grade teacher and her class. The students exhibited high levels of disruptive behavior. During the baseline phase, data on the overall classroom academic engagement and disruptive behavior was collected. Ms. Thompson helped in defining academic as purposeful attention such as raising a hand or answering a question and disruptive behavior as speaking without permission, getting out of seat or non compliance to the teachers directions.

During the two weeks of data collection academic engagement and disruptive behavior was measured. Ms. Thompson directed a mini-reading lesson, after which students worked independently. The observation sessions were 15 minutes long; during this period some instances were noted where one or more students were not academically engaged during any 15 seconds interval. After the observation, discussions on how to improve the environment were done with Ms. Thompson; for example, seating arrangement, creating group space etc.

These changes were put in place and beginning the following Monday data was collected for 4 weeks. Ms. Thompson also filled a questionnaire regarding her perception of the effectiveness of changing the classroom environment to improve student behavior. After the classroom was modified academic engagement increased and stayed at or 45% as compared to the previous 3%. Before the intervention disruptive behavior occurred almost 90% of the time but after it reduced but was inconsistent during the final observations.

Both the questionnaire and a follow up interview relayed Ms Thompsons’ satisfaction with modifying her classroom environment to improve student behaviors. With the results gotten from the case study, it is with no doubt clear that modifications to the classroom environment increased academic engagement and decreased disruptive behavior. References Martella. R. C. Nelson, J. R. , & Marchand-Martella. N. E. (2003). Managing disruptive Behaviors in the school. Boston, MA: Allyn & Bacon. Schilling. D. L, & Schwartz, I. S. (2004). 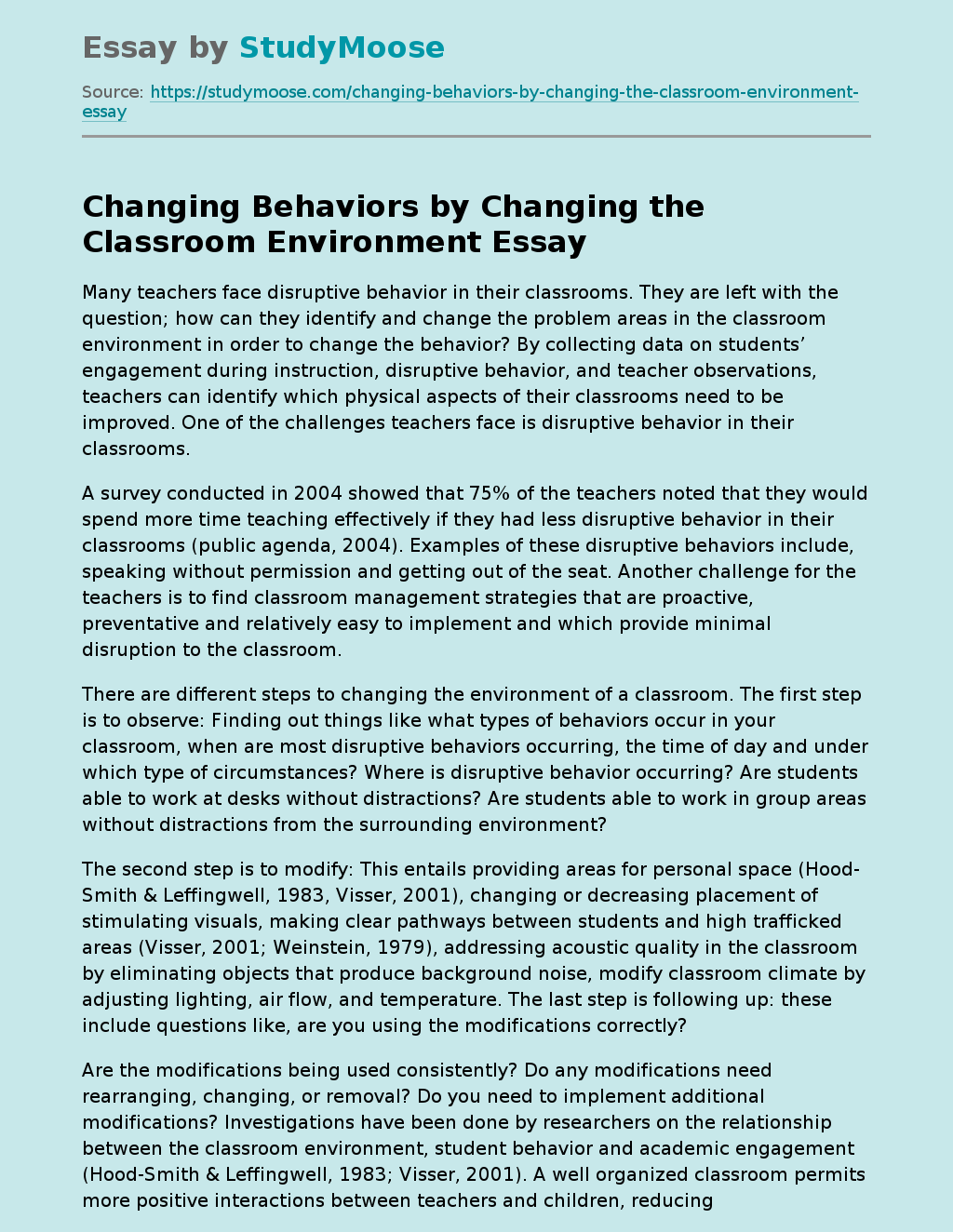