Should a Piece of Literature Be Judged on Its Literary Merits

Steven Brust once wrote: “In my opinion, the proper way to judge a novel is this: Does it give one an accurate reflection of the moods and characteristics of a particular group of people in a particular place at a particular time? If so, it has value. Otherwise, it has none. ” (Brust, Steven. 2005. Sethra Lavode). Brust, quite clearly has joined this debate regarding literary theories. He claims that if aspects of literary piece, aside from its own merits, are not significant then it has no worth.

Don't use plagiarized sources. Get your custom essay on
“ Should a Piece of Literature Be Judged on Its Literary Merits ”
Get custom paper
NEW! smart matching with writer

It is continually and widely argued by critics of literature whether a book should be based on its literary merits alone, or if only certain aspects, such as history, regarding its writing should be relevant. The relationship between history and literary work is often questioned. There are four main models that have been devised to explain this. The first regards a piece literary work as universal and belonging to no time period. The model states that historical context has no significance in literary texts, and that both should remain autonomous from each other.

Critics are concerned with literary texts being artefacts in themselves that surpass the possibilities of a particular time, thus the idea of specific historical context is dismissed. R. S. Crane supports this view and in an essay said history is part of “the general history of culture” whereas literature should be “imaginative works considered with respect to those qualities which can truly be said to be timeless… quite apart from any knowledge of their origin or historical affiliation” (Crane, Ronald.

1967.‘History versus Criticism in the study of literature’, in The idea of the Humanities and Other Essays Critical and Historical, Vol. 2. Chicago: University of Chicago Press).

In short, this model centres around the basis that a literary work should be judged on its, as Crane said, ‘timeless qualities’ for example the quality of its linguistic features and other aspects that give a work literary merits. The second model regarding history and literature is based on the idea that the historical context of a literary piece helps lead to proper understanding of it.

A text is produced within a certain historical context but this should remain separate from the literary context. This model is often favoured by critics that analyse literary texts by considering their historical background and context. This can be regarded to any aspectwhether it is: political, cultural or linguistic. A 1934 study by Basil Willey: The Seventeenth Century Background: Studies in the Thought of the Age in Relation to Poetry and Religion shows even by its title a support for this model.

It is implied that Willey and similar critics agree that historical context forms a foundation of understanding when studying a literary text. They would argue that literary work in order to be analysed must be understood and to be understood needs to be looked at in respects to its historical context. The third model when looking at the relationship between pieces of literature and history is essentially the opposite of the second. It centres on the idea that a literary piece can help us understand the time in which it is set.

This is explanation talks about realist texts in particular and how they can provide creative depictions of historical events or periods. It assumes that literary texts are almost subordinate to their historical context and they are reflections of their time. For example Keith Thomas appeals to Shakespeare to justify this point of view: “In Shakespeare’s plays, the curses pronounced by the characters invariably work… not just for dramatic effect” but that “it as a moral necessity that the poor and the injured should be believed to have this power of retaliation when all else failed”

(Thomas, Keith.1971. Religion and the Decline of Magic: Studies in Popular Beliefs in Sixteenth and Century England. London: Wensfield and Nicolson). This model is known as the reflective approach, it regards literary work as an aid to develop our knowledge of history using the historical context of a literary piece. The last model regarding literature and history is probably the most complex, though it is also seen as the most interesting to theorists. It claims that literary texts are connected with other discourses and this makes literature itself a part of history that is continually being written.

Critics that agree with this theory, widely known as ‘new historicists’, argue that the question of the relationship between history and literature is wrong; despite their differences the last three models assume that ‘history’ and ‘literature’ are fundamentally separate.

They distinguish between the interpretations of literary texts and the transparency of history. Stephen Greenblatt writes in an essay: “methodological and self-conscious is one of the distinguishing marks of the new historicism in cultural studies as opposed to historicism based upon faith in the transparency of signs and interpretive procedures” (Greenblatt, Stephen. 1990. ‘Towards a poetic of Culture’, in Learning to Curse: Essays in Early Modern Culture. London: Routledge).

Hence, new historicists argue that the making of the literary texts is a cultural practice, and only differ in their specific mode. No absolute distinction can be made between literary and other cultural practices. Theorists such as Hayden White, claim that this model implies that just like literary texts the ‘facts’ of history need to be read (tracing the past is similar to telling a story).

In an extract from White’s book, Tropics of Discourse: Essays in Cultural Criticism, He writes: Histories ought never to be read as unambiguous signs… but rather as symbolic structures, extended metaphors, that ‘liken’ the events reported in them to some form with which we have already become familiar in our literary culture… By the very constitution of a set of events in such a way as to make a comprehensible story out of them, the historian changes those events with the symbolic significance of a comprehensible plot structure. (White, Hayden. 1991. Tropics of Discourse: Essays in Cultural Criticism.

Baltimore: The John Hopkins University Press) Considering this we would come to the conclusion that methods of (critical) analysis should be suitable for both history and literary texts. In short, a new historicist perspective think that in the reading of a literary text the idea of historical context cannot be settled, and that this context is decided by a negotiation between the text and the reader Ultimately, the majority of literary theorists fall on the side that accepts the use and aid historical context when critically analysing a literary text.

Only the first model seems to completely disregard historical context in literary work for the belief that a piece of literature should be ‘timeless’. The second and third model accept historical context as part of the method of analysing a literary piece. However, still confidently differentiate between literature and history, they are seen as merely aids for each other.

The last model is set apart from the rest as it does not polarise the categories and treats them as to intertwine subjects that cannot be considered without each other. In my opinion historical context should be relevant to the reading of literary text, it is inevitable that the two should overlap especially during an in depth analysis of a literary text.

Should a Piece of Literature Be Judged on Its Literary Merits. (2016, Oct 04). Retrieved from https://studymoose.com/should-a-piece-of-literature-be-judged-on-its-literary-merits-essay 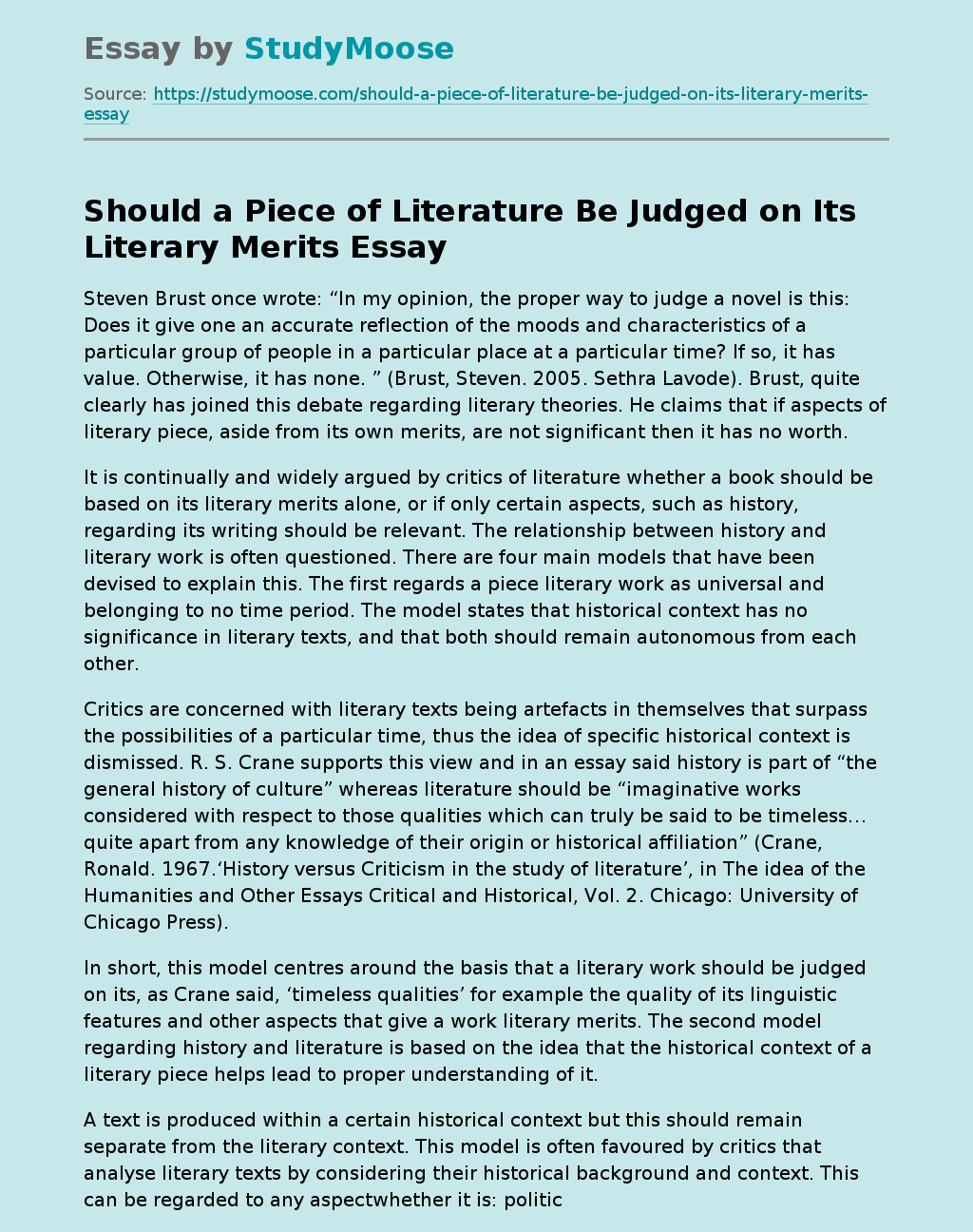