Donne’s view of death is not one of a cynic. He is a man who regards death not as the final battle of life, but rather in the Christian sense, of it being just a transfer of the soul from the earthly plain to its final destination. He considers death not to be an event to be held in fear, but one that is to be understood.

He believes so strongly in this philosophy that in Sonnet 10, he instructs people not to fear death.

He insults death, personifying it as a person who has a far greater reputation than he has earned. He tells death not to pride itself in its reputation of a “mighty and dreadful” horror even though regarded so by some, as it is nothing more than an extended sleep. He reduces death to a very low level, associating it with poison, war and sickness. He further insults it by commenting on how it does not operate with free will.

It is confined to the boundaries set by fate, chance, Kings, and desperate men. Moreover, drugs of poppy and simple charms can provide the same sleeping effect , if not better; and sleep is such a great source of pleasure, why would anyone be reluctant to embrace it? Death is not something to be feared or to be held in awe. “One short sleep past, [humanity wakes] eternally” to the beauty of afterlife, which is far better a life than any human is experiencing presently.

In contrast, In Meditation 17, Donne does not imply that death is feared by some, or that it is thought to have monumental power.

He comments more on the effect it has on humanity. He compares life to a book, comparing each person to a chapter in this great book of life. Again, he regards death not as the end of life, but a beginning of a new one. He parallels it to the translation of each chapter to a different language, the language of the afterlife, with each chapter awaiting the inevitable translation. And since death is just a translation, wisdom can, and must be gained from it. Donne regards death not as a loss to the person afflicted by it, but as a loss to humanity as a whole, who have lost a small, but vital part of the community. Therefore, the burden of death must be shared by all, and by sharing this grief, it is Donne’s opinion that a treasure of God’s goodwill and knowledge will be gained.

Donne thinks that death is not that great of a hurdle. It is a mere stepping-stone in the process of eternal happiness. God uses death only as the transition from Earth to heaven, so it is something to be awaited and to strive to prepare for by all. 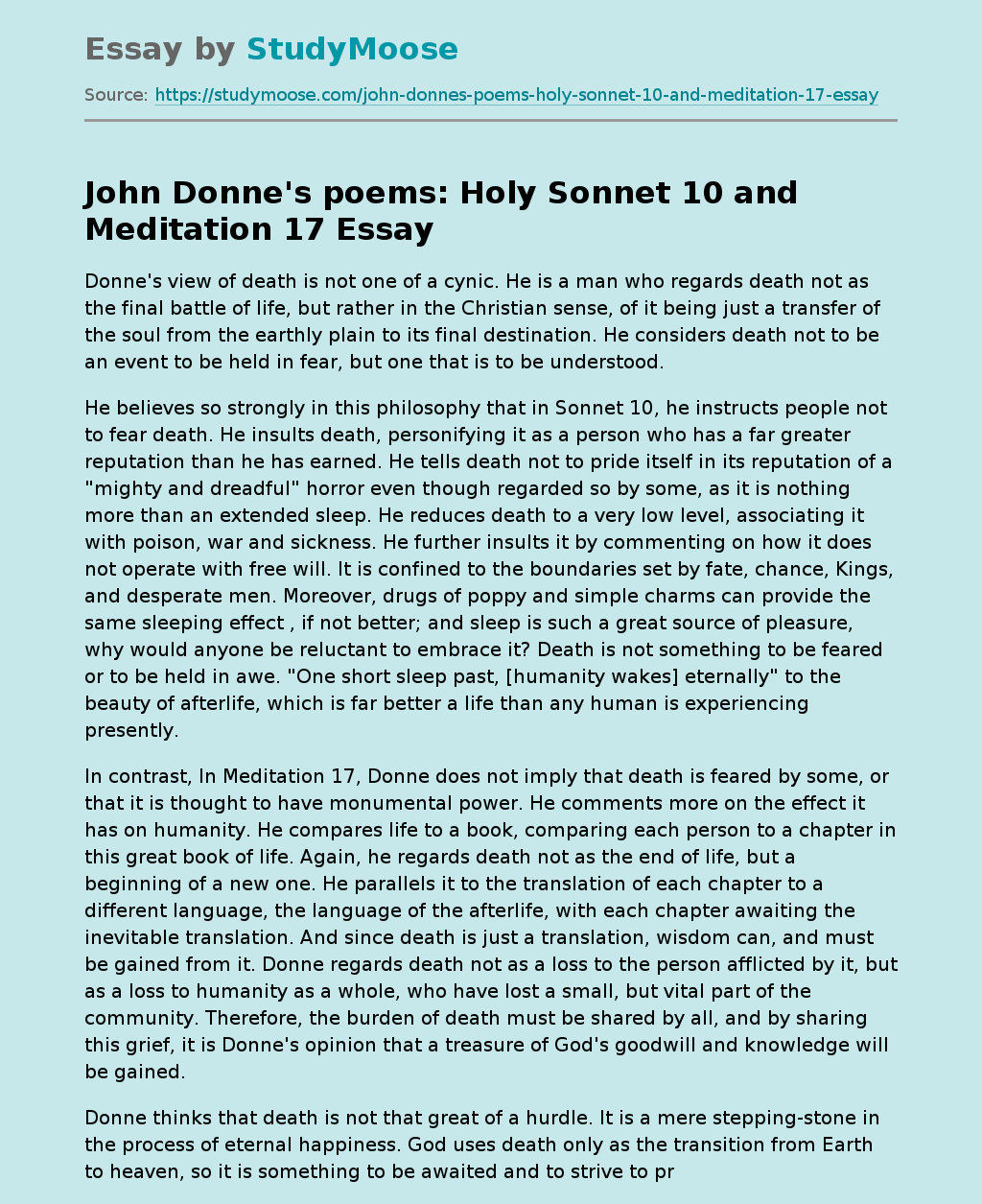