The play ‘A Midsummer Night’s Dream’ is complex on various levels. Comedy is a key level of complexity. I would focus on comedy associated with slapstick, this would aid in the development of my key dramatic intention of a victim theme. Examples of this theme can be found throughout the play but I am going to concentrate on Act 3 Scene 1. This is the scene were the mechanicals enter the wood. I feel slapstick would help aid the other comedy elements in this scene.

Bottom’s misuse of language, wit and physical comedy will also feature highly in this scene.

When staging the play, I would use an apron stage; this would establish a closer actor/audience relationship. It would also allow me to use a backdrop, yet bring the action nearer to the audience. This would also help create a more intimate atmosphere and aid in creating tension. My backdrop would be dark, using, browns, olive greens and black. I would use these colours in the form of huge tree trunks with olive green leaves; the black would fill the gaps and help create the idea of night.

This would also add to the tension, as the mechanicals would be anxious of entering the wood. For the lighting, I would have it simple yet effective. I would wash the thrust in plain white, with a slight yellow/straw colour. I would want this to remain quite dim, but bright enough so that the audience could still see the action. With this lighting the actors are in the middle of the light, then surrounded by darkness, this would also help create tension as it would symbolise how the actors don’t know what surrounds them, and can only see in the area which they are rehearsing.

To light the backdrop, I would use, batten floodlights to give a dim, but general wash. I would use green and purple; these colours would represent the fairy world, magic and a fantasy element, as the light is not from a natural source. I would have my mechanicals dressed in browns. I would use different browns but keeping them all similar. I think of the mechanicals as being dressed rather scruffily to represent their class and place in society. Bottom however would be dressed slightly differently.

I would have Bottom in a suit, with a different jacket and trousers. I think this would convey his trait of his false sense of seniority. The other mechanicals, although wearing trousers and shirts, would wear brown, smocks/cloaks as no characters other than Bottom and Quince distinguishable from the group. There would be a suspended ‘fairy bed’ for Titania in the middle of the stage. This allows her to be onstage, but away from the action so she is not noticed until needed. I would highlight her presence with a pink light on her.

The suspended platform would be draped in white material with flowers interwoven. This shows how she relates to nature. In the begging of Act 3 Scene 1 when the mechanicals enter, I want to establish some tension, but then break it suddenly with comedy. To do this, when the scene is set, I would have to actors walk on together huddled in a group. Bottom would be at the front of the group, leading the way. Although he is leading he would be cautious. The actor would keep his facial expression smirking nervously, with his eyes always moving and searching.

The remaining mechanicals would look petrified and hold onto each other desperately, constantly looking round and moving closer together for reassurance. To help with the tension, I would add sound effects of twigs snapping when stepped on, and animal noises such as an owl. When the characters hear these sounds, they would look round with complete terror on their face and move on, slightly quicker then before. As the actors reach the thrust, they would form a rough line, and then push Bottom forward, then running forward to him when realising they have no one at the front.

The audience would find this particularly amusing when the actors sit to rehearse their play. While they are concerned they will be too convincing, Bottom and Flute both pronounce words wrong and must be corrected. To emphasise the word misuse from Bottom ‘… For there is not a more fearful wild fowl, than your living lion… ‘ and ‘ … saying thus, or to the same defect… ‘ the characters would have a puzzled look on their faces as Bottom continued their speech. The fact that no character corrects may show their ignorance or respect for him.

Through out the scene up to ‘Come sit down every mother’s son… ‘ the characters would be nervous but at this line they would become more easy in their surroundings, yet still nervous. This then helps with the irony of what happens next. As the characters become less afraid, puck enters unseen; the audience then know something comic will come soon. I find interpreting Puck as being dark and manipulative helps enforce the slapstick comedy in this scene, as he chooses victims for his amusement.

I see Puck as small in height, mainly due to the way he walks, crouching low to the ground. He has very dark eyes but the white of his eyeballs stand out brilliantly. Puck has a tendency to rub his hands, which gives him a sinister air. With his line when Pyramus exits ‘… I will to thee appear… Puck: A stranger Pyramus than e’er play’d here… ‘ the audience know Puck has selected Bottom as his victim and wait to see how he will amuse himself. When Bottom and Puck enter again would use slapstick for the mechanicals reaction.

Bottom would enter from behind the actors so the audience could react first, Bottom would then deliver his line confidently, and over acting. The mechanicals then recoil towards the wings, falling over each other, the faces displaying the same fear the audience saw at the beginning of the scene. With Bottom left on his own, he becomes very nervous. The stage would then transform and I would add a slight purple wash on the thrust of the stage by using maybe a par can or single flood. This shows the audience that there’s a change in atmosphere and prepares them for something to happen.

When Bottom nervously sings the bed would lower. There is irony in Titania’s line ‘What angel wakes me from my flowery bed? ‘ The audience know Titania has the juice on her eyes and that to her she is being serious. I would again use the word play in Bottom’s song ‘… and dares not answer nay’ on nay the character would whiney like a donkey. This is wit and should make the audience to laugh, as it is visual also. In conclusion, I am using comedy to amuse and entertain the audience, but also it helps with the theme of victims when using slapstick.

I find that when comedy if I use it to it’s full potential and bring the comedy to a high, the following scenes would have a greater impact on the audience. The following scene is Demetrius scorning Helena, which if performed well can bring the audience to a low. The scene could be so moving, the audience feel guilty for laughing at and enjoying the previous scene. The audience could then relate to the victims in the play, as they would feel that they have been a victim of guilt themselves. This is what I would hope the audience would get from my performance. 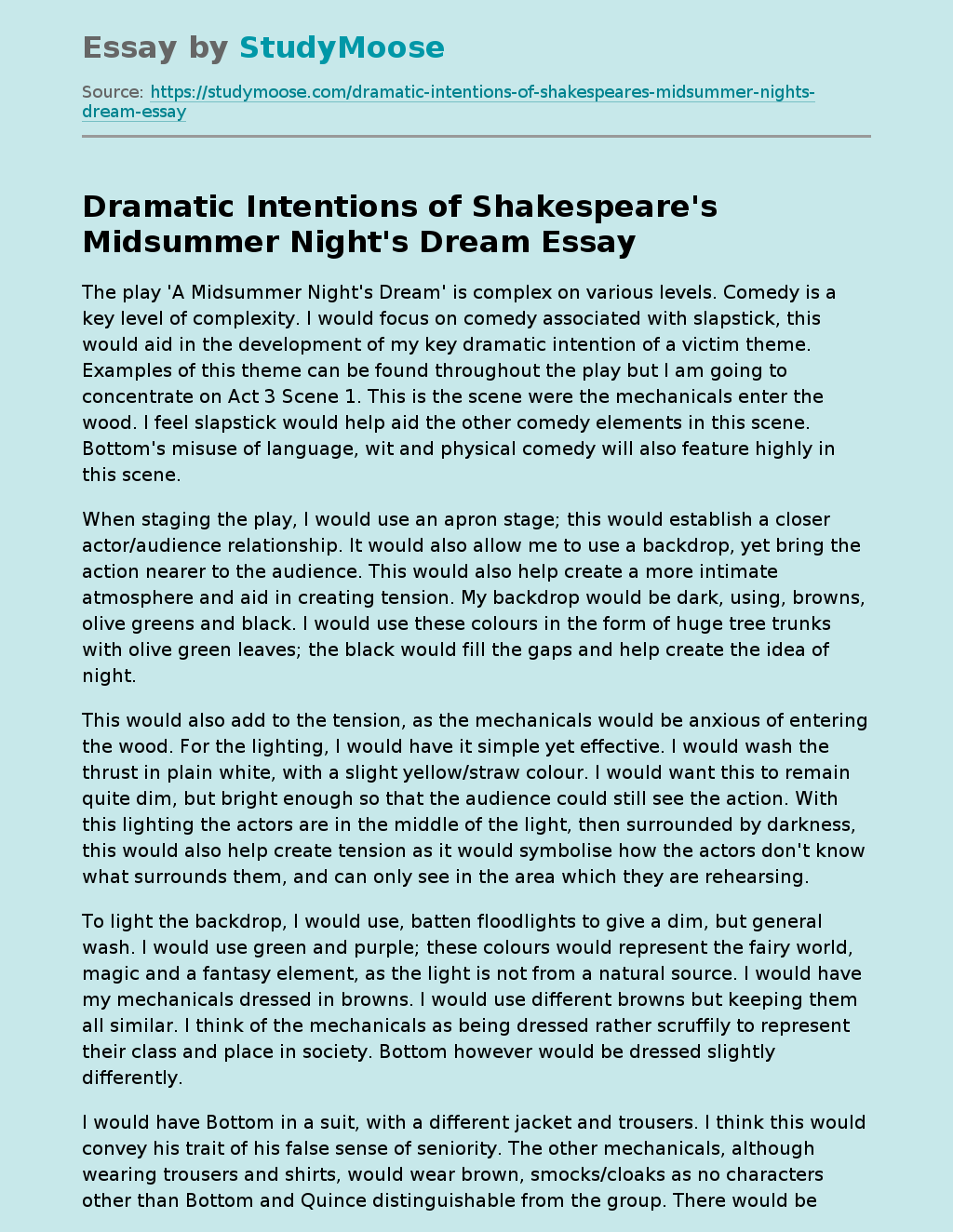