How does Shakespeare present love in 'A Midsummer Night's Dream'?

Shakespeare uses many different themes to present love; relationships, conflict, magic, dreams and fate. Overall, he presents it as something with the ability to make us act irrationally and foolishly. Within A Midsummer Night’s Dream we see many examples of how being ‘in love’ can cause someone to change their perspective entirely. ‘The path of true love never did run smooth’ is a comment made from one of the main characters, Lysander, which sums up the play’s idea that lovers always face difficult hurdles on the path to happiness and will usually turn them into madmen.

Don't use plagiarized sources. Get your custom essay on
“ How does Shakespeare present love in ‘A Midsummer Night’s Dream’? ”
Get custom paper
NEW! smart matching with writer

Shakespeare presents love through the relationship shared by Hermia and Lysander.

This relationship, at the start of the play, is portrayed as the traditional true love; Hermia chooses to become a nun instead of marrying the man her father has chosen for her such as her bond with Lysander and intentions for him, ‘I will tield my virgin patent up Unto his lordship’, and they decide to elope, ‘Through Athens’ gates have we devis’d to steal.

However, as the play develops our perception of their love differs, after Lysander is mistakenly put under a spell meant for Demetrius he attempts to pursue his new love, Helena, without any regard for Hermia, ‘Not Hermia but Helena I love’, he now treats Hermia as if she had always meant nothing to him, ‘Should I hurt her, strike her, kill her dead? Although I hate her, I’ll harm her not so’, the magic potion removes any positive emotions.

He also presents love through the dominating relationship through the father-daughter figures shared by Egeus and Hermia within the play. In the time the play was set the father made the decision who his daughter would marry because of the patriarchal society they lived in,

‘As she is mine, I may dispose of her’, however Egeus did not chose Lysander to marry Hermia, he chose Demetrius, ‘all my right of her I do estate unto Demetrius’. Despite how they expected Hermia to obey them, she defied her father’s will and fought for the love that she and Lysander shared, this shows how she was unwilling to follow society’s expectations as love empowers people to be independent and go against social norms, however Theseus, the King of Athens, warned her: ‘if you yield not to your father’s choice, you can endure the livery of a nun’, as he must enforce the law as her father’s words are absolute and if Hermia chooses to go against them she will have to face the consequences.

Other relationships that represent female power that is suppressed by male authority are the ones shared by Theseus and Hippolyta and Oberon and Titania. These two relationships share many characteristics, they both hold the title of King and Queen; Theseus and Hippolyta being the King and Queen of Athens and Oberon and Titania being the King and Queen of the Fairies but also the male dominance within the relationships. Theseus holds dominance over Hippolyta as he reminds her ‘I wooed thee with my sword’, which could lead the reader to assume that Hippolyta held some sort of authority before she was conquered by the man she is now ‘betrothed’ to.

We also see how Oberon holds dominance over Titania by how he questions her ‘am not I thy lord?’ and how he speaks of her after she has denied him what he wants ‘thou shalt not from this grove Till I torment thee for this injury.’ Even though, Titania, unlike Hippolyta, retaliates to enforce her power in the relationship ‘Then I must by thy lady’ and accuses him of ‘versing love to amorous Phillida’, Oberon is very insistent that he remains control of Titania and therefore uses his loyal jester, Puck, to use magic to humiliate her as a punishment for disrespecting him. This shows how he believes that women should obey men and follow their every command; he punishes her by forcing her, by using magic, to fall in love with Bottom who, at the time, was half human, half donkey. He does this to humiliate and shame her to make her realise that she is nothing without him.

Because Oberon believes that women are the inferior sex he sympathises with Helena, she is in love with Demetrius and is willing to do anything for him ‘I am your spaniel’ because that is also how she believes relationships should be, he appears to endorse this subservience, therefore he chooses to cause Demetrius to fall madly in love with her. The artificial love given by Titania to Bottom demonstrates how magic can duplicate the realist atmosphere given from true love as both of those involved are unable to recognise that it is false. True love can cloud judgement and Shakespeare shows how artificial love can do the same, Titania is convinced Bottom is beautiful even though he has the head of a donkey ‘Thou art as wise as thou art beautiful’. Bottom responds to the beautiful, magical fairy queen’s devotion as nothing out of the ordinary and that all of the trappings of her affection, including having servants attend him, are his proper due.

His unawareness of the fact that his head has been transformed into that of an ass parallels his inability to perceive the absurdity of the idea that Titania could ever truly fall in love with him. However, Shakespeare uses Bottom to draw the audience’s attention to serious themes, such as the relationship between reality and imagination. He is also the most down-to-earth character in the play as he does recognise that Titania’s statements about him aren’t true, when Titania devotes her love to him ‘On the first view to say, to swear, I love thee.’,

Bottoms responds with ‘Methinks, mistress, you should have little reason for that’, also when Titania states ‘Thou art as wise as thou art beautiful’ Bottom corrects her with ‘Not so, neither: but if I had wit enough to get out of this wood, I have enough to serve mine own turn’, showing that he knows love and reason don’t often work at the same level. Shakespeare also uses Bottom to remind the audience of a recurring theme in the play: whether love and reason can relate, and should love be based on reason or fantasy? Shakespeare also presents love through conflict, for example, the friendship shared by Hermia and Helena show how even best friends since youth can be turned against each other when love is involved.

Shakespeare wants to show the audience the great friendship they share ‘Is all the counsel that we two have shared, The sisters’ vows, the hours that we have spent’, ‘As if our hands, our sides, voices, and minds Had been incorporate. So we grew together,’, this then allows the audience to understand how severe love can be and how their strong friendship quickly disintegrated when they became involved with the two men; their entire childhood together is forgotten in an instant as they both begin to argue, Hermia feeling cheated and thinking Helena was the one to blame ‘O me, you juggler, you canker-blossom,’ and Helena, thinking it is all a cruel trick against her ‘Lo, she is one of this confederacy. Now I perceive they have conjoined all three To fashion this false sport in spite of me.

Shakespeare wanted the audience to realise how the magic within the play isn’t all to blame for the conflict as it is not the love potion which has had this effect on the women directly. Their relationship has changed completely, their friendship before the argument contrasts greatly to the hostility afterwards, all caused by a mischievous spirit. Shakespeare presents love through the fairies’ magic which creates the comedic atmosphere given throughout the play. Shakespeare shows how magic distorts true love by how easily Demetrius’ and Lysander’s hearts are manipulated by Puck’s magic potion.

At the beginning of the play Shakespeare makes the effort to show the audience the strong and loyal love Hermia and Lysander devote to each other, ‘I am beloved of beauteous Hermia’ is how Lysander speaks of Hermia before the love charm is cast upon him. However after it is cast he expresses his feelings for his new true love, Helena, almost immediately, ‘Not Hermia, but Helena I love!’. When Lysander fights for Helena Shakespeare purposefully makes it almost impossible for the audience to tell the difference between the two men, as he wants them to know that all foolish young lovers are alike.

How does Shakespeare present love in 'A Midsummer Night's Dream'?. (2016, May 09). Retrieved from https://studymoose.com/how-does-shakespeare-present-love-in-a-midsummer-nights-dream-essay 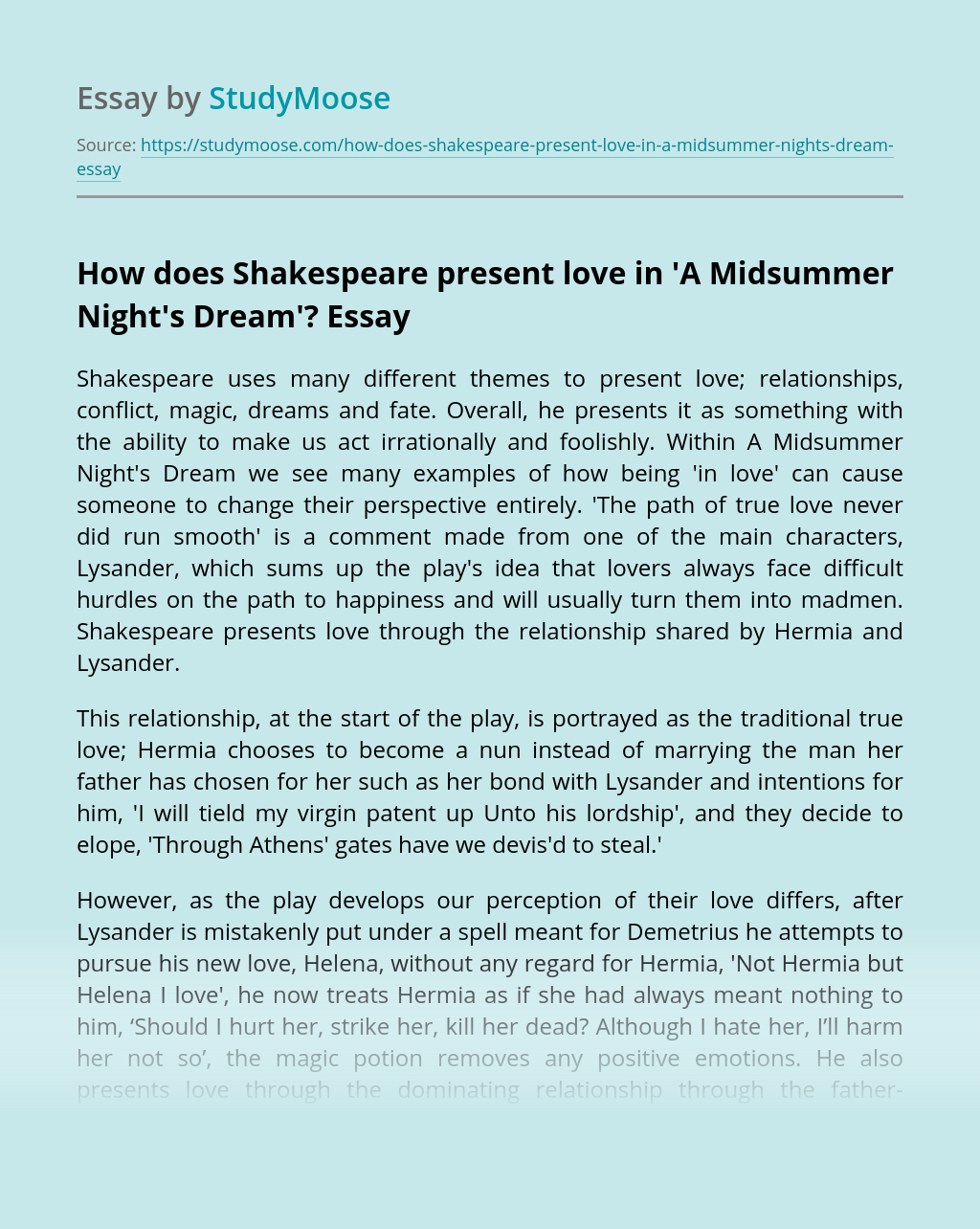