William Shakespeare is the greatest English writer, who is also known as The Swan of Avon and who brought a great series of innovation in the domain of literature. He wrote 37 plays (comedies, tragedies and histories), 154 sonnets, 2 long narrative poems and other verses. He wrote in lines, even if we speak about prose.

A Midsummer Night’s Dream is a comedy which Shakespeare wrote between 1595 and 1596 and is a creation that uses irony to express certain ideas regarding the real world.

Don't use plagiarized sources. Get your custom essay on
“ The Symbolism of Names in “A Midsummer Night’s Dream” by William Shakespeare ”
Get custom paper
NEW! smart matching with writer

It is also full of meanings thanks to its references to mythology and other well-known historical characters or personalities. An important aspect regarding this point of view is the symbolism of names, which William Shakespeare inserts in his writing.

The Symbolism of Names is the topic I have chosen to tackle in my essay due to two major reasons. And those are that not only do the names of the characters dare us to make research in the history of the world, with its myths, mythology and personalities, but also because we are offered the chance to have a better understanding of some of the character’s occupation from the very beginning through this specific aspect, their names.

To begin with, Oberon is a very interesting character, because his name is a link to more than one source in the past. In the first place, one would be tempted to say that it is all about a character in the Medieval and Renaissance literature, the King of the fairies, as it is actually mentioned in the list with the characters, right before the beginning of the play itself.

Oberon’s position as king of the fairies comes from a character of the Germanic mythology, Alberich, a legendary sorcerer belonging to the history of the Merovingian dynasty. In the Old High German, alb- means elf-‘and -rh means “ruler”, “king”. In the Nibelungenlied, a 13th-century Burgundian poem, Alberich is the guardian of the Nibelungen’s treasure, but Siegfried manages to overcome him. This aspect can be linked to Oberon’s attitude towards Titania, his wife and Queen of the fairies. At the beginning, the two are in a dispute, because of the custody of a child Titania had been given by a mortal friend, Oberon even uses magic against his wife, making her fall in love with an Ass-headed creature, but, they finally end up together again. So, just like Alberich is overcome by Siegfried, Oberon is overcome by the love he and Titania have for each other.

Furthermore, the second interpretation of the character of Oberon comes from the early 13-century French heroic song entitled Les Prouesses et faitz du noble “o” “Huon de Bordeaux” Huon de Bordeaux, which offers details regarding its physical appearance. Huon, son the Count of Bordeaux, is described as being dwarfish in height elf, yet very handsome. Making a connection with Alberich, who is portrayed as a dwarf in the Nibelungenlied, the name of the King of the fairies in Shakespeare’s creation is thus explained.

To continue with, the name of Titania, Queen of the fairies, is very well chosen, depicting her power within the world of the immortal creatures, being given that it makes one think of titans (coming from Latin: Titan, -anis), huge beings with extraordinary powers. It also leads to the Middle Ages, where Titania is the queen of the fairies in the medieval folklore. Still, Titania’s power is emphasized by the fact that her name comes from “titanium” as well, a chemical element in the shape of a white powder used for the fabrication of special steels due to its great durability and high covering power.

Also, Puck or Robin Goodfellow is another interesting character. Possibly, his name comes from pouke, a word which in the 13th century meant “devil” or “evil spirit”. The name is relevant for the Shakespearian character, because this mischievous fairy loves to always play tricks on the others with no reason, but just for personal pleasure.

What is more, the names of the human beings are related to the Greek mythology, such that Theseus is the Duke of Athens, a name and a position not randomly chosen, as Theseus was considered to be the greatest Athenian hero. By his side, there is Hippolyta, Queen of the Amazons, again a name with strong resonances, the leader of the women warriors, who were defeated by Pirithous and Theseus and finally, the latter married her. Still, a character which does not respect the source of its name is Egeus, coming from Aegeus, king of Athens and father of Theseus. This character’s name meets with degradation, being given that in mythology Aegeus had a high social position and in this play he is only a citizen of Athens, father of Hermia.

All things considered, the names that William Shakespeare used in A Midsummer Night’s Dream are ways of telling something about them before the beginning of the action itself. And it is important to search for information about them in order to understand Shakespeare better, to interpret or to perform his plays properly and even for our own knowledge development.

The Symbolism of Names in "A Midsummer Night's Dream" by William Shakespeare. (2019, Nov 23). Retrieved from https://studymoose.com/the-symbolism-of-names-in-a-midsummer-nights-dream-by-william-shakespeare-essay 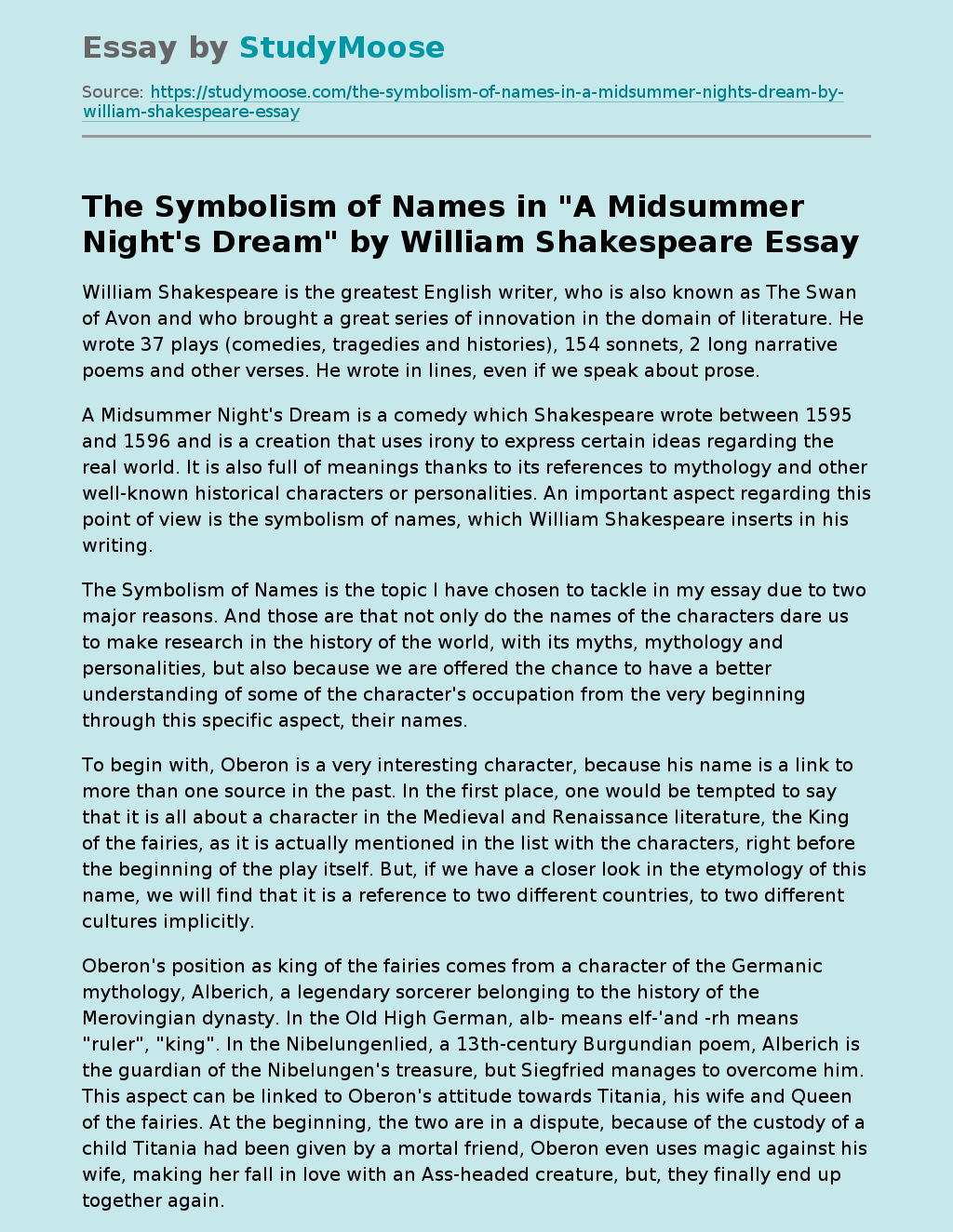